Hi there, firstly, I like the Auto-tag and auto-replace functionality, Thanks for including it.

This is not a major bug by any means, but just to highlight

with the test functionality

In the test window, typing the word aftermath term is not highlighted, however in a post, it will show as afSemesterath

Apologies in advance, as a new user I can only embed one image, so this may be a little out of context as I joined my 3 images together 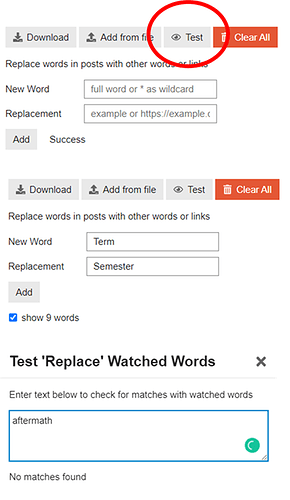 to the Auto-tag and auto-replace

I can see that this would be less common, but I personally have a Number of uses for it.

Thanks in advance for your time and reply

This bug is definitely happening, thank you for the report @pilgrimsmaster

Priority/Severity: I don’t think it’s too severe, but it definitely could cause an impact. Any section of a word that matches gets replaced, it doesn’t affect only compounds but any word.

Platform: Tested it in Discourse version 2.7.0.beta7, in safe-mode.

Description : When a section of a word matches a “watched word” it is replaced by the “replacement”, making the original word loose its meaning. For example, if ask is a watched word that should be replaced by question, and I type basketball in my topic, it will be replaced by bquestionball.

Create a topic with any long word, for example sunglasses: 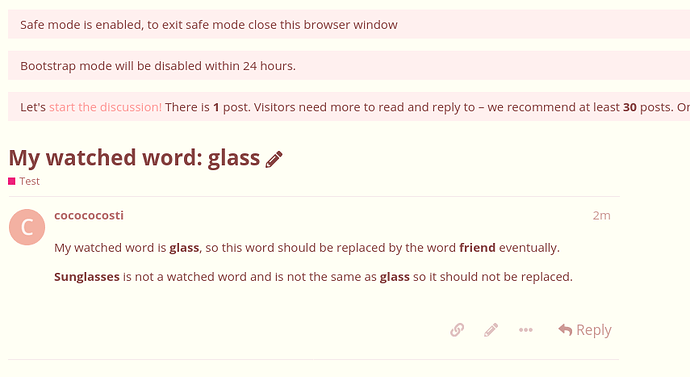 Go to Admin → Customize → Watched Words → Replace. Add a section of the previous word as a watched word (for example glass) and add any other word as replacement (friend in this case): 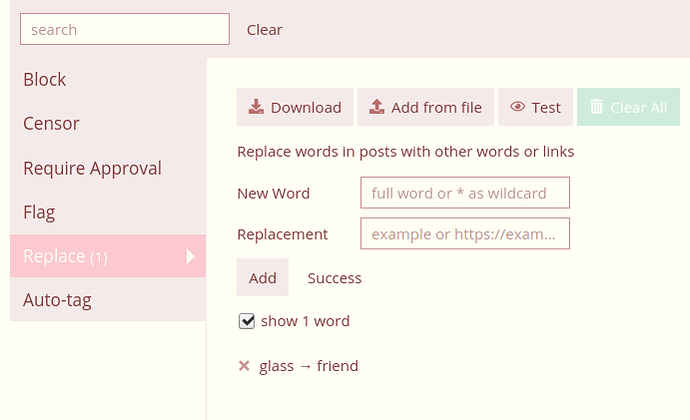 Go back to the previous topic and you should see the word was modified. It says sunfriendes in this example: 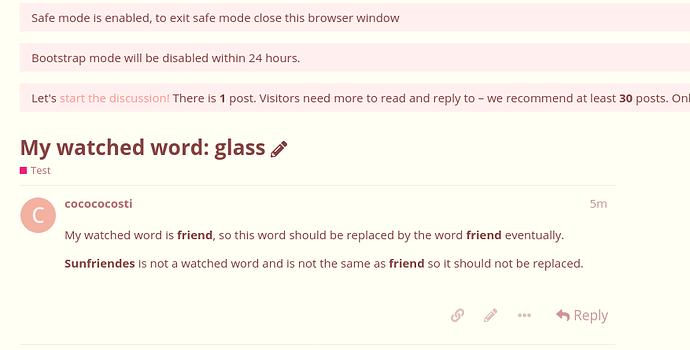 When testing in the settings, it works correctly: 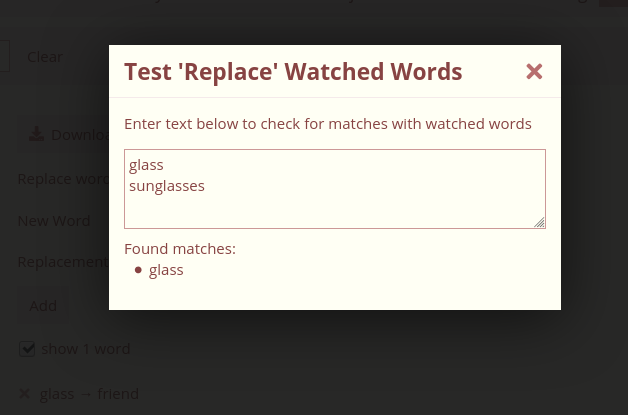 Note: someone pointed out here Where is auto-tag and auto-replace? - #7 by techAPJ that the feature doesn’t work in titles, which is true as you can see in the previous example. But that is a different issue.

I appreciate the prompt and thorough reply.

Any thoughts on the other 2 “Requests”

to the Auto-tag and auto-replace

I can see that this would be less common, but I personally have a Number of uses for it.

@pilgrimsmaster I found this post: Could someone tell me about Discourse regexes? - #9 by justin

As suggested there, you could use regex to solve the issue we’ve been discussing here. Check @justin comment at the end of the topic.

Thank you very much for that, I don’t think I would have found that on my own.
I appreciate your time and effort