Ability to Ignore a User

I agree. We see great value in ignoring also hide the topic titles, as we cant afford to have the extensive moderation needed, not to mention the particularly sensitivies of each member

If Discourse does not agree that it should automatically hide the topic titles, then perhaps it can be a community setting to show or not. Not sure if it’s a performance issue for not implementing this way? 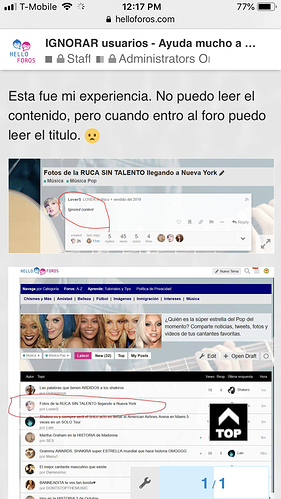 6 posts were split to a new topic: Ignore does not work on megatopics

It would be useful for moderation purposes to have a “watching” option which would notify you whenever the user posted.

Have a look there:

GitHub: GitHub - discourse/discourse-follow: A Discourse plugin that lets you follow other users.

I believe I remember there was a discussion about having the followed user NOT being notified. I don’t remember if it’s now possible or not.

@tempogain , there is another way I just discovered which may be of interest to you: You can also use the “saved searched” plugin and enter the users there (simply enter “@user” alone as a saved search). You will get once a day a private message from “System” with all the posts from that user. Possible cons = there is a delay as you only get notified once a day (it may be a pro depending on how you see it) and you may be limited by the number of saved search you can enter. See:
https://meta.discourse.org/t/saved-searches-plugin/67901/56

It’s great to see the ability of ignoring users come to Discourse! I’d love to see one more option - block.

So the options would become Normal - Muted - Ignored - Blocked

If we had this facility I would use Discourse on one of my forums that has more interpersonal issues than any other forum I have managed! (Yes it’s a nightmare!)

It would also make the life of moderators a million times better as well as minimise members getting annoyed for being 'moderated/suspended/ etc.

It really would be very helpful!

We’ve had this discussion many times and it’s a tricky one. Blocking someone goes against our philosophy of civilised discourse and good behaviour online.

If someone behaves so badly that they need blocking, why are they still allowed to be a member of the community?

I would normally agree with you Sarah, but unfortunately it’s a fact of life that some people won’t see eye to eye, or a break down in relations will a reach a point beyond repair - this is more likely to occur the longer a forum and its members have been active.

There are also some forums which are more likely to see animosity develop between members because of personal circumstances of the people that the forum might be aimed at - people who are sick and the elderly to name two, might have mental health issues or less patience than what we might like.

Sometimes the behaviour is borderline, sometimes what somebody posts just grates on somebody else over time (political threads are some of the worst) and sometimes, if you expect people to live by your moral values you may not have many people left on the forum. (This is not just the way somebody conducts themselves, but viewpoints - many people harbour points of view that are unacceptable to others - yet perfectly ‘legal’).

You might want to go on a forum but not see the posts of someone who ‘kills animals for fun’, or someone who thinks equality/‘gay marriage’ is wrong, etc. That’s ok - we shouldn’t have to like, nor have to respect everyone - we can respect that everyone has the right to believe whatever they want to believe (so long as they are not breaking the law), but we don’t have to respect or like them, and ideally we don’t want to be reminded of them every time we visit a forum that has many of your friends or so much else to offer.

It’s not something you would see used often in all forums, but on some it would be very welcomed or even a necessity.

Debate aside, I’m fairly sure this isn’t something we ever plan to do, but ultimately that’s @codinghorror’s call.

…and unfortunately that’s what happens - the ‘nice’ people end up leaving because it’s difficult to be around those who continually share views you might find morally reprehensible. (It’s a lot easier for people to ‘tolerate’ kind decent human beings who care about the planet and all it’s inhabitants, than those who hold bigoted, hurtful or damaging views which may verge on being hateful or harmful, irrespective of whether those views are considered legal or not).

It’s not a feature I need for any of the Discourse sites I currently run so can’t look at mute stats - I do know however many users have requested being able to block others on other forums I admin, and we have often had to resort to a ‘mutual block’ where we PM the users involved and tell them they may no longer contact each other/refer to each other/post in each other’s threads etc (if they do, they get banned permanently). We do this in cases of alleged bullying or where relations have broken down irrevocably. Even if we don’t think bullying has taken place, we must still show that we acted to prevent it - this is particularly important if either one of the parties may be susceptible to self-harm.

The Discourse sites I run are a lot more focused on a topic so it’s easier to say the forum may not be used to discuss contentious off-topic topics, and since they are tech communities we also adhere to language Codes of Conduct or apply our own (so no homophobia/transphobia/content that might make women/minorities feel uncomfortable etc). That’s not possible on a forum where any legally permissible topic is allowed.

Live loaded posts from Ignored users are still not being ignored on our forum. This is after a refresh and in a topic with only 500 posts. If I navigate away from the topic and come back, the posts are ignored
https://meta.discourse.org/t/ignore-does-not-work-on-megatopics/130915/3 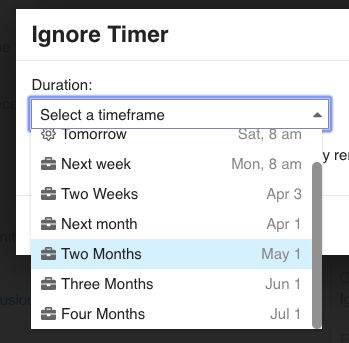 I understand that probably 4 month limit when ignoring is some kind of motivation to “reunite” the community, but our users absolutely hate that there is no permanent ignore. Can we please get permanent ignore as an option? If you don’t want to allow it by default, let’s give it admin settings to “allow users to permanently ignore user”.
Thanks!

You can try a CSS selector like this if you really need to do this (not recommended).

Note, this is not completely tested, so check to make sure it is not hiding anything else you want visible:

If you really need to use something like this (not recommended), make sure you test it and tweak as required.

@codinghorror six months is better than four months… but would you be willing to read my message here and then consider a “forever” option? Also note that I manage all blocks via the API, so even if the “forever” option isn’t in the UI, it would be great if it were still an option on the back-end.

(In general I understand why y’all don’t want to make blocking more robust. But there are use cases-- like mine, and perhaps @AstonJ’s, who makes a very compelling case above– where it is useful.)

I think 4 months is ‘little’ time sometimes. I have ignored someone on another forum for 4 months But repetitively I have to keep ignoring them again after 4 months. So I would support a forever option. Or at least if you don’t like that a 6 month option as you suggested above.

I still feel we need a proper block function - there’s too much pressure on the site and its team otherwise, particularly for large/busy forums.

I still feel we need a proper block function

If you need that, time to switch software. It won’t be arriving any time soon.