How to find and amend un-translated strings

I know that badge system, or the tag system, or some parts in the profile pages do not have Persian translation and texts are not translatable via admin panel, but since they’re not plugins and are parts of the source code I don’t have any idea where/how to find them and how to add translations.

In this case, you can add the missing translations yourself on Transifex, which is an independent online platform/service used by the Discourse team to manage translations.

For example, the current status for Persion is as follows:

may you guide how you find not-translated strings?

In general, there are a few reasons for an English label in a localized instance:

In order to investigate this, you can…

I saw what you added to the above file, but I couldn’t follow it and find out my way.

I have to say this was a rather special case, but basically I looked for “Berechtigungen” (which I saw in the screenshot and is German for “Permissions”) in Transifex. This lead me to the I18n key admin_js.admin.user.permissions (see below). Then I looked for the key in the code and found it (without the prefix admin_js) here, from which the lines referenced above weren’t far away. 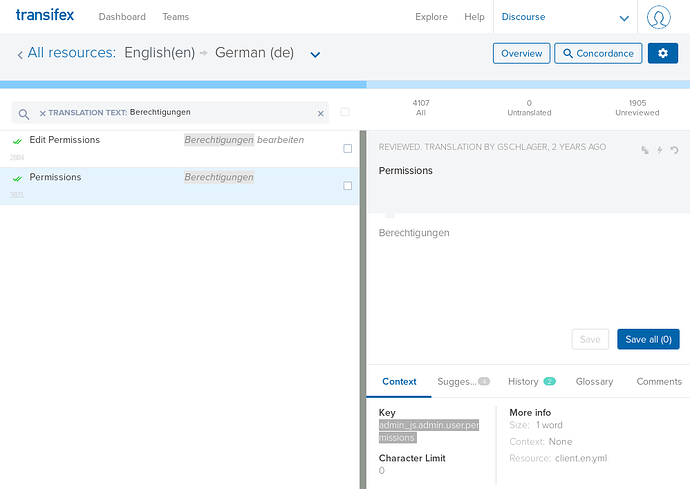 Many thanks Class for the detailed and complete answer,

I’ve gone several times to transifex and couldn’t use it, I’m not sure why. I’ll try it again as it seems to be the best way.

I’ve gone several times to transifex and couldn’t use it, I’m not sure why. I’ll try it again as it seems to be the best way.

It definitely has some nits and it can be a struggle at times. Here’s my workflow:

Feel free to ask questions in #dev:translations if it doesn’t work.

The search field is very bad from a usability viewpoint.

this was the main reason, as I tried again now and I couldn’t find the string I was looking for until the fifth trial!

Now there’s even more important thing: in Persian I looked for the term group with no translation, in the client side. here is what I found:

as shown above, there’s at least one suggested translation for each string. though they are good translations, they’re not accepted. how can I help to those translations to get accepted?

Even a bad translation in transifix is better than no-translation; as when there’s no translation there, one can not customize the text in the admin panel.

as shown above, there’s at least one suggested translation for each string. though they are good translations, they’re not accepted. how can I help to those translations to get accepted?

As far as I see, you should be able to apply the suggestion with the copy symbol on the right. A suggestion usually does not mean that it’s not accepted, but rather that the string had already been translated before, but with a different key. Especially when a key changes (e.g. to fix a typo in the key itself or to improve the structure), this means that a previously translated key can appear untranslated again.

here is the result for transifex, admin panel, and final result of the term for groups in the menu items:

1- in the transifex project, it has been translated: 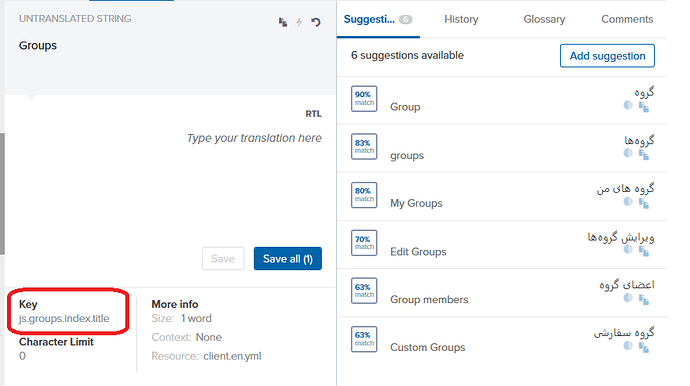 2- in the admin panel, I translate it myself as well:

3- and finally in the menu it’s still not translated: 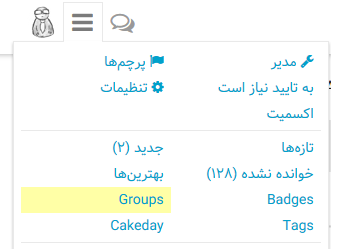 and since this happens several places in the forum, it’s becoming little bit ugly

Do you have any idea what I can do ?

That is a weird problem that is being discussed eg here:

Just musing out loud here, but I wonder if we could do a better job of onboarding translators by including a call-to-action in any un-translated string.

On any un-translated string, link here and to the main tutorial.

If at all possible, it’d be so cool if an untranslated string on Discourse could expose a “translate me” link pointing directly to its untranslated resource on Transifex, similar to how some doc sites invite users to suggest edits on GitHub: