Some questions about staged users created by incoming email

I have been continuing my experiments with group inboxes and incoming email, and today came across an odd and perhaps not so great situation - see screenshot below. (this looks like a scam email but in this case actually it is not - we get alot of this sort of thing in my community and it’s fairly important for us to deal with them on a timely and discreet basis… one great reason to get staged emails and support inbox working properly)

So it appears M wrote an email to a bunch of people requesting help and included our support address. The number of staged users that can be created by incoming email was limited to 3. So it created a staged account for M along with the first (I guess) 2 additional email addresses it encountered in the cc list.

In this particular case, I think I would not want the incoming message or the reply to be seen by anyone but our team and M. Even if M wrote to a bunch of people some of whom might already be members of my community. But in other cases, it may not be such a bad thing. In no case would we want anyone else to see an error notification like the one attributed to M in the screenshot saying “Reached maximum number of staged users created per email”.

So I guess my questions and comments are: 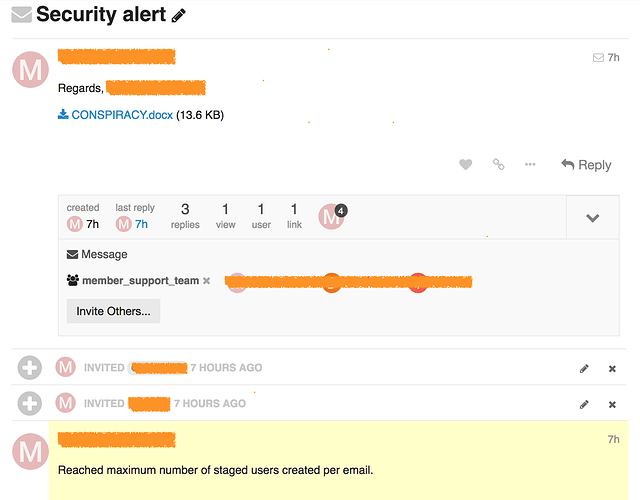 Is there any particular reason to limit the number of staged users created to 10, the default? Can it be higher?

Search for maximum staged users per email in your site settings

Search for maximum staged users per email in your site settings

Thanks, but I’m aware of the setting. I am trying to find out what is the recommended setting. Phrased differently… given the current functionality, my question is what are the pros and cons of having this set at 1 vs 10 vs a higher number?

My current gut instinct is to set it to 1 to avoid additional staged users from being created, and additional non-staff members from being invited when someone writes to our support email. This is what I’m going to do right now.

But I haven’t tested every scenario and want to be sure I am not opening myself up to unexpected problems or missing out on great opportunities.

We use incoming email here at Discourse for support - team@discourse.org is a group inbox here on Meta. With our workflow maximum staged users per email being set to 1 would not work, many users aren’t contacting us by themselves, they might CC a teammate or supervisor to chime in on a topic, or perhaps someone in accounting for finance questions, or IT/engineering for DNS or other concerns.

In short, people CC others for many reasons, limiting staged users might not cause problems for you, but could cause unintended side effects to those emailing in.

Thanks, Joshua! I presumed as much and appreciate the explanation of how you use incoming email. I’m feeling like I’m pretty close to figuring this out and knowing if it will work for us, so bear with me.

So what happens if one of the people they cc are already users signed up on your site? Does this not mean they will be notified of the incoming message via discourse, and they will get any replies via discourse personal message? Have you had any issues with people being confused about that, or is it a learning opportunity?

Have you had any problems with the people you reply to (or their email service) thinking your replies are spam, since the reply-to address is not a straight up email address but a discourse generated address containing a long hash of random characters? See screenshot below - google seems to think it’s from a mailing list. Also the email has an extra bit of discourse generated info at the top of it, as I point out in this post with a screenshot.

Instead of tweaking the number of staged users, might it be better to change what triggers the notification? eg. Instead of a reply, they must be explicitly mentioned.

Sure - that’s an interesting idea. But would staged users welcome or understand mentioning, since they likely have never logged into a discourse site before or understand why they have a username in the first place?

In the case of my screenshot in the OP, I checked the outbound mail log and saw that the other staged users did not get notified by the error notification. So there seems to be something in place to prevent that from happening at least. But I’m pretty sure that if I replied to the message that the others would get the reply too, unless I removed them from the message first.

… so for now I will stick to 1 staged user being created until I understand it better.

So what happens if one of the people they cc are already users signed up on your site? Does this not mean they will be notified of the incoming message via discourse, and they will get any replies via discourse personal message? Have you had any issues with people being confused about that, or is it a learning opportunity?

I’m honestly not sure without testing this myself. I’ve only been on the email side of this once before, and I wasn’t CC’ing anyone. My assumption is that existing users will be invited to the PM, but I’m not sure what the notification level will be.

Have you had any problems with the people you reply to (or their email service) thinking your replies are spam, since the reply-to address is not a straight up email address but a discourse generated address containing a long hash of random characters?

Not that I’ve seen. I’ve been very happy with how the team inbox has worked since joining the team last month. I spend a great deal of my day in it. My biggest complaint was that sometimes multiple team members would write a reply, and we could get a double post/email. Fortunately, Discourse Presence - "Who is writing" is now in core Discourse, so we can see when others are typing and not write a duplicate reply.

Thanks, Josh! I’ve now stopped my experiment for a bit - disabled staged users, deleted the ones that got created, deleted the group with incoming email address and removed the forwarding to the discourse mailbox. It’s been interesting and staged user functionality shows alot of progress! I will return to this but wait a bit until the functionality gets filled out some more and these questions get answered.

@zogstrip let me know if you want me to submit some feature requests as I mentioned in the OP. I think they might help.

At my current stage with this experiment, I basically don’t ever want to have staged users created unless I am emailing out to them from a new discourse message. Should I set the “maximum staged users per email” setting to 0? Will that still work?

Another possible fix is to reject emails with too many CCs and a reply key, and also invalidate that reply key (since it just got sent out to a bunch of people…)

Emails to an ‘in’ address are a bit fuzzier…

Thanks @riking that would make sense. I would basically nwver want a staged user created via reply key.