User is not promoted to TL3 after manually triggering Jobs::Tl3Promotions

I have a user who according to the criteria in his profile, is due to promotion:

(sorry for the Greek 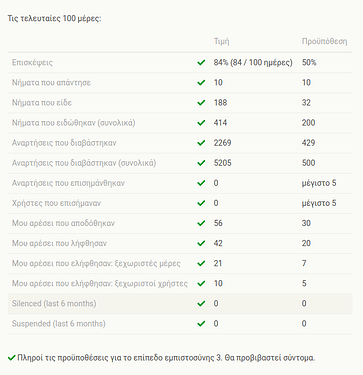 But when I manually trigger the Jobs::Tl3Promotions job through sidekiq, the user is not promoted. I checked the logs, but nothing failed.

Why can this happen?

Wait so after N hours this just corrected itself?

No, I waited N hours, nothing happened and then I manually promoted the user myself.

I’ve checked the logs, nothing fails (at least loudly)

No, I waited N hours, nothing happened

Then this is a different issue, the user is not promoted due to some other condition that is not specified. Perhaps you had the users trust level locked?

Unfortunately no… We haven’t locked the trust level of any user in my community. Although I just double checked if there was such a case.