Why do I get a discobot promotion notification & message as admin for EVERY user that is TL promoted?

Why do I get tens of the same promotion messages as admin?

Only this one admin account gets hammered by these messages.

And adding the user to discourse narrative bot ignored usernames does not help either.

Still getting the messages and it does not stop.

Rebuilding the app did not help… message onslaught continues.

And you’re up to the latest Discourse code? I saw a similar bug a few days ago.

Yes the very latest, and just confirmed it.

I do get a personal message from discobot for every single TL2 promotion of another user.

But other admins don’t, just this one admin does.

Other admins get the grouped notifications:

This “Lukas” admin on the other hand gets the grouped notification plus a single discobot notification and message in the personal inbox for every user that gets TL promoted. Looks like a bug to me. 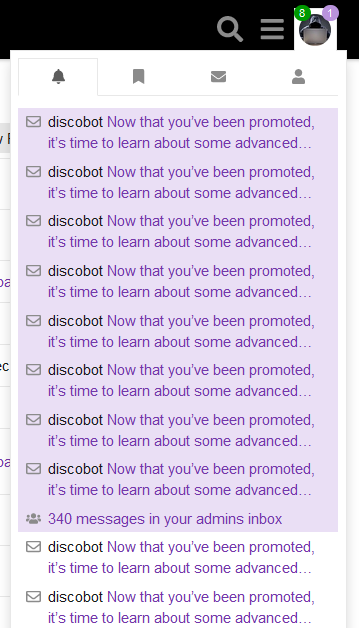 And Lukas has the same “Tracking” option enabled for admin messages as all the other admins: 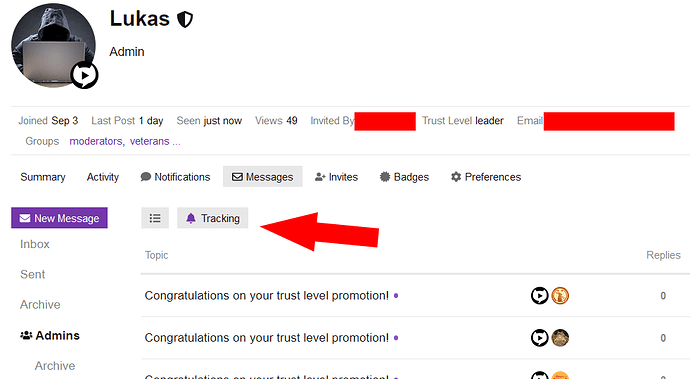 Only this one admin account gets hammered by these messages.

Is the admin that’s getting the messages the user who has been added to the site contact username setting?

Nope, a different admin is put in this field, and the one configured does not get all those notifications and messages from discobot.

I found the "error"

And it was my fault

Thanks @simon for pointing me in the right direction

I added the “admins” group to site contact group name

Removed the group now and the discobot messages stopped.

However, the other two admins are also in the same group and did not get the same messages.

So something still not working as intended here? Why did not the other two admins get the messages as well although in the same group?