Allow moderators to add a member to a group?

Should this be a ‘feature request’ then?

The trouble is that some groups may not be accessible to moderators, so its a little bit tricky.

I know that we want to steer clear of the full-on permissions / roles system that the like of phpBB have implemented.

But there is probably a reasonable use case of some simplified control where a user within a group could be a group leader. This user could be allowed to invite other forum members to said group.

This would probably sidestep the whole issue of moderators having access to certain groups then. No?

This user could be allowed to invite other forum members to said group.

We already have code to do this @sam for staff. If there was a special flag on an account, perhaps they could also invite to only groups they are already a member of? Or a group could be set to “allow anyone to invite in?”

I know it’s been said multiple times that you guys want to avoid an overly complex role-based permission structure and that’s laudable, but by removing the concept of a global moderator, you’re just making more work for the forum admin. Ideally you have few admins (maybe one or two) and scale up moderators as needed, but in a large forum that has lots of groups, the small number of admins still have to manually assign users to groups—something that arguably isn’t an administrator task.

I should need admin privilege to modify core settings, but not to swizzle group membership. To create groups, probably; to add users to them? Not IMO.

@codinghorror’s solution of either open groups or allowing mods to invite users to groups they’re already in are two potential workarounds, but they’re not necessarily desirable. A better idea might be to either allow for the concept of group ownership by any user, or require a group to be owned by a moderator. The group owner could then add and remove users from that group.

It’d be sort of like per-category admins, but targeted at groups instead of categories. An admin could create the group and set its initial owner (including to the admin themselves if desired), and then the group owner could go do the rest of the assignments.

Alternately, enable a “global moderator” flag where a moderator so flagged is allowed to moderate all categories and modify group memberships.

It’s obviously a feature I can live without, but the workaround I’m using on my own forum is just to throw up my hands and give all my mods admin powers. It’s not a good workaround, but there’s no other way right now to do what I want.

I really like the idea of being able to assign specific group administration to any user. Wouldn’t want to affect the impressively elegant way Discourse deals with administration and moderation fundamentally.

Thought to suggest a solution that avoids making adding users to groups the responsibility of moderators and that brings users into groups organically without an additional invitation mechanism. In the “Edit Groups” admin panel there might be a “Group administrators” add user box below “Group Members” (and above “Group is visible to all users”). Users added to this box by the admin (or, potentially, by an algorithm) would receive a trophy next the group name on their profile. If a group admin clicks through to the group, s/he will find an “Administer” item below “Members.” This would give access to the admin Edit Group options page for the group (i.e. “Group name,” “Group members” add/remove user box, etc.). In the case of a group admin, the user list for potential additions to a group might be intelligently circumscribed (e.g. those invited to a topic by a regular user within a category the group has permissions to; those invited to the forum by a group administrator; those that have sent any PM to the group admin). Just a thought. Not sure how tricky to implement or how desirable for other installs.

But there is probably a reasonable use case of some simplified control where a user within a group could be a group leader. This user could be allowed to invite other forum members to said group.

We already have code to do this @sam for staff. If there was a special flag on an account, perhaps they could also invite to only groups they are already a member of? Or a group could be set to “allow anyone to invite in?”

This solution looks great, will it be soon implemented ?

Reviving this discussion, over here:

Reviving this feature conversation. Group administration is troublesome when the group is large. The client currently sends the entire updated membership list to the server whenever there are any changes, and the server has to figure out what has changed. I propose: paginated viewing for group membership incremental adds and deletes for group membership This is to set the stage for a new “group owner” role that can be designated on a per-group basis. A group owner should be able to add…

I’m back to wishing for this and today could really have used it.

I’d love to be able to assign invitation privileges on the security settings page for categories, e.g. an option to give invite/create/reply/see privileges. I’d then create a group with the users that would be given this privilege.

Hi there,
Is there any progress on that one?
I find it a bit disappointing that groups cannot manage themselfs.

I find it a bit disappointing that groups cannot manage themselfs.

What exact “management” abilities are you thinking of?

If you made them Moderators they could be able to do a bit too much.

Maybe what you need are more Moderators for the forum and not per group?

I would like to have multiple groups hosted on my discourse instance. I would like to asign group administrators for them so they could manage adding/ removing users in their groups for example.

As I see it is working now is that only discourse administrators can do that, which means the groups are dependant on reaction time of admins and are not free to manage their group. If i would make them (group admins) discourse administrators, they would have complete access to all the groups which is something I (or anyone) wouldn’t want to have as in most cases I dont even know personally the people.

This type of group invite scheme would be useful for us as well. We use groups to determine certain roles/privileges in our community, and those “groups” should be able to add people into their group as needed.

Just like Loomio does. I know those two projects have quite a different purpose (although it would be awesome to see them combined one day) but they way Loomio handles group management makes it possible to serve discourse as a truly independent forum platform.

I would also love to see a feature for assigning group admins. Has there been any progress on this?

@codinghorror @eviltrout is this feature going to make it, I also have a bunch of moderators, but I don’t want to make them admin just so they can move users to different groups…

@sam You lost me…

My question was in relevance to having a user as a moderator:

being able to add users to groups themselves… 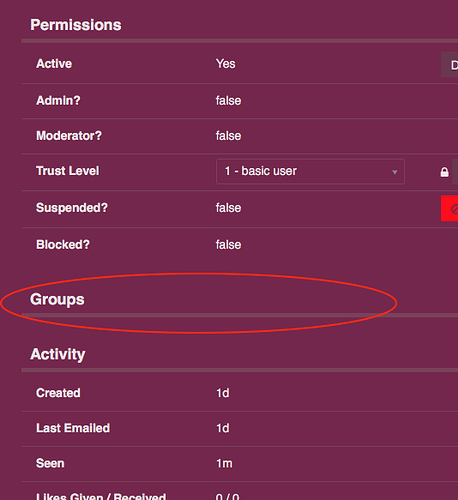 Which right now they can’t… Could you explain me how exactly I do this? I pasted you some screenshots of one of my users who is a moderator (first screenshot) and when he goes on someone else’s account to add them to a group what they see is not being able to add them to groups…