In this post @codinghorror horror mentioned that on StackOverflow there is some logic that catches users trying to post unformatted code (“there are a lot of unusual [ and { characters per line, etc)”) and then block them from posting until they format it.

He also mentioned that there already was some discussion on writing such a plugin, but I couldn’t find it - so here is a new topic.

Does anyone remember the former posts about this?

If not, I will try to refine the idea a bit, see how SO does it etc to effectively write a spec how this plugin could/should work. (Unfortunately, I have no idea how RoR works etc, so I can’t code anything of it myself.)

Here are my Canned Replies to handle this manually, that could be used as starters for the text people are shown:

Anyone know where to find anything about the feature @codinghorror mentioned?

@naveedahmada036 posted an example for a Slack plugin that does something related:

No one? I’ll love to throw myself in, also this slack app could be good starting point for writing discourse plugin. https://github.com/yoeo/pasta 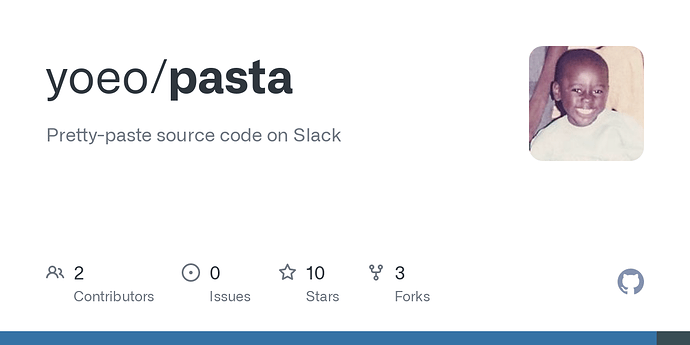 Pretty-paste source code on Slack. Contribute to yoeo/pasta development by creating an account on GitHub.

So having thought about it a bit, I think these are the possible basic ways to implement it:

I think option 3) is out of scope here and more a moderation or community management thing that is probably better be handled manually by moderators or with another plugin. Leaves 1) and 2).

#1 would require monitoring the paste events, analyze their content and then some interface for the next step. Alternatively the code could also automatically be wrapped in the correct formatting, but this adds a lot of complexity (what if someone pastes code into an already existing code block?). But this would also be the most newbie friendly way.

#2 would require analysis of the text to be posted. Again some form of interface would have to be applied to inform the user of his options or, again, some logic could try to add formatting to the post automatically. This would be very convenient for the user, but quite complex to implement (Is this 1 or 2 code samples? Code block or just code in text?)

The “Somehow make it formatted”, “handle it” and “interface” refers to the possible variant of the second step of the process. This would probably have to include some “error” or “notice” to the user:

Seems you are trying to post code.
Please apply ``` around it to format as code.
Or select the code and hit the </> button to format it automatically.

Then this could maybe highlight the toolbar button to format as code.

If we decided to handle this at “pasting” time of code, the pasted text could also still be selected in the textarea so clicking the button would be enough.

Anything else to consider?

I would start much easier by adding a new ComposerMessagesFinder which would check for a large number of special characters mostly used in code and sending back to the user a JIT message teaching them how to properly format code.

Trying to automatically format code is going to end is

Yeah, my conclusion as well.
Just wanted to brainstorm the options.

Is this ComposerMessagesFinder at the time of pasting or posting?
Is this “JIT message” already a thing? Is this a private message or some UI element shown to the user?

Is this “JIT message” already a thing?

The concept already exists - try creating a brand new user on try.discourse.org, make a topic, and you’ll see it.

So you could have something that looks like this:

Is this ComposerMessagesFinder at the time of pasting or posting?

It’s whenever we save a draft.

That looks perfect. It doesn’t block the actual typing and editing, users can click it away and ignore it, there is actually enough space to really explain the task.
Only drawback is that it covers the preview where the actual difference the code formatting make is hidden. Any workaround?

Saving a draft also sounds like a reasonable moment to trigger this. 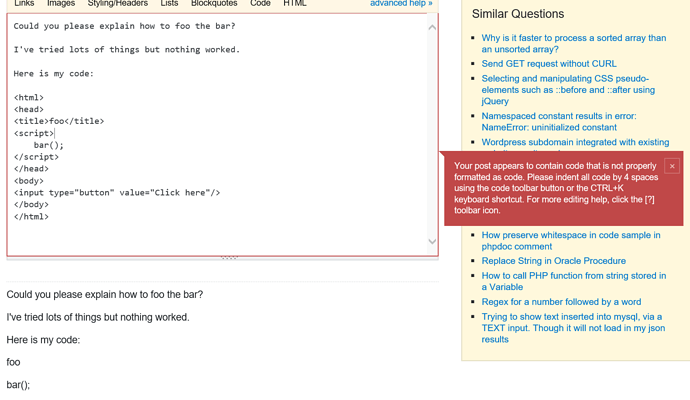