Notified of critical security updates to my Discourse installation I attempted to update my installation using the Web UI (https://forum.legably.com/admin/upgrade) as I have done in the past. There were two pieces of software that needed to be upgraded—Docker Manager and Discourse.

So, following the onscreen instructions, I SSH’d into the server, did a git pull and then ran sudo ./launcher rebuild app from the command line. The process finished but failed with a FAILED TO BOOTSTRAP error message.

Here is the output of two runs of sudo ./launcher rebuild app at different times:

The line numbers after each file are where the only ERRORs appear. Both appear to be database and role related (the difference between both ranges is because the second attempted a git pull from the discourse/base repository).

This appears to dovetail with the FAILED error message displayed at the bottom of each Launcher Rebuild attempt.

Note: These ERRORS are not the root problem. See “Solution” below.

Some people below have said that there is an issue with redis that is preventing a successful rebuild.

I ran `sudo ./discourse-doctor at various times during the day. Here is the output from two of the runs:

I ran sudo ./launcher cleanup to make sure I had enough disk space.

And I even checked my memory settings.

A reboot of the server did not solve the issue but I did notice something interesting after rebooting the server.

The Docker app container is running after a reboot.

When I stop the app container and go to the site I get a “Unable To Connect” error (which seems right since the container isn’t running).

But this puzzles me since I don’t have Nginx installed on this server.

I can see in the Rebuild output where the process is copying Nginx files from one location to another but I cannot find the corresponding directories or files, specifically nginx.conf on my server anywhere. Ubuntu, Docker, and Discourse are not my primary skills but I am assuming that these files are being copied “within” the Docker app container.

Thanks in advance; appreciate any additional help or direction with this issue, which seems to surface from time to time during Discourse upgrades.

UPDATE: It turns out my assumption regarding the Docker app container having its own internal filesystem is correct. You can create a snapshot of the container filesystem and explore this filesystem using bash.

In the app filesystem there is an nginx directory that contains a Discourse configuration file.

How about restart? From here

I had to change and reload the configuration a couple of times for troubleshooting Siteground mail service. There are multiple bits of advice on how to do it most quickly. Summarizing all of them leaves confusion. So, could you tell me the differences between the commands listed below in more detail? The information in install guide and posts in this forum are somehow inconsistent. It isn’t fully clear what e.g. is the difference between initializing and building a container. There should be…

This update requires the docker to be restarted.

So, yes your discourse is gonna be offline while you run ‘./launcher rebuild app’ in then command line.

All will be 100% once the rebuild is completed.

@IAmGav Docker appears to be running.

I will try some of the other launcher commands to see if I can get things up and running.

@IAmGav Ran ./discourse-doctor and it also confirmed that Docker container is running.

@rmccown Tried both start and restart without luck.

Still get this at the URL.

When all else fails - have you tried unplugging it and plugging back in?

Bring the instance up to latest: apt-get update and apt-get dist-upgrade

Then run the Discourse upgrade.

I just tried a reboot again (no Ubuntu 18.04.6 components to upgrade from earlier upgrade). 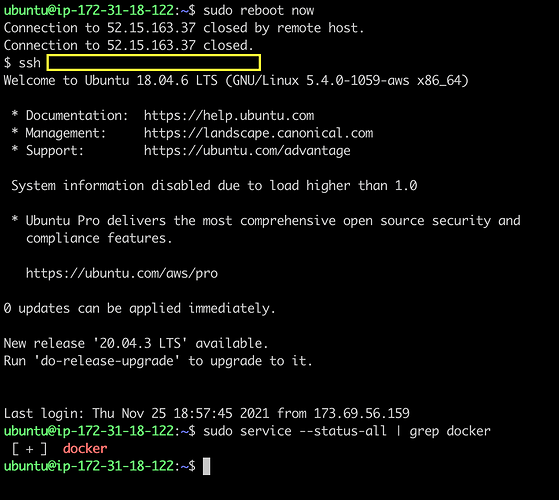 But thanks for the suggestion.

Also just found this from November 2020 - Upgrade ends with FAILED TO BOOTSTRAP.

That would be “tests-passed.” If you have not modified this line in your app.yaml file, then you are on the default release channel:

I am using the default release channel.

And I my db_shared_buffers value is not 0MB (found that issue here).

@IAmGav Here is a gist that contains the ./launcher rebuild app output - link

The only indication of ERROR is in the following group of lines (see below).

They seem to be related to database and role creation. Is there any way to bypass these actions? (which I think you would want to do during an upgrade since you working with a pre-existing instance)

Literally the exact same thing happened to me a while back, an update failed in the middle of a Web UI update; even the error messages after an attempted rebuild are pretty much the same and it’s still unresolved; only difference is I could update via the Web UI for a while, except a day or two ago, after not updating for two or so weeks, it now has the “You are running an old version of the Discourse image” notice, and now I can’t update at all.

Apparently it’s an issue with redis.

ssia. I’ve been unable to update, either in console or within Discourse. Have tried countless things, including disabling all plugins, to no avail. If anyone can deduce anything from the screencap of the console when I tried to rebuild, I’d be super grateful. [frefre]

Everyone - Updated my original post with information gathered throughout the day. Thanks everyone who has posted so far.

No. There is another error. Try to remove that plugin.

Following Michael’s advice in the above post, I commented out a plug-in in the app.yml file that was from an initial attempt at SSO authentication using the VK plug-in (we never went with this implementation but obviously forgot to remove the plug-in from the app.yml file).

After commenting out the line above I ran sudo ./launcher rebuild app again. After the rebuild the forum site appears to be up and running (testing now).

Thanks again for everyone who took the time to review my posts and comment. Your help was very much appreciated (what better way to spend a the Thanksgiving holiday here in US