Most of the engineers on my team have desktops. I.e., some of our meetings are without a computer. We’ve been using Discourse on my team for various technical discussions (I really like it and how much it has evolved, BTW). It would be nice to print out a thread from Discourse or to send as a PDF to someone outside the group. The way the print output is formatted precludes this. One page of text turns into four pages of oddly formatted whitespace and non-essential info. This screenshot is an example of Print to PDF (my coworker’s name under his avatar has been blacked out). The hard copy prints in the same way. 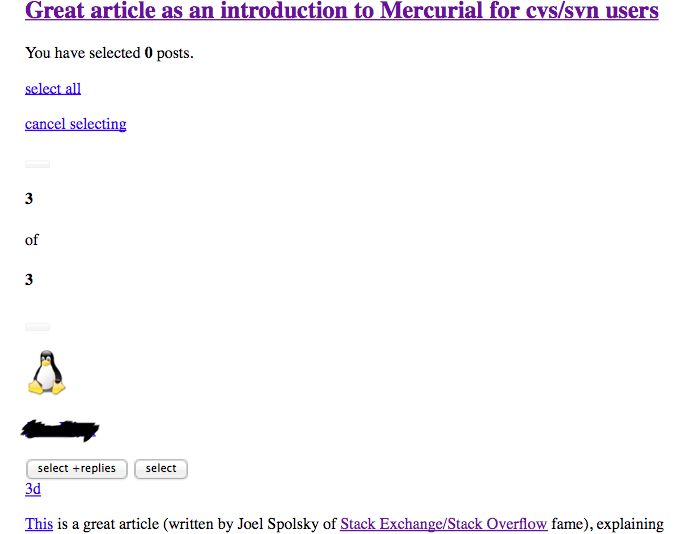 I think it would be fairly straight-forward to create a print stylesheet for Discourse, so it’s definitely feasible. Seems to be a bit of a fringe-case so I’d suspect it’d be pretty low on the priority list…

also, I believe it’d only print what’s currently loaded to view rather than all the posts in a topic (as it currently stands, not sure if there’s a way around that on the back-end)

Yeah that is another issue, if there are 3,000 replies the “print stylesheet” needs to load them all and print them.

That would better be accomplished with a “print view” I guess, no?
Maybe in a new window, with all the posts loaded and then automatically opening the print dialog via JavaScript.

I wonder if this is a fringe feature - would be interesting to do a poll to find out. I know that for my community that works in Africa it would be desirable for many to be able to save a PDF to read later offline.

There’s a bit of a hack solution to this problem posted elsewhere on the forum:

I suppose for most topics in a big forum, they would be semi-archived and having a web accelerator would solve any server load issues, if that’s what you meant. I’m probably dumbly stating the obvious and preaching the preacher here…

Anyway, is there any hope for this feature? I noticed a few other later similar topics which have equally negative feedback on implementing something like it. But I do think there are good uses for this.

Yeah I’ve read that as well. Just bumping the topic with the updated info I could find, dude. Hoping someone might have jumped in or might want to.

In fact, I could have answered this few hours after your post, but made ginbox remind me of doing it only today to make yet another bump.

This has been discussed before, yet as I understand it, it is not considered important. The issue is, there’s no convenient method to save a long topic to a PDF file. Personally, I can’t understand why this wouldn’t be considered important. I’m posting this here because I’m a member of the Keyboard Maestro forum (which obviously uses Discourse), and it was suggested there that someone (me) try to see if I could get some progress here on this forum. So here I am, bringing up a subject that seem…