How to Delete Uploaded Files?

That is right but we upload the js ourselves and have not given rights to anyone else. We disable the js upload as soon as we are done uploading some front-end js files.

Then make sure a hidden staff post links to the files. (There is a private staff category in every install.) And you should be fine.

I have just one new question in mind that is troubling me.

How does Discourse handles illegal hosting done by users using the PM system? What if a user uploads large files via PM and then links to it from an external source. Will cleanup task delete them or not?

Good question! Illegal activity in Messages is another reason admins need visibility into them, cc: @downey.

There is not a way at the moment to browse the largest file uploads but that would be a good thing to have eventually.

I am glad you agreed here. I will be more than pleased to have this option added in future updates

How does Discourse handles illegal hosting done by users using the PM system? What if a user uploads large files via PM and then links to it from an external source. Will cleanup task delete them or not?

“Illegal” is going to depend on the jurisdiction. For example, in the United States, the Online Copyright Infringement Liability Limitation Act provides safe harbor for service providers (such as someone running a Discourse site) against actions of their users. As long as the service provider responds to notice of infringing activity, and can produce good records of what that user did or did not do (emphasis hint for @codinghorror), and how they responded to that user and that user’s infringing content, then they are generally not liable for those actions.

In other words, it may not (or may, depending on where you are) be the job of the service provider to police and snoop on its users’ activities.

The Online Copyright Infringement Liability Limitation Act (OCILLA) is United States federal law that creates a conditional safe harbor for online service providers (OSP) (a group which includes internet service providers (ISP)) and other Internet intermediaries by shielding them for their own acts of direct copyright infringement (when they make unauthorized copies) as well as shielding them from potential secondary liability for the infringing acts of others. OCILLA was passed as a part of the ...

Sure, Nginx or Apache server logs would exist in all cases for all websites. So you are covered. This is real basic web stuff.

Whether the uploads are illegal or not, the site owner might not appreciate a user who signs up, achieves trust level 1 (necessary to message at all) and then posts 1 GB of files per day in PMs.

Still no such feature? How can I remove uploaded image?

Are you talking about an image that is used somewhere?

This are a good news, thank you. Can I delete 'em manually?

For the avoidance of doubt, when a post is edited and the only instance anywhere of an image/dropbox linked image is removed, is that image classed as not being used anywhere? Currently it is viewable when reviewing the edit history, something I wasn’t expecting.

Those are two different things.

An image has been uploaded and has a Upload record in the database.
A “dropbox linked image” is a link to an image that is “served” to the clients (browsers) by dropbox.

The automated cleanup is only about uploaded images. Not linked ones.

The behavior in point one runs counter to the post here, if you look through the first post edit history you can see a .gif. The underlying link does not function and the post doesn’t feature it anymore so I’m confused by the differences here and there.

Can’t tell since you ninja edited your post which did not create a new revision. The first version of this post only has “edited.png”.

Which makes me think that you linked the image and did not upload it.

there is no pencil - to test this:

Yes, because you edited your post too quickly. We have a grace period window of 300 seconds here in which if you make an edit, it won’t create a new version of the post.

The behavior in point one runs counter to the post here , if you look through the first post edit history you can see a .gif.

If you look at the raw, you see that the images are merely links to dropbox 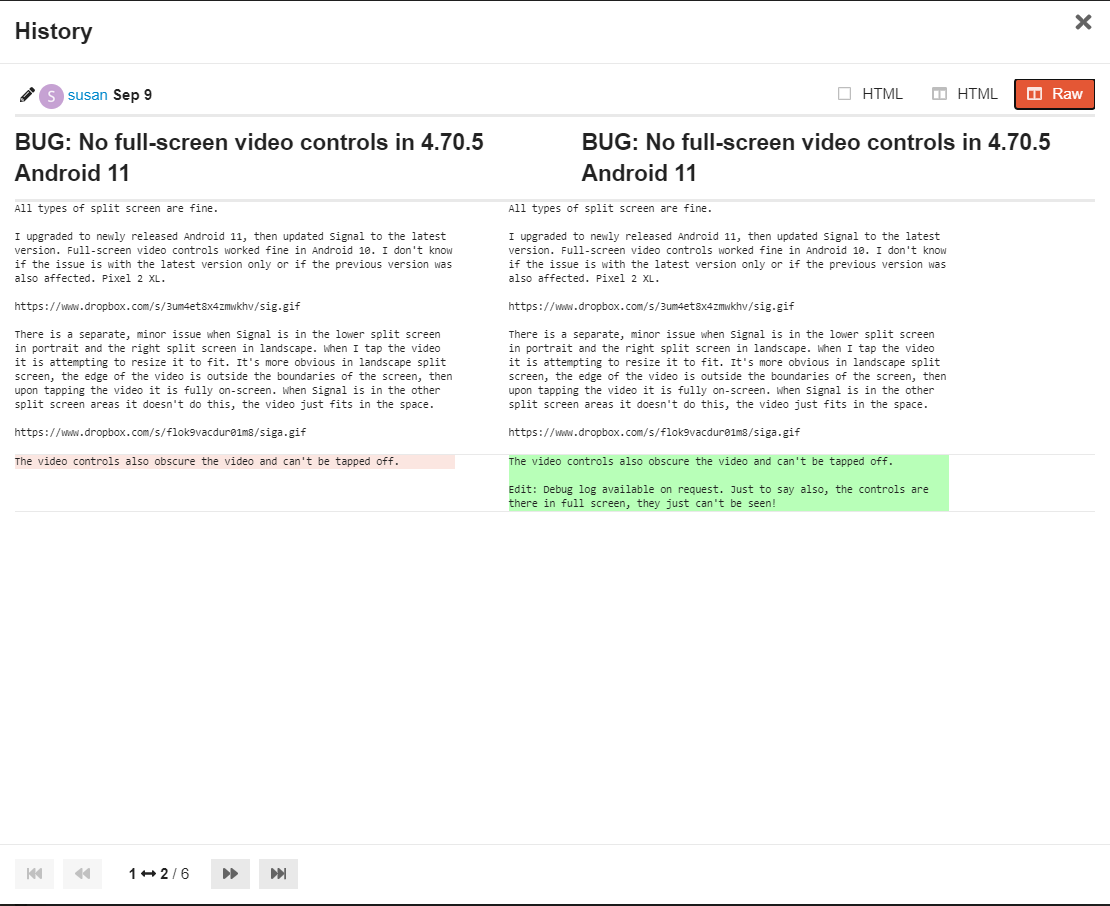 Those were not uploaded. Just linked.

Those were not uploaded. Just linked.

The underlying links have long been deleted - Shouldn’t that mean these .gif should seize appearing? Clicking “View Image” from the context menu takes me to a community.signalusers address, is that expected behavior?

Testing, I’ll edit this out in ~300 seconds and shortly after delete the link.

The link is deleted but the image persists in the edit history, perhaps it doesn’t have an Upload record as it isn’t removed by the automatic cleanup.

Clicking “View Image” from the context menu takes me to a community.signalusers address, is that expected behavior?

I suppose, looking about, that it is held locally is expected behavior when download_remote_images_to_local is enabled. I think that’s the relevant setting.

isn’t functioning for this type of upload, as demonstrated in my previous post. Correct me if I’m wrong.

The upload will be deleted if the site setting clean up uploads is enabled, after clean orphan uploads grace period hours.

Thanks for the quick response!

clean up uploads sounds like a general setting that would capture all images with an upload record, is that correct? Not just those present due to download_remote_images_to_local. If true, I should be able to find examples on the site of regular image uploads that aren’t being removed as a result of the automatic cleanup.

You mind me asking what the clean orphan uploads grace period hours is set to here so I can offer it as a solution. Or does it come with a default?

If they decide to enable that setting, will they need to do anything to apply it to past posts?

Edit
Just for the sake of being explicit, the thinking here is that this isn’t an issue but that a setting needs to be switched on. I just don’t want to go back and say “You need to enable this!” and they say “It is enabled!” I’ll look silly.

I also caught myself frantically looking for a place to browse uploads (familiar with it from MediaWiki) because I just know stuff gets double triple and quadruple uploaded, and sometimes I wonder where a file was that I uploaded once a while ago but maybe lost or deleted so I can link to it instead of re-uploading it yet again… I guess there is something to be said about a file browser…

I also had to somehow delete an uploaded file. We don’t have the cleanup task enabled as some files come from an import from a different forum software and have not yet been referenced in imported posts correctly. So I needed to find a manual way. The following works but is not pretty …