My upgrade to 2.7.0.Beta2 cannot be even started - click on the one-click upgrade link in the email announcing this upgrade

Hooray, a new version of Discourse is available!

Visit meta.discourse.org for news, discussion, and support for Discourse 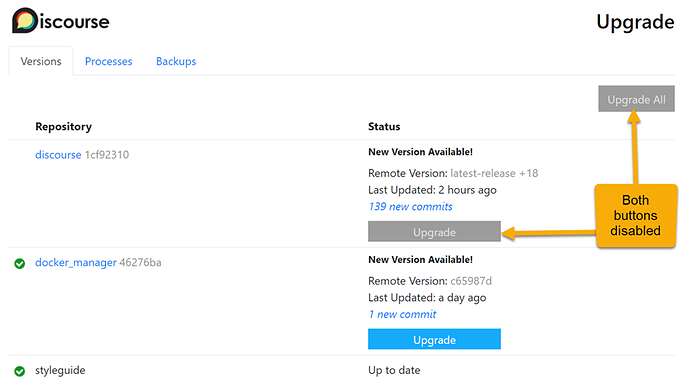 why is this happening? I am supposed to run the upgrade from the console logged in the Digital Ocean droplet hoting discourse?

You’ll need to upgrade from the command line. There is a new docker base image.

The announcement says that, but it’s not clear from the standard upgrade email.

I’ve just upgraded to 2.7.0.Beta2
You have to do this particular upgrade from the command line.

My apologies for this asynchronous discussion - I started my question and had to suddenly leave my office. To prevent losing my unfinished message, I saved it - and it gave you the opportunity to answer my question before I fully posted it

The DO console would work if you don’t use a terminal.

The buttons in the screenshot are initially disabled forcing you to upgrade Docker first.

An aside:You could have left your reply as it saves automatically as a draft.

The rebuild app script failed two times in the row, at the precise same place: 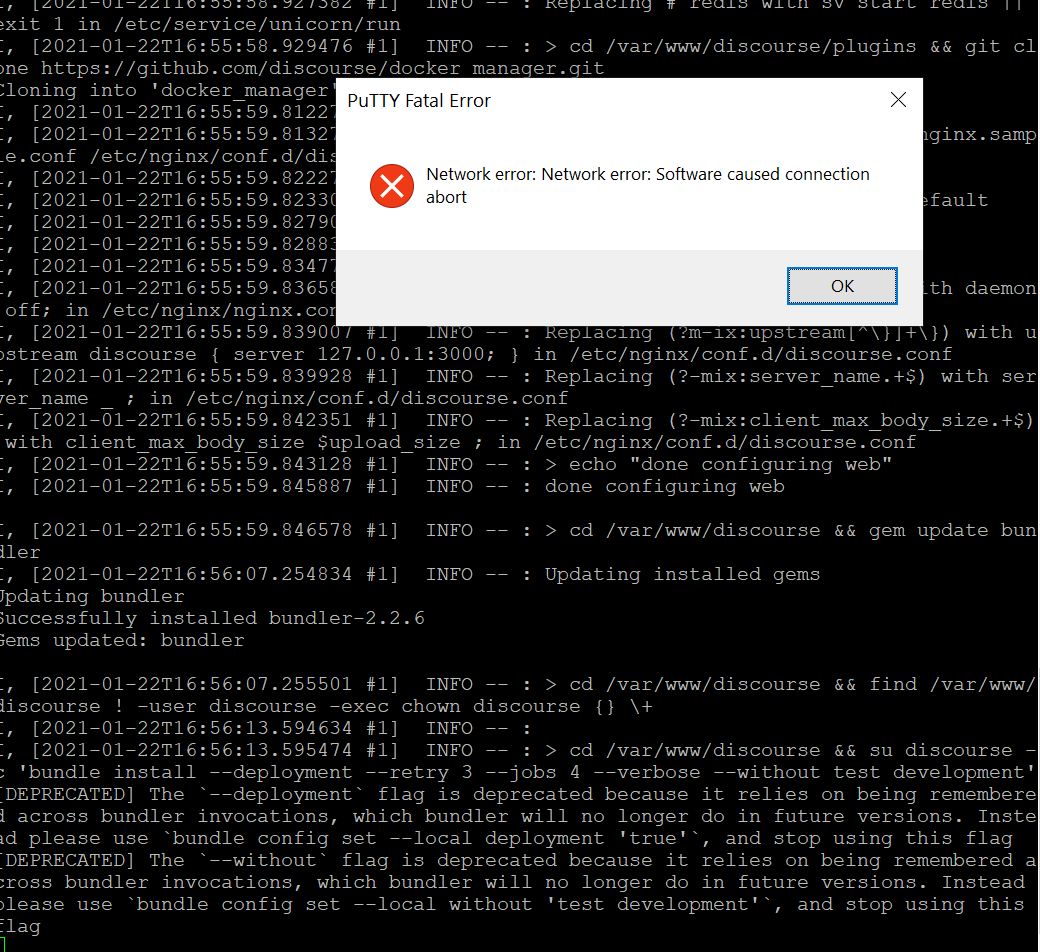 In my case rebuild stucked at plugin discourse-vk-auth. Currently my instance works without this plugin.

I’ve also run into trouble with that vk plugin in previous releases. My recommendation is to remove it, plus paste the error log to that plugin’s topic on the forum so it can be addressed.

Repository: https://github.com/discourse/discourse-vk-auth After installing the plugin you can go to vk.com and: Create a new application (or use existing one) at https://vk.com/apps?act=manage. (choose “Website” under Platform in the form for a new application.) Go to the application settings and note the app ID and Secure key. In your Discourse instance, go to Site Settings, filter by “VK” and enter the app ID and the Secure key. Check the “vk auth enabled” checkbox, and you’re done! You s…

Hard to say from the screenshot. Do you have enough disk space?

You have edited both your previous posts after I have interacted.

My apologies @geoff777 - without much thinking I reclassified your “like” comment (my intent was to keep the number of my posts small, thus lowering the chance of miscommunication)

I believe that I have enough space:

However, I suspect that my problem has to do with the Digital Ocean console - it times out very quickly , so it is possible that my update succeeded and I am just not aware of that. Will contact DO support and report my findings back here.

You can check on your forum’s dashboard that you have successfullu upgraded.
I hope it worked.

Your wish / hope @geoff777 did not help. I tried to login - and the discourse server was not responding.

I decided to run discourse-doctor from the DO console, launched from PuTTY tool (I am running on a Windows 10 machine), - and my console stopped at the same place.

Note this beginning of this run: - app not running!

Here is the complete log up to the point of failure, saved in my Github repository, to save the space here.

The fact that I repeated this upgrade several times and after each failure (reported to me as a “console network failure”) it is obvious that this upgrade kills the existing discourse instance.

Please advise. I am happy to pass you my certs in case you want to run this yourselves

Both times you got that PuTTY Fatal Error?

That seems like a putty problem, though I can’t imagine why.

Yes, @pfaffman I do get that same error. If the execution of the ./discourse-doctor causes some catastrophic failure is it not possible that this failure results with the PuTTY fatal error - at least for my own (remote) view of his failure?

It does not seem very likely, but I will create a support ticket for DO, hoping that they might have a better view of this problem.

I guess I world try the digital ocean console next (actually, I would use a terminal in Ubuntu, but that’s not what I’d recommend to you).

Since yesterday, I observed a lot of weird behavior. Before sharing them here, please do let me know if continuing this thread is useful for anyone (the alternative is that I am just stepping on my own d… and this is all a waste of everyone’s time). I found that:

Changing the root password and then using digital ocean’s console is a significant change that might be of interest to Discourse team to understand better. Should I continue digging and sharing my findings here, @pfaffman ?

Could you be running out of RAM and then having oom killer knock off some random processes such as sshd, thus disconnecting you and causing problems?

There should be something in dmesg output, /var/log/messages or the journalctl output if oom killer is running.

I doubt that running out of RAM is my problem, it’s rather me stubbornly using PuTTY console instead of the DO console.

So, I am going to switch to @pfaffman’s suggestion above, particularly since my discovery that PuTTY console gets disconnected even when I am using it for something completely different from Discourse management.

Ram could be it. Do you have swap?

Have you tried adjusting the keep alive setting, something like this?