Would you want this to be algorithmic like our /top page? Would it be topic based, or could good replies appear in a feed individually alongside popular topics?

I guess some sort of combination of last updated and popularity-based sorting would be good. As a regular reader, I find the recent/unread topics marked in a different colour useful to catch up. As a first time / occasional visitor I would like to see more engaging content on the front page (to motivate me to continue exploring). 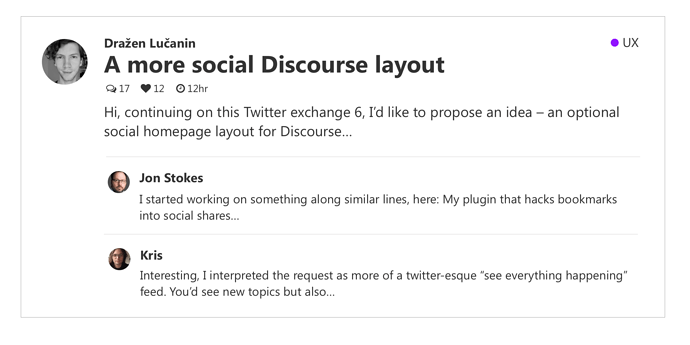 Yes, your layout mockup looks great – if every topic in the topic list had a few algorithmically selected replies underneath it and maybe images from these posts as well (because images can often be much more engaging than text alone) that would be great!

What features specifically would make a social layout more engaging? Do you want to see more content from each post in a feed of latest posts? Do you want a feed more like a blog showing full posts (or excerpts that are expandable inline)?

Once you open an actual topic to see all the posts, I think it can stay the way it is – where you can read the whole exchange. I think Discourse is already doing a good job there.

just bringing up the feed that BuddyPress uses once again. no algorithms, no shenanigans, just a user-friendly feed of what’s happening in the community…

This is also why “I want to follow users X, Y, and Z” is a huge red

A red flag for what, though? You have a blog, and people who want to know what you have to say follow it. So you’re doing exactly the “author feed + comments” paradigm that I’m expressing a preference for, yourself, but for whatever reasons you’ve decided not to host the feed (i.e. blog) on Discourse, and to only host the comments.

In fact, there is such a demand for some kind of “feed + comment” solution based on Discourse that an increasing number of sites are going to the trouble of wiring up a Ghost or WP blog to Discourse so that they can at least do the comments half, here. And of course every now and then somebody posts the obvious question in this forum, i.e. “Discourse is a great authoring and publishing solution, so what’s with making me wire it up to an external blog so that I can blog with it? Why doesn’t it have out-of-the-box support for just blogging directly on it?”

So I don’t have to defend the idea that “follow my feed and comment/like/share” would be a popular way to use Discourse, because to the extent that such a thing possible it’s already happening, and people are jumping through hoops to make it happen by mating Discourse to something you can actually host a feed with.

Are you advocating for Discourse to handle both cases?

I think it’s not at all a stretch for it to handle both cases. As for if I’m advocating for that, I guess I was, but at this point it’s clear to me that (absent a dedicated social plug-in) it’s not going to happen in any other form than it’s currently happening, i.e. somebody else (Ghost or WP) hosts the feed, and Discourse hosts the comments.

The team here seems dedicated to keeping Discourse squarely in the realm of a Google Groups and/or Disqus replacement, which is still awesome because both those things suck and should definitely be replaced by FOSS.

My take-home from this thread is that anyone who wants to see Discourse host a followable feed directly should focus their efforts on a plugin, so that’s what I plan to do. Right now, I’ve started hacking at my own, but I’m more than happy to ditch that and contribute to a more mature plugin that’s headed in that direction.

Creatives would be more engaged by something like this where images are used to engage as well. Food for thought

That’s right, I think some communities can be way more visual than others, which is why this depends heavily on the specific community.

Happy to help you with anything you get stuck on with your plugin. Just pm me.

Thanks! I will definitely abuse… er, take advantage of that

I have a long weekend or two ahead of me of going through the code for your existing plugins before I’m even ready to start pestering you, though.

Any wayvto have the option?

If you mean any way to have the option of pm’ing me about help with a plugin you’re building, sure happy to help.

I think it’s important to keep a healthy skepticism about ‘Discourse as social media’. Just because images increase click through rates, it doesn’t follow that it’s a good thing for healthy discussions.

In particular, I’ve found the following to kill true discourse on FB:

(I think I’ve got more for this list, but can’t think of them. I’ll update if I come up with them.)

What these things cause is people missing parts of the discussion without realizing it. I’ve personally carefully read every word of every comment in some discussions prior to responding, only to find out that I still accidentally missed substantial portions of the conversation. The “more” links within a single comment are particularly insidious, especially when you’ve already clicked one or more of them in the comment and you come to the end of a paragraph that seems like a conclusion.

These UX decisions are especially damaging in discussion where emotions are running high for whatever reason. When the comment with the apology doesn’t get displayed, or when it is accidentally left as a top-level comment instead of a response, thus dropping it out of view either by pushing it down the page or, even worse, not loading it at all because of issue #5 above.

The number of clicks required to see everything just goes up and up and up, and I’m sure it drives up the amount of “interaction,” but it also destroys discourse. I will say that some of these things—like the way that top level comments get their own thread—definitely have arguments that can be made for them for certain usability use cases. However, if you want to have serious discussion it is an outright nightmare.

I would urge the Discourse team to be very careful about what kinds of changes they make in the search for “social” features or “familiar” features (from social) or simply increased “interaction.”

I love Discourse precisely because it doesn’t have these things.

I would urge the Discourse team to be very careful about what kinds of changes they make in the search for “social” features or “familiar” features (from social) or simply increased “interaction.”

I love Discourse precisely because it doesn’t have these things.

I am with you

I see and understand the need to be “more visual” for certain communities that are already highly visual by nature, but as a central tenet of what we stand for? It would literally break us.

Yeah, awful! One advantage of having a smaller scale community where I’d argue such behaviour is unnecessary.

I see the thin line Discourse has to walk here. And I do agree this has to be carefully weighed and probably be the job of a plugin. However, I think there is another, more overarching challenge that Discourse should consider and weigh in as well. It’s that of an overall shift in the web that happened over the last many years, away from websites, blogs and message boards on to Facebook and other proprietary platforms, which have come to shape and form users’ expectations as to functionality and usability. These platforms have become the home for people, their view of the web and unfortunately more often than not a golden cage. I do not think that Discourse should ever try to copy that or become kind of an open source Facebook clone, don’t get me wrong. However, and that’s why I brought up Buddypress’ timeline view as an example, I don’t see anything wrong in offering an optional view to Discourse users (in addition to top, latest, unread, categories…), that depicts, without any algorithm and whatnot, a linear, reverse chronological, feed timeline of what is happening in that particular discourse community, and a more “familiar” entry point for some and also a useful indicator to visitors of the activity that is going on. Such a feed would not only list things like “XY posted in topic Z” or “Topic X was moved to category Z”, but also “X, Y and Z joined the forum today” or “A was rewarded Badge soundso for his excellent post in topic D” etc. So much activity types that such a feed could display that would trigger a lot of interaction and help build a community… I think for those of us struggling to get people back into message boards like Discourse, this would be a huge step up.

linear, reverse chronological, feed timeline of what is happening in that particular discourse community, and a more “familiar” entry point for some and also a useful indicator to visitors of the activity that is going on. Such a feed would not only list things like “XY posted in topic Z” or “Topic X was moved to category Z”, but also “X, Y and Z joined the forum today” or “A was rewarded Badge soundso for his excellent post in topic D” etc.

This feature has been available for years in vBulletin 5 and people hated it.

Interesting thread. Where I work we build all sorts of Communities and this type of social layout vs. traditional forum view comes up often. For me it really hinges on the type and volume of content. One Community we worked on (Telstra’s Aust. Community) took on the “social style” feed in place of a normal thread summary. The results have been received well by new users but not so by super users. Being able to personalise the feed helps make this type of layout shine too.

The results have been received well by new users but not so by super users.

Sounds about right to me, I am thinking of this primarily as a tool to onboard new users. The main challenge of today’s special interest communities is to lure people back out from the Zuckerberg prison…

Hi there,
are the efforts of feed layout still there?

@awesomerobot has built a theme for social lovers

I had a little fun with this one to showcase the flexibility of our theming system. This layout might look a bit familiar

The theme features a navigation sidebar, as well as a sidebar that showcases some of your user profile information. If a topic has an image, the topic list shows a preview. Topic excerpts will be displayed on all topics.

Preview it on the theme creator

How do I install a…

found an example by the way