A question on GPL licensing and the current WordPress debacle

I saw in @codinghorror’s post that this wants to be the WordPress of discussion forums, including adopting their business model. This was linked to a page of “how to build a business around WordPress”.

Unfortunately, WordPress (and Drupal) believe that all plugins and themes, including images and CSS fall under the GPL as well, since they use the WordPress API.

This makes it essentially impossible to make a living (legally) selling WordPress themes and plugins, and pretty much every “business model” in the linked post is against WordPress’s interpretation of the GPL.

I don’t believe that WordPress has sued anyone yet, but they have started banning prominent WordPress-based businesses from participating in their conferences.

This article has some more depth on the controversy.

Personally, I feel that WordPress is using the GPL to poison their community, rather than encourage businesses to be built around it, and I don’t want to invest a lot of energy in Discourse, or encourage others to do so, if they truly are following the WordPress school of business.

My question to the owners of Discourse: how do you specifically interpret the GPL when it comes to themes, plugins, and associated media? And could you clarify this, for all time, somewhere on the site, so that people can know where you stand on this?

I will have to dig up the links, but I am not sure this is an accurate characterization of the situation.

My understanding was that the recent dust-up was due to re-licensing in a way that wasn’t compatible with GPL. 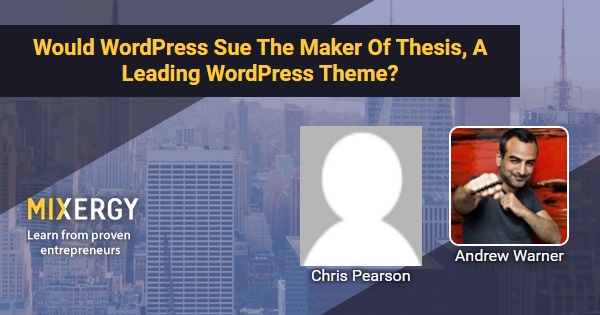 Would Wordpress Sue The Maker Of Thesis, A Leading Wordpress Theme? - with...

There was an argument brewing on Twitter today, so I invited the two guys at the center of it to talk openly here. Chris Pearson, as you might have heard in his recent Mixergy interview, is racking up sales of Thesis, the popular premium theme he...

All it really says is that you can do whatever you like but anything built on top of the GPL must be GPL itself. That’s the crux of it. There are over 10,000 GPL plug-ins. There are several thousand GPL themes. There are many GPL based theme businesses such as Blutheme, StudioPress, iThemes. You had 80 on the show. That’s how the WordPress system works.

Thesis has stated publicly that they believe in a different interpretation of the GPL. The GPL doesn’t apply to them. That WordPress’ license doesn’t apply and they don’t need to follow it. That’s obviously harmful to the WordPress community and I would love them to join and be GPL.

I agree that there is some nuance here to the issue of themes and plugins and we’ll certainly clarify there. But to say that “WordPress is using the GPL to poison their community” and “it is essentially impossible to make a living legally selling WordPress themes and plugins” are just not true.

@codinghorror You are correct – you can make a living off selling certain products and services related to WordPress, but it can be tricky territory.

I’m glad to hear that you will clarify your position on this.

FWIW, I was thinking specifically of the recent ThemeForest case, where an entire segment of the WordPress community (those who use ThemeForest) essentially got the ban-hammer for speaking at conferences. Even though Matt Mullenweg himself says that this does not violate the GPL.

Anyway, at the very least the WordPress Foundation’s attitude about the GPL is causing rifts in the community, which is a great opportunity for Discourse to learn from their behavior.

I guess what you are asking is, will Discourse ever allow closed source plugins? (where CSS, JS or whatever is close source), combined with allowing distributions of said plugins via the “Discourse Store”

I don’t know. This is a complicated question. As it stands the ecosystem is quite small, the easiest way for people to learn how to make plugins is actually look at plugin source code. By allowing closed here we would make it harder to get started.

That said, I understand the concerns here.

There is some legal grey area regarding what is considered a derivative work, but we feel strongly that plugins and themes are derivative work and thus inherit the GPL license. If you disagree, you might want to consider a non-GPL platform such as Serendipity (BSD license) or Habari (Apache license) instead.

I don’t know that I would actually agree with that. For one thing, we offer our enterprise customers a private instance so that they can build plugins that they don’t distribute, that belong to them.

That, I agree with completely.

This is absolutely correct. You have to distribute to trigger the GPL’s license requirements, so avoiding distributing it to anyone means you don’t have to open source.

The question is, if you, say, sell a company a proprietary plugin that they use on their own private instance, do they have to open source that plugin?

And that depends on your interpretation of the GPL.

I think the simplest way to avoid controversy is simply to have a public stance on it for Discourse, saying “We interpret the GPL to mean XYZ, so we {will,won’t} sue you if you sell plugins without open sourcing them.”

It’s fascinating really, watching the Wordpress empire clawing and scratching at the eyes of the very people who put them where they are. But that is human nature. At the start of any project, when we are all alone competing against the monsters of economy, we all want friends.

Lots and lots of friends. Lots and lots of friends happily telling their friends about you. Get enough of those and everyone is happy. And then the money rolls in, and with it the Paganis, the houses and the multimillion dollar divorce settlements. All of which needs even more money just to keep the wolves at bay.

It’s usually at about this point that the predictable nature of man usually comes into play. With lawyers, accountants and drug dealers to keep happy, suddenly all those friends became something else. They become an exploitable commodity. In short, they become prey.

All the Wordpress drama needs is David Attenborough narrating it really.

My understand of the GPL is the following:
Anything you build utilizing existing Discourse APIs is yours to do with. You can keep it closed source (granted it would be difficult to sell it and not provide the source to the client buying it), sell it, whatever.

If you need to alter the Discourse core code, that is where things get sticky. You are modifying code that is under the GPL, therefore all modifications you make should be made publicly and sent as a PR back to Discourse so they can include them in future releases (this benefits you as a plugin developer too – as you are making sure that Discourse by itself can support what you feel is necessary for good plugin development).

Your plugin can still remain closed source (you don’t need to make it publicly available, for free – you can definitely charge for it) even if it utilizes new API features you needed to add to Discourse which you plan to submit back to the Discourse project.

Hopefully that all made sense. But I believe that to be what the GPL means and should be interpreted as. I never followed any of the WordPress conversations, so I won’t get into that, but if they stood on a different side than mentioned above, I feel they may be wrongly interpreting the purpose of the GPL license (or I am).

If you need to alter the Discourse core code, that is where things get sticky. You are modifying code that is under the GPL, therefore all modifications you make should be made publicly and sent as a PR back to Discourse so they can include them in future releases

I think your interpretation here is incorrect; according to the GPLv3:

You may make, run and propagate covered works that you do not convey, without conditions so long as your license otherwise remains in force.

That is, as long as you don’t give someone your modified copy of Discourse, you have no obligation to share the code.

That is, as long as you don’t give someone your modified copy of Discourse, you have no obligation to share the code.

Yes, that is true. It only applies if you plan to distribute your changes to core.

And note that simply running a custom modified Discourse on your web server does not count as distributing the code.

(That is what AGPL and other oddball licenses try to deal with.)

Looks like Envato (hi @natman) does the following, a split license for themes:

Envato Market’s license for themes or plugins sold on the Envato Market sites covers all the components of these items, except for the specific components covered by the GPL. This is why it’s called a split license: because different license terms can cover individual components that make up a single item.

That would only cover themes, though, where there are a lot of non-code assets.

I really like that for CSS themes / images, especially if we want to create a market place.

The lowdown is here: http://codecanyon.net/licenses/terms/regular

What this means that if people start selling themes for Discourse other’s can not take the work and resell it.

The downside and devil in the details is that, how do you really copyright “CSS” and “HTML” just cause someone put a “position: fixed” somewhere does it mean nobody else is allowed to do that? Lawyers need to get involved to do anything here.