Read this topic about the completed feature

One of the features for v1.9 is for actions to automatically be taken when posts contain certain words. The goal is to have a better alternative to censoring words.

As a starting point, we need a UI to define and manage this set of words.

Some things to think about:

Here’s a rough mash-up of the Settings and Tags UI: 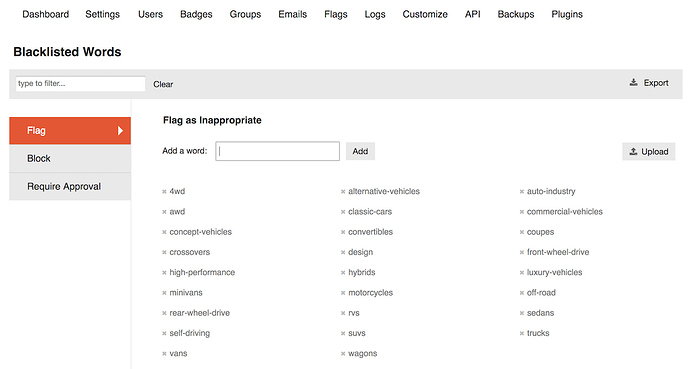 (Ignore the words list… it’s a screenshot of some of Car Talk’s tags.)

Another consideration: this mock-up makes it look like you can add the same word to all three actions. I don’t think it makes sense to allow all these actions to be taken for one word.

The table is mostly wasted space since there isn’t much to show, but lends itself well to infinite scrolling in case you’re in the mood to read offensive words.

Each item is made up of only two values: the word and the action that will be performed

Are you sure you can go straight from word to action? I think there needs to be some cumulative score across all words in a post and then actions are triggered based on thresholds.

Without wanting to make things too complicated, that score could possibly be integrated with the existing community flagging system (e.g. a certain score counts as one flag, a higher score counts as two flags etc)

No plans for score: if the word appears, the action is taken. If the word does not appear, the action is not taken. Additional complications aren’t in scope at this time, but maybe in the future once the new 1.9 feature is in place.

Has the notion been considered of wanting to watch for “good words” appearing, and and what might want to be done following their appearance?

What is your use case for such an unusual feature? Can you provide examples?

One example would be replies with the word “thank*” in them, as in “thanks!” or “thank you”.

IF user replies with “thank*” and hasn’t Liked the post they’re replying to, show a JITN:

In fact we are already doing it for the narrative bot: https://github.com/discourse/discourse/blob/master/plugins/discourse-narrative-bot/lib/discourse_narrative_bot/track_selector.rb#L241

I guess to your point we could “de-negative” this by calling it Action Words @neil, as in

When you see this word, take this action

I guess that’s a fair criticism.

What is your use case for such an unusual feature? Can you provide examples?

This was requested at elastic. People want to be notified whenever a particular product name appears in any post.

I’m very excited about this! Right now, we use a list of censored words to ban linking to some shady news sites which exist to promote online gambling. Then we also use censored patterns to block some swear words and harsh expressions. It’s very useful because we have popular live commentary threads for sports events in which people comment the course of action in real time. Sometimes your fingers are quicker than your mind when you are passionate about your team.

So is the plan to support just words or also regex patterns? Regexes would be extremely useful for my native language Finnish and other languages in which words are inflected.

6 posts were split to a new topic: Whitelisted words

Yeah I was thinking of simply “Watched Words” or something like that.

This was requested at elastic. People want to be notified whenever a particular product name appears in any post.

This is similar to another request that was being called “keyword alerts”. It’s similar, but is only useful as a per-user setting. The use case is a forum with buyers and sellers, and the sellers want to be notified when a post mentions the product they’re selling.

There’s no end of use cases for “do something when someone posts something”, so let’s prevent this topic from becoming a brainstorming session.

I think the problem is that my post didn’t explain what this feature is for. I thought “blacklisted words” was self-explanatory, but apparently not!

So is the plan to support just words or also regex patterns? Regexes would be extremely useful for my native language Finnish and other languages in which words are inflected.

Hmm, we should be able to include support for basic regexp patterns like “funki*”.

This is similar to another request that was being called “keyword alerts”. It’s similar, but is only useful as a per-user setting. The use case is a forum with buyers and sellers, and the sellers want to be notified when a post mentions the product they’re selling.

Sort of, I think that could be implemented a completely different way: issue a search periodically (ordered by date, desc) and any new search results cause the user to get notified. eBay does this for example with “saved searches”. I don’t think it needs to be implemented such that every single post is checked for a word at the time of posting by X different users, that feels like massive overkill to me.

I was thinking of simply “Watched Words” or something like that.

Not bad, some crossover with Watched Categories and Watched Topics so I think I prefer that too, it teaches about the concept of Watching.

People want to be notified whenever a particular product name appears in any post.

We could have a Watched Word action of “notify staff” but that is literally what flags are already for… right now the possible watched word actions should be:

I think you forgot the last one there @neil. I don’t know that I can come up with any other actions that make good sense here?

Yeah, censor should be in there too. I guess it should replace the existing site settings “censored words” and “censored pattern”.

Also, we should figure out exactly what “block” means. Obviously, the post will not be posted. But should the user be given feedback like “Your post contains a blocked word”. Should the user be blocked?

Just block the individual posting, is what I was thinking. We may want to be coy about what the block is for, something like “contains words that aren’t allowed”.

Automatic Actions based on Words found in posts announcements

New for 1.9 is the ability to take some actions based on watched words found in a post. Block the post at the time it is submitted. User sees a message saying they’ve used a word that’s not allowed. Flag the post as inappropriate, but allow it to be submitted. Censor the words, which replaces the censored_words site setting being removed by this feature. Require Approval of the post, hiding it until staff reviews it. add a Link to a word Replace words in posts with other words Tag the po…