Another way to upload backups to Dropbox (command line)

Dropbox has an advantage - it syncs a new backup as soon as it appears in the system. The deal is to put new backup to your local Dropbox folder (with a cron script provided).

Before you proceed you have to know:

maximum backups (3) - this manages how many files will retain in Dropbox
backup frequency (1) - everyday
backup time of day (3:30 UTC) - default
backup gzip compression level (6) - choose between compress speed (1) or less size (9), but in case of VPS your host provider my restart your server in case of long high CPU utilization

Second connect your server to Dropbox with shell commands (important: because I run the service as root, I am logged as root at this step - so you may try your regular user):

When you first use Dropbox at your server you will see a uniq weblink. You need to copy and paste it to web browser and follow the instructions. After that a directory Dropbox will be created in your home folder. Official Dropbox recommends to download Python script to manage your daemon. I don’t use it.

Commands to manage the daemon: 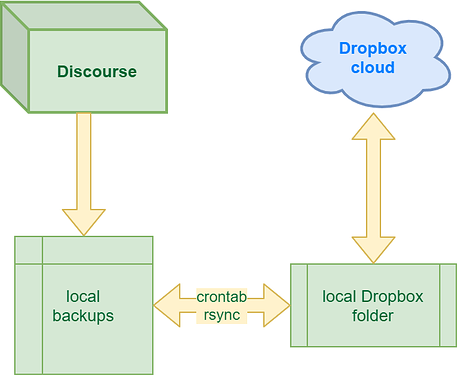 Discourse provides backup files and it manages their number and the frequency.
Crontab rsync task copies new backup to local Dropbox folder.
After that Dropbox uploads new file to the cloud.
When next night Discourse removes old backup file, rsync removes it from Dropbox as well.

Fourth prepare folder for reverse-sync (unsync unnecessary folders)
For example, your Dropbox folder has subfolders and a file:

You need to exclude all except backups. Actually the command adds items to exclude list:

If you suddenly added backups to exclude list, you can return it to synchronization, removing the item from the list:

Current status of certain backup can be checked by the command:

There is a timewindow between 3AM UTC and my local 8AM - it should be enough to backup completion before it begin synchronizing with Dropbox.

P.S.
I did not check this configuration half a year or even more. Now I realized that the command dropbox status has returned:

The syncronization still works, therefore I will not upgrade it. Last time symlink support was lost.