I came across an interesting concept at Arguman where every topic is presented in the form of argument maps. 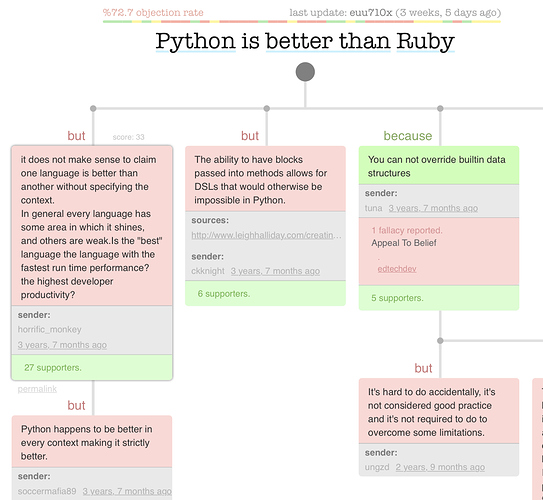 It could be interesting to have this as part of an expanded topic summary where different points of view are laid out based on the number of likes and replies. A bit of manual tagging as a sort of wiki could help define them.

That may work if there are not a lot of people tossing their two cents into the argument. However, if you get a large number of “contributors” to the argument, then it could get very messy in a hurry. You end up with a lot of “because” and even more “buts”… especially if someone comes into the “argument” late. I think that would be a manual tagging nightmare.

I see in the left column that one “but” had 27 supporters. What would happen if those 27 supporters all had their own “buts?”

I think you would need to have some sort of limits to reduce clutter. Maybe something like only the arguments with the highest supporters get listed.

only the arguments with the highest supporters get listed.

But how would a new user’s post become part of the argument map… after getting supporters (likes)?
I kind of remember something along these lines decades ago, but for the life of me I can’t remember what the subject matter was. I think I’m having a “senior moment.”