Can't install Discourse with only 10 GB disk, run out of space

You can select Ubuntu 14.04 with docker as your operating system. 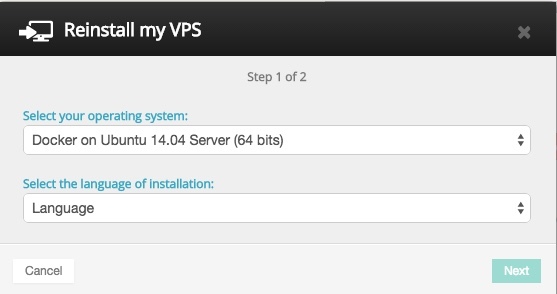 Yea, I just did some checking and see that docker is now supported with the latest openvz kernels.

Not sure what your issue is. Sorry.

@pl3bs: I tried your Dockerless installation script on the OVH-host but I got problems with it as well.
I filed this bug in your repo: https://github.com/pl3bs/dontdockmebro/issues/6

There’s nothing wrong with the script, it was tested by another user just two days prior.

It seems you’ve skipped this part.

I really had the wrong domain set up but I changed it the HOSTNAME in /var/www/discourse/config/discourse.conf rebooted but still get the same error.

Crazy thought: can you please paste the output from

About the only idea I have left is that for some reason the block size of your filesystem is abnormally large. That would cause everything to appear to take up much more space…

OK, rather than trying to guess what the actual filesystem type is, can you please paste the contents of your /etc/fstab?

Hm. OK. Apparently OpenVZ makes this sort of thing more opaque than we might like, since that tells me nothing about /dev/ploop*

How about cat /proc/mounts?

When I ran ./launcher cleanup, more than 10GB were freed up.

Clearly there’s a leak somewhere. I’d be curious how much disk space Docker takes up on other folks’ similar configurations. Right now, I have

Usage of devicemapper is not recommended. I don’t think that has changed in the last few months.

If you are using device mapper, you are in a world of pain and suffering. Strongly not recommended. We block install on device mapper for a reason.

Well, I never did anything intentional or specific to end up with devicemapper. Never saw a warning, let alone been blocked from installing.

I installed Discourse around June 2015 (I think - is there a way to tell specifically?), so maybe devicemapper was the default back then for Docker on Linode kernels, after Docker dropped the aufs requirement? I’m running Ubuntu 14.04.3 LTS (GNU/Linux 4.4.0-x86_64-linode63 x86_64) and have upgraded the Linode to KVM from Xen.

What exactly does this “world of pain” entail? Is it worth restoring a Discourse backup to an instance running on aufs?

The short version: It will work fine until it suddenly corrupts the file system; and then demons fly out of your nose, circle back behind you and strangulate you. Only one of these is an overstatement

Here are a few memorable quotes from the world of pain:

We had some very nasty support issues that were incredibly hard to troubleshoot.

What is the best docker storage backend to use on a VPS?

Never, ever use device mapper. That is a one way ticket to corruption town, sooner or later. It is buggy as hell and has been for a year despite Red Hat saying “it works now” over and over.

What is the best docker storage backend to use on a VPS?

Should there be some guidance in the 30-minute installation guide about aufs? Right now it assumes DigitalOcean, but folks may want to install on other hosts, for whatever reason.

I am pretty sure launcher warns about non aufs these days.

I am pretty sure launcher warns about non aufs these days.

Not a peep actually. I’ve just installed on a Ubuntu 14.04 LTS Linode. Here’s the full log.

What is docker info returning?

So odd … any idea why that test Can't install Discourse with only 10 GB disk, run out of space is not running, try putting some echo commands in launcher to see if its even hitting it?