1. Where to find words? (how to delete, etc.)
2. Russian characters not working 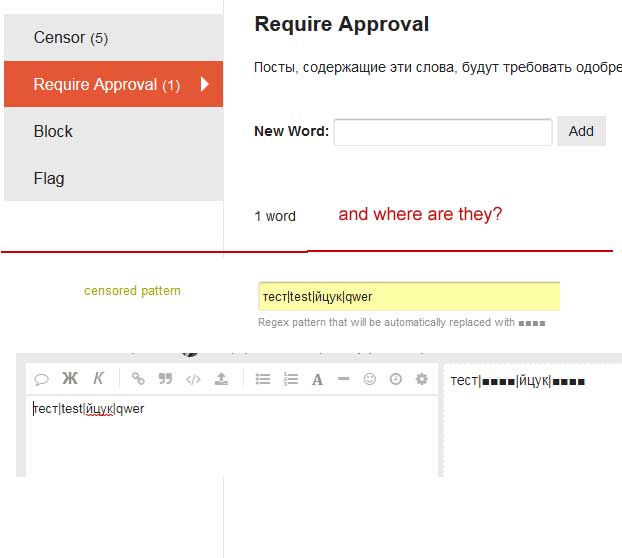 This does not look like a regression, I think it never worked:

This regex does not work with Cyrillic .

That’s a tough one.

I don’t think this can be solved with a regex.

OMG I have been trying to find this setting for ages. Almost went ahead to create a dumb topic here just to ask where it is.

Turns out that it is tucked under “Logs”… probably the last place I’d expect to look for it!

Probably should file it under regular “Settings”.

@sam is correct in that \b doesn’t seem to match any Unicode, or any non-ASCII word breaks.

\w seems to be defined narrowly as [A-Za-z0-9_], probably just to parse source-code type texts. And \b is simply (\w\W|\W\w). So using \b has the net effect of turning any character outside simple ASCII letters/digits into white-space letters. There doesn’t seem to be an easy way out to deal with this.

An option to deal with this is to omit the \b wrapping altogether – a good idea because this will not work on any language outside English, which is quite restrictive if you ask. Not the entire world speaks English…

Put a warning on the regexp filter setting that uses must manually wrap their regexp’s in \b if they are dealing with strict English.

This has multiple benefits:

So that word boundaries are automatically applied only to things that look like words.

Perhaps with the help of regular expressions it will not be possible to rewrite this. (
I tried it, but it’s a terrible option (the introduction of cycles.) It works, but this option is very bad.

This issue is now solved by:

Beware, your Watched Words will now be raw regular expressions and you’ll need to put in your own word break \b where necessary.

This topic was automatically closed after 40 hours. New replies are no longer allowed.