Cleaner handling of multiple consecutive replies by the same user?

I’m quite positive I’ve posted about this myself, but I can’t find it! :o

Have you thought of merging the posts into one, instead of giving a warning? If not, and if you don’t buy into it, that’s something I’d try to implement… I’m not sure there’s any reason for several posts not merged, display-wise.

But it’s not simply merging together. I’d still leave each response separated when they are displayed. That’s the main point.

Inversely, I’d split a multi-reply made in 1 post to conform with this behavior.

How exactly do you propose to merge posts when there are 3 posts, all explicit replies to a different post?

It is a very hairy problem.

I’d suppose merging wouldn’t even be the hairiest problem…

But if they’re replies to a different post, that’s the simple case. Just add collapsed quotes and make it similar to any traditional manual multi reply we see today.

And what do you choose to quote from the post?

Either nothing or the first words. The point still is to link to the original post like it would be in the several posts - just reducing the unnecessary space between them.

Now that you brought that up, I thought about an issue… There wouldn’t be an individual reply button like there already is! Hmm…

This is several posts today: 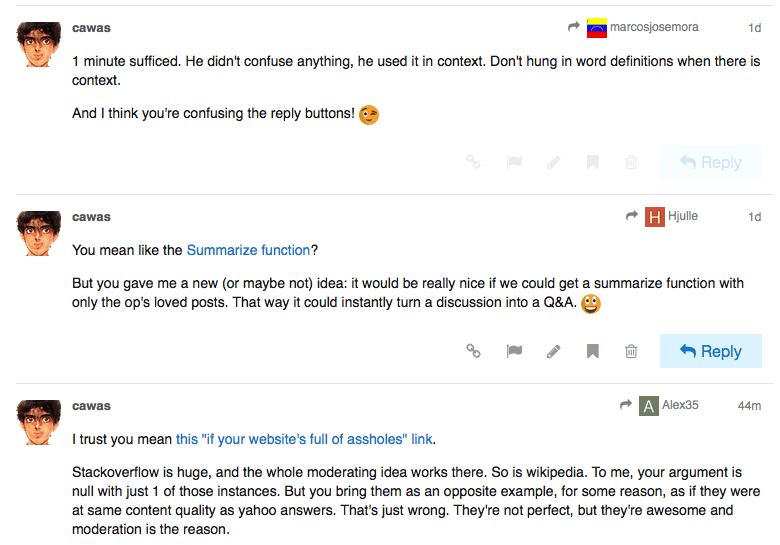 This is a suggestion, which could also be the goal for splitting a single post with multi replies in it.

Well, at least something cleaner like this. The reply buttons should be different (maybe just no background) and the other one besides it should be more like the quote today… But this is just to give the picture. 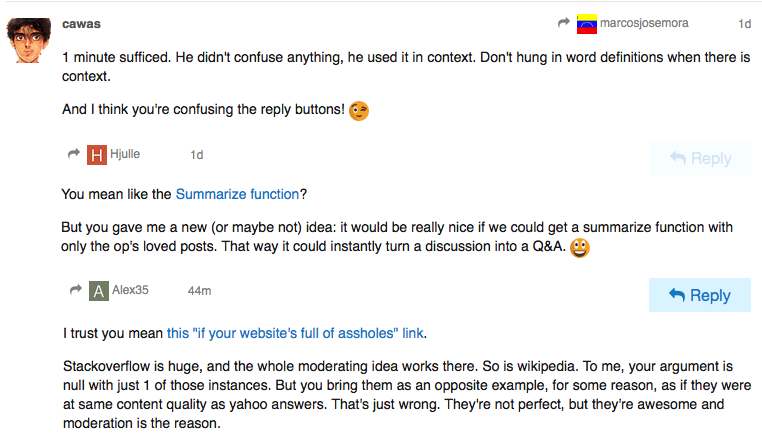 Maybe there should also be a like and link buttons there, nothing else.

In any case, I’m glad to know this is something you’re considering and whenever I get the time I’ll try and implement it just for the heck of it… If you guys don’t do it first!

Personally, I’d just insert an @mention in the text if there are no quotes when merging several. As in:

This would be something to be splitted as well!

Maybe but you lose reference to which post, specifically, they were replying to in the multi-reply merge. Probably better to insert a string with a link to the post before.

Might be easier to have a mode where more than one sequential reply to the topic by the same author is simply disallowed.

Personally I like this option. It simplifies the problem considerably by turning it into just a different way of displaying the subsequent posts, rather than worrying about actually merging the content of 2, 3, 4, + posts into a single post.

I find it incredibly confusing and noisy. It also has the severe problem of encouraging a behavior we don’t want – “oh look, when I post a few times in a row I get a special optimized layout just for me!”

a behavior we don’t want

That could be highly dependent on the community in question, or even the topic. (I’m thinking a particular topic could be a journal with entries once a day and minimal responses, if any at all.) This also wouldn’t be in lieu of the warning, it could be in addition.

I find it incredibly confusing and noisy

I find it less confusing and noisy than 3 posts in a row from the same person. It’s also just a mock-up. I don’t think it’s perfect by any means, nor should that be expected.

Seems like you would want a different topic layout in that “journal” case, like a chat layout. That’s another topic entirely.

3 posts by the same person in a row should look bad. We don’t want that behavior. Making it look good is the opposite of the intended effect.

What was originally discussed is a forced merge, or even preventing people from posting more than 1 time in a row in the same topic.

3 posts by the same person in a row should look bad. We don’t want that behavior

The whole point is improving the threading. I myself post 3 in a row for that reason. You, at other hand, would have done it all in 1 post (as I do it sometimes as well), which makes threading for each of the posts you’ve replied quite bad.

From that point of view, I can’t see why posting several times, specially knowing it will look better, is a bad thing. Why we incentivize making threading bad and we don’t want several posts behavior if it won’t be disruptive?

What was originally discussed

I’m sad this discussion have ended without a resolution (from my point of view).

I stumbled upon this while discussing about discourse elsewhere and now, thinking about it again, there are at least two aspects that we haven’t brought, even if they’re obvious…

For the second one, I think if the sub-topic threading works good enough, there’s no need to worry.

All in all, maybe all I would do would be removing the avatar and name when there are multiple consecutive posts, and trying to separate a single post into such multiple ones when they’re multiple replies, to keep a better sub-topic thread consistency. Maybe even offer a switch button to “merge” and “separate”.

I’m definitely not interested in making any kind of fork, or even programming this but again, if any you @admins could “assign” such a task to me I’d make my time (a long time) to try and implement it. That’s how much I think this should be done!

Well these are your posts per the screenshot! If you believe so strongly in it, delete the consecutive replies, and edit the first reply to fold in the sequential replies you made, using quote replies or @name mentions…

Well these are your posts per the screenshot! If you believe so strongly in it, delete the consecutive replies, and edit the first reply to fold in the sequential replies you made, using quote replies or @name mentions…

If your edit to the title plus this post reflect what you understood from the last time, I take it I couldn’t make myself clear at all.

And I’m well aware of the warning for third consecutive reply.

I think I’ll just abandon this since I got no clue how to better explain this right now.

Well it’s hard to understand when someone says “look at me, I am aware of this problem, that is why I am proudly a part of it!” and in particular I think the so-called fixes proposed are often worse than the problem. Repeated sequential post metadata is annoying and noisy – I agree with you there – but merging people’s posts together without their explicit consent is real nasty business.

I’m not so sure I am aware of “the problem”. Do you recall exactly why the
warning on multiple consecutive posts were created at first place?

Thanks to @nbianca we now have two settings for this:

We also have a merge posts tool for staff.