Continuing the discussion from Real-time updates:

The forum educates in a pop-up when posting:

> It’s easier for everyone to read topics that have fewer in-depth replies versus lots of small, individual replies.

But as it is, we are encouraging people to post individual replies instead of edits when adding incremental updates to their posts. Unless you have a strict question and answer type of forum, chances are you have these kinds of topics, i.e. sports forums have match day topics, apple forums have wwdc keynote following topics etc.

How about combining subsequent replies (from the same poster) into one with some server side magic or styling? Sound a bit weird but it could help keep things tidy.

The just-in-time behavior cue you are referring to occurs when users post several replies in sequence. It is only a reminder and happens once per topic. It’s also configurable, of course, and can be turned off or tweaked.

Why do we do this? Allow me to illustrate: 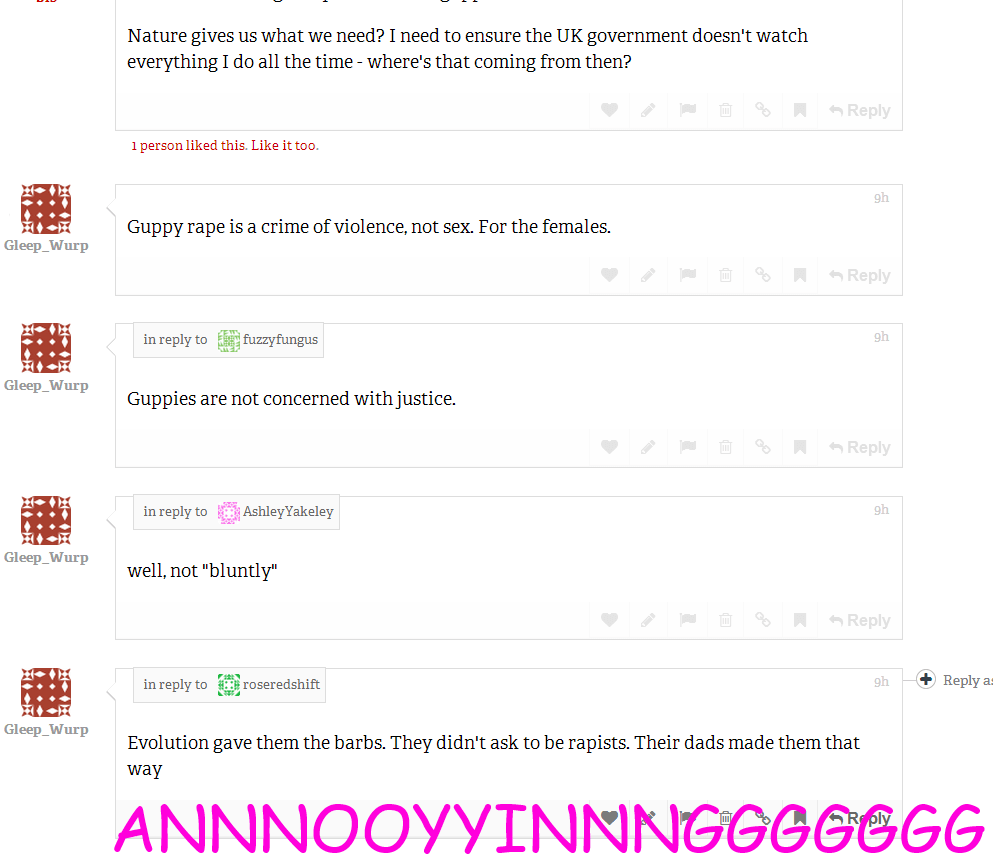 Why is this annoying? It’s annoying because:

So, we show a reminder when this happens: 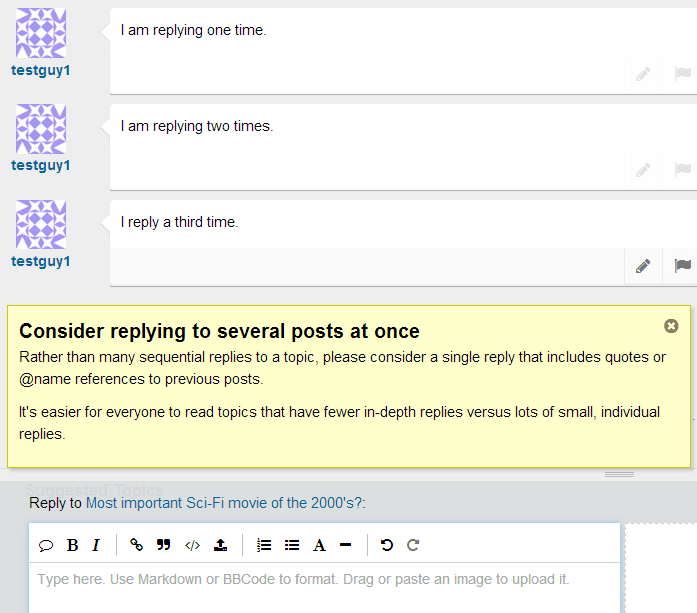 Now, @stienman did note that some forums:

We could explore some of these as options in Discourse but #1 makes me rather nervous as it is a big magical system change to submitted content.

I agree, it’s annoying to follow a topic with multiple short replies in sequence.

It’s especially bad when they respond to the same person in multiple individual replies, though that is somewhat less common, it’s the most clearly objectionable

But there are legitimate use cases for this. Say I wanted to post something like a live blog from the new ipad launch in a discourse forum. Should I write one post and edit that 100 times to add content or add 100 replies in sequence? The first option would be much easier to read after the event, but anyone following live would have to be constantly refreshing the page to see the edits. So I would naturally opt the latter strategy and add endless replies that get updated in my followers screens in real time.

As for posters just being lazy or ignorant of edit button and posting sequent replies, there are two options:

Maybe we could tweak the ui to show sequental posts from the same author with less metadata overhead? Just separate the posts content with thin horizontal lines for example. Completely disallowing sequental posts seems too radical to me.

a quick ui mockup of combining posts in ui:

If sequential replies are very short they are better to be completely disallowed because such a message stream converts forum to chat. If they are not short they could be forcibly combined because it simplifies reading and there are use cases where it is really convenient, for example, when someone replies by email.

And also there is support kind of topics like Q&A where even non-sequential messages can be combined to increase content readability for later readers.

This mockup still has the same problem I was telling @cawas about – how do you indicate each of those three responses was an individual reply to a particular user?

Yeah, if the post does a proper quote or mentions a @username then sure it’s easier, but if they don’t?

I’m all for excess metadata suppression, I just haven’t seen a way to do it yet that doesn’t break stuff.

Yay, I was invited to the old and resurrected conversation!

Do you recall exactly why the warning on multiple consecutive posts were created at first place?

I’m glad for this. From what I read here maybe you’d love to see a good way to deal with this issue. Or maybe you’re just trying to dig an idea out of it.

I didn’t realize the whole point for the warning was trying to prevent spam. Basically this is the issue or “the problem” I wasn’t aware of. It looks like you’re trying to apply the just in time theory hoping you can reduce the number of such bad behaviors which, I suppose, you know it does happen a lot from some data you’ve collected.

To me the problem was just about keeping the good flow of each separated conversation, which already happens if we reply in different posts. Nothing to do with writing bad content.

But, come to better think of it, it probably doesn’t matter.

I still think this doesn’t change a tiny bit my suggestion. The image I had in my head was not limited to the mockups I’ve done in the other topic. But while I think I understood better where you were coming from and I were trying again to explain it in a different way, as descriptive and explicit as I could, I decided to drop it (I left the point where I dropped under the edits, if you want to take a peek).

The current system already deals very well with all that stuff. It’s a bit messy to follow each single message chain from many multiple sequential replies but it’s doable. Maybe my problem was I can easily think of a scenario where it’s so complicated anyone would give up on following it. But in reality I haven’t seen such a scenario and maybe it doesn’t exist in practice.

This is now complete, at least as a staff tool. Thanks @adrapereira!

For users that insist on posting multiple sequential replies, especially short ones, it would be nice to have a “merge posts” option appear when you use the admin wrench to begin selecting posts in a topic, and then select a few posts by the same user in sequence: [image] This does make it somewhat ambiguous what happens when 3 different replies “directed” at 3 different users are combined. Not sure exactly how to handle that, but for now I would just remove any explicit replies as part of th…

Leaving this open, as the staff wrench post merging tool is great, but not quite the same feature discussed here.