What happens to logos?
Some won’t look good with a dark background.
Will we need to have two?

This is going to be a theme, not a new default. We just want to make sure we properly support dark themes and the best way to do that is to actually use one

Okay I’ve deployed a theme. It is quite ugly so I hope we can fix it quickly.

I hope that includes changing the red text; it’s near-impossible to read some of it on this not-quite-black background

Non sequitur coming at you all. Really enjoying the dark theme.

I feel more at home now.

hate the dark theme,how do i switch back

Love the direction this is going. The blue on grey around the edit box. (topic being replied to, cancel link. and reply button) are a bit hard on my eyes though.

Really want to be able to spread the darkness

Edit: Checked the contrast ratio between the grey and the blue. 2.43:1 - if I’m not misunderstanding the standard this fails WCAG and section 508 guidelines. WCAG specifies normal sized text it should be at least 4.5:1 and for large text at least 3:1, otherwise users with even mild to moderate visual impairments are likely to struggle.

Please keep accessibility in mind here as you are working through the bugs. It may seem like a nitpick to many designers, but its a big deal to a lot of viewers.

Nobody here is really a fan of dark background but it is a valid choice and we want to make sure it works… only reliable way to do that is eat our own dog food for a bit. Per user styles is not in scope.

I don’t get the appeal of dark color schemes.

I don’t get the appeal of dark color schemes.

I totally get the appeal … for Vim, for the web it feels like a depressing train wreck.

That said, different strokes for different folks. We enabled it here to ensure we work reasonably in a dark theme. We will move back to a light theme once done.

Only way to resolve issues with a dark theme is to live with it.

I suspect that it will mostly be driven by “brand identity” and a fair few misguided attempts at consistency between a Discourse community and a larger site that community complements. 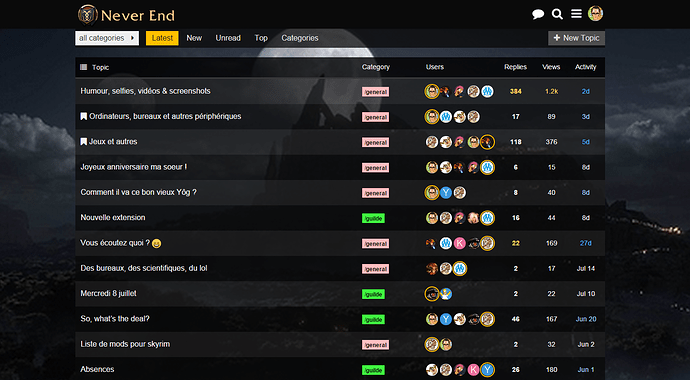 I got rid of the gray header, it felt really odd and no other dark sites we host use it.

I think it look fine but we could possibly add a border below the header now.

Staff and wiki posts are pretty hard on the eyes. Dunno if that goes under subtle aesthetics. 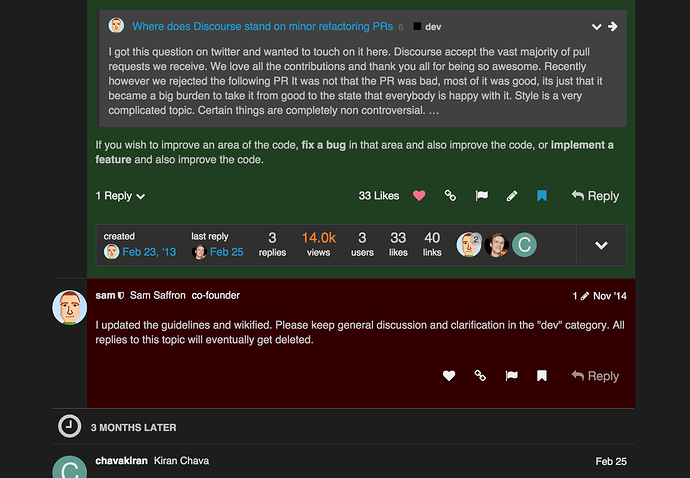 On that note, I thought Discourse wasn’t gonna do translucency any longer, but it appears this ever so slightly still in action, but only on the Reply button it seems. The icons now come off as the more emphasised item as long as you’re not mousing over the post.

@codinghorror
After this theme is official i think it will be implemented on all discourses sites(updates),
but the user can choose the theme ? black or white ? just asking .