New in beta3 is the review media unless trust level site setting. Sites can now be configured such that all topics/posts containing embedded media must be reviewed by staff prior to being posted.

Differentiate between group and individual mentions

Previously, individual mentions and group mentions did not have a visual distinction. Both used the @ symbol. The mention type could be seen on mouseover, but this doesn’t work on touch devices, and is not readily apparent.

We use the Users icon, the name of the user who created the mention, as well the group that was mentioned.

For sites with Secure Media Uploads, uploads are redacted from emails.

Allow admins to delete SSO records in the UI

Sometimes SSO records on Discourse become out of sync with the authentication provider. Most commonly, this is due to users changing emails in one system but not the other. To provide sites with better tooling for resolving SSO conflicts, admins can now delete a user’s SSO record, which causes the user to be matched via email on the next login, instead of on the SSO external_id.

User topic timers allowed staff users to set timers to remind them to go back to a topic. With the introduction of bookmark reminders back in 2.5.0.beta3, all users can now set reminders.

Following up the improved dark mode support in beta2, sites can now set color palettes to be user selectable, just like themes. This means sites no longer need to configure 2 themes to offer 2 colors - they can instead install 1 theme and add user selectable color palettes.

More data in the user export

Users have long been able to download all the topics and posts they’ve created on the site via their preferences. This download now includes additional user data, including badges, visits, bookmarks, and more.

Sites can now customize the base font via the wizard and site settings. 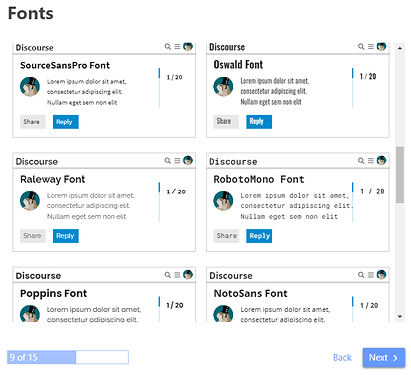 This beta includes 6 security fixes for issues reported by our community and HackerOne.