I’ve got a user who just messaged me because he was banned. Here’s what the logs page says about him: (bottom entry)

Nothing shows up in screened emails or screened ips for why this user might be banned. What cases are there where a reason wouldn’t show up in one of these places?

From my searching it looks like the only one is that they copy and pasted text from another document to insert into a post too quickly.

Check that users private messages and it should be clear. This would only affect a new user.

The only PMs the new user has are the default welcome message and then a generic account blocked message?

That’s what the member is calling a “ban”

You should be able to go to his Admin Users page and un-block him.

Ban or block, I want to know why the system decided to do this for sure and without digging further than I have. It should be available on the “Staff actions” page.

My guess is because they are a New user (i.e. they didn’t spend any time looking around) and they went straight to posting. And because they copy-pasted instead of spending the three seconds or more typing, they failed the rate limit test.

I’m with @TimeDoctor here. There shouldn’t be a need to “guess” why the system blocked a user, new or not. If the system initiates a block, there needs to be details in the logs so staff knows what is going on.

Yes, a type of “you failed New member Rate Limiting” message would be better than a generic “You’ve been blocked” for the rare times it happens to a legit member.

While custom PMs for auto-blocking would be nice, I am talking (and I believe @TimeDoctor is too) about the staff logs, not the PM.

FWIW, I had this happen on my site this week, and for a longtime email-only user (a trusted staff colleague of mine, in fact) who was surprised and a bit annoyed to get the automated message below from me in response to a post. I wrote in another topic about email only users needing an automatic pathway to full citizenship.

In the case of this automated email, it says “multiple community members flagged this post before it was hidden” which in this case I know is not true. She was just still a TL0 new user (because she rarely logs in) and hit a linking threshold that triggered the automatic flagging.

So some more granularity in the reason given for the flagging would be helpful. Both for the user trying to post and for moderators trying to help users caught in this predicament. I am not sure at all how best to do this (maybe templates with a dedicated spot to insert the reason?) and it’s not been a big issue yet on my site - we very rarely get flagged posts. 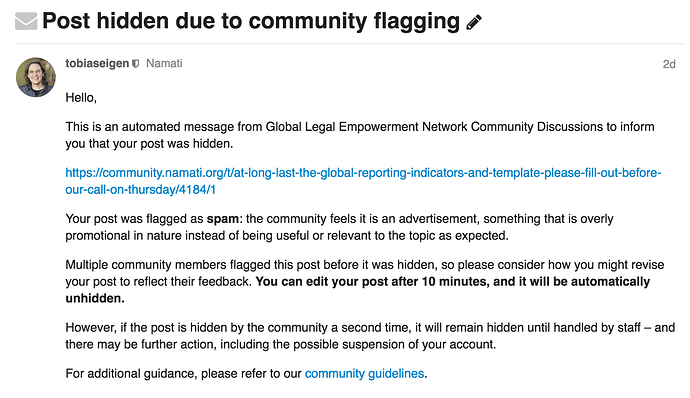 Your issue is completely unrelated to this topic – the blocked pm says blocked.

It also says “by a staff member” which feels a bit incorrect (though system does have a reputation to maintain after all), but otherwise looks good to me.

This has come up before…

I have noticed that the system automatically blocks some new users. These appear to be normal users who don’t have the same IP as anyone else and in most cases haven’t posted a single thing. Why are these users blocked?

Looking back in time, it seems this has come up many time before. Interestingly, it seems @zogstrip put in a fix 2 months ago when I reported it (totally forgot I reported this

So…the other day (well, 14 days ago, but I forgot…) we noticed that a user on Stonehearth was blocked, and we can’t figure out why! For the Discourse devs, here is the PM where we discussed the randomly blocked user: http://discourse.stonehearth.net/t/did-anyone-block-a-user-lately/20556?u=jomaxro Both moderators (myself and @8bitcrab) and admins (@sdee and @brad) on the site checked the logs, and we confirmed on Slack that no-one initiated the block manually. No posts appeared for approval …

User blocked for no apparent reason

I checked and what @codinghorror described is what happened. User was automatically blocked because they were identified as a fast typer (ie. they copied and pasted something).

It was unfortunately not logged, so I fixed it

I don’t think his commit added a message, see (there is no message parameter)
https://github.com/discourse/discourse/blob/f15d463eb8a73edd180ec0d6f3eff15187eded51/lib/new_post_manager.rb#L85-L87

This crops up from time to time on our instance, too. The log shows a new user as being blocked, but there is nothing to indicate why.

There was one this morning when I logged in. I can see that he has three private topics, so presumably the System has PM’d him, but as a moderator, I have no access to those messages. I did what I usually do in the absence of other information and unblocked him. Does the system then send him another message to let him know his account has been unblocked? I ask because I’m not aware of any of the new members I’ve unblocked returning to post, so I’m concerned that they’re giving up and going elsewhere.

Does the system then send him another message to let him know his account has been unblocked?

Now that all text can be edited:

I also came on here a month or so ago to find out why my users had been blocked. Now I know it’s usually because of copy/pasting so I don’t bother checking the logs (so it’s possible this is implemented and I haven’t noticed it) but block reasoning would be really helpful.

I made the copy quoted above the actual correct copy from the server.en.yml file because it was super

ing me that it was the old, bad copy being pasted in as images…