Hi all - I’m new to Discourse, and just figuring things out. We run a large computer science education nonprofit, and are looking to move our online teacher discussions from Google Groups to Discourse.

I’ve successfully embedded other cloud-based tools into topics already, by:

However, I’ve been unable to embed our own cloud-based IDE. The IFRAME shows up blank. A quick trip to the developer tools shows that the http request went out, but was denied with error 307 - Internal Redirect (see attached screenshot). My theory is that this is happening because our domain points to an AppEngine instance, so a redirect is happening behind the scenes and Discourse is blocking it for security reasons. Evidence to support this theory: embedding the AppEngine instance itself works, but using the domain doesn’t.

Since we periodically update the instance, it’s very important that the normal URL works. I’ve searched through other topics on the forum to no avail. Anyone got any advice for a n00b? 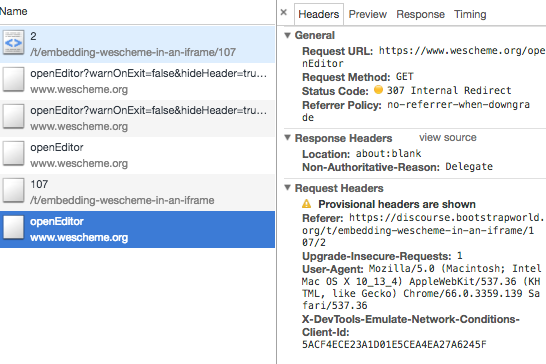 This doesn’t look like a Discourse problem. If you fix the URL you’re embedding to not cause a 307, everything will probably work a lot better. Interestingly, the “307 Internal Redirect” is reportedly issued when Chrome is asked to load a HTTP resource for a domain for which it has an HSTS policy active. However, in your case the headers suggest that it’s already a HTTPS URL, so presumably there’s also other cases where Chrome does the same thing. Either way, though, this isn’t a problem with Discourse, it’s a browser/embedded site problem.

I agree that the URL is problematic, but the problem only happens with discourse. The URL by itself works perfectly in a browser tab, and I’ve been able to embed it using IFRAMEs elsewhere. If it works everywhere else, something tells me there’s a discourse-specific interaction effect happening.

I could use a little help in tracking down the issue. Surely some discourse user has tried to embed an AppEngine app at some point, no?

That link is different to the one in the screenshot you provided earlier. Perhaps that’s related to the problem?

Good catch! However, it’s the same domain - with the same result.

Problem solved! It turns out that some of the resources being loaded by the IFRAME were being loaded via HTTP. The no-referrer-when-downgrade error was the hint that something fishy was going on.

Now we can embed our IDE inside Discourse posts - which will be a HUGE boon to teachers who have questions about the programming activities in the curriculum. Thanks so much to everyone who chimed in to help! I’ve attached a screenshot of a working demo. 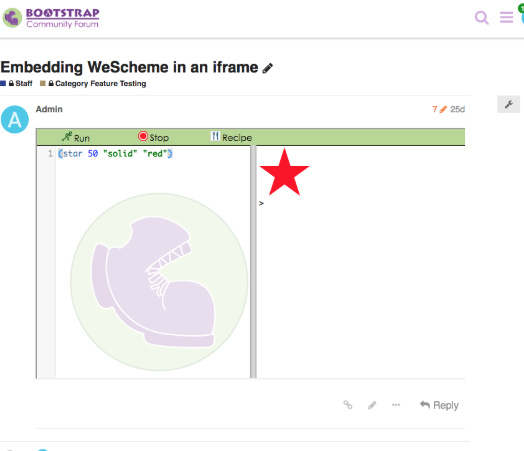 Is this still useful in 2019? Or an updated version is there please help this newbie. I have started laravel development services try to reach out.

This should still work. Have you encountered any problems while attempting to do so?