I found out how to invite users t public events – but how about inviting all users in a group? Is this possible/planned/deliberately impossible?

if not there are private events for that matter: 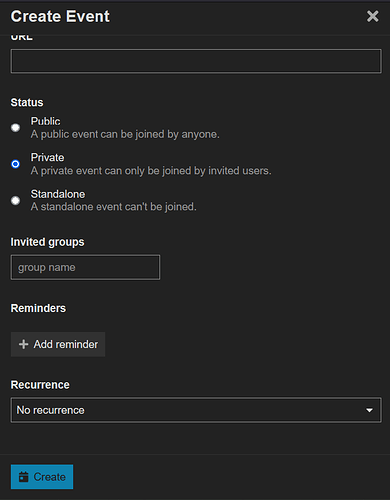 It doesn’t seem that we can select the automatic groups though (trust_level_0 for instance, which would make a private event virtually a public one)

That’s what I thought. But the modal actually only let’s me select single users, not groups.

groups have to be visible (their members don’t seem to have to be though, weird) by the user making the event (who doesn’t need to be a member of those groups)

That doesn’t help. I am global admin and can see and select all the groups everywhere else, but the invite modal still only allows me to select single users. 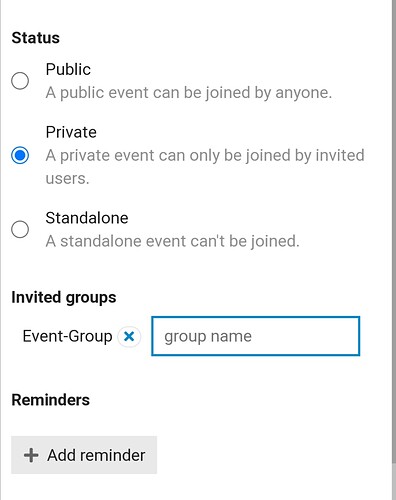 Could you give us a step-by-step of what buttons you’re pressing to create these invites? There’s a chance we’re talking about separate things.

yep, I concur, latest and latest, it does work.
As Jammy suggest maybe we are not talking about the same thing, or there is some kind of “interference” with another plugin or component ¯\_ (ツ)_/¯

Could you give us a step-by-step of what buttons you’re pressing to create these invites? There’s a chance we’re talking about

I am talking about “mass invite”. Which ist not an invite after all, but a poorly named features. I am talking about directly adding people to the event from the drop-down menu after it has already been created.

Hmmm. I am also having trouble getting the bulk invite to work as expected.

I’ll split this off into a new #support topic while we explore what’s going on, and maybe take a few steps back and see if we can come up with an alternative in the short term.

If you could run-through what you’re trying to achieve, I can mirror it on my test site and see if I can suggest any other options.

Hmmm. I am also having trouble getting the bulk invite to work as expected.

Well, it does work for single users. I am pretty sure mass adding groups is simply not implemented.

There are two issues here from what I conclude:

I will provide more details later when I get home and can make proper (and English) screenshots.