I need to be sure what I am experiencing is normal.

SSL certificate expired, forcing a rebuild of app which failed.

What I had to do after failed upgrade:

Now I am stuck trying to boot discourse rails rails s -b 0.0.0.0 for testing. 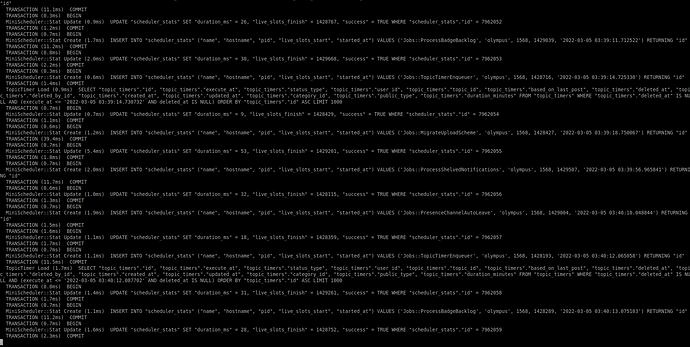 The command line has been producing transaction output like this for over 24hrs.

I am wondering how I can improve the speed of this process? And also is there any way to check how much progress it has made/how many jobs are left?

I am trying to produce a backup locally and then upload it online.

The command line has been producing transaction output like this for over 24hrs.

You are not stuck, that command you ran starts a webserver and keeps running it until you manually quit it.

I guess this isn’t a standard install?

If recommend making a backup and moving to that setup.

I ended up accomplishing what I needed with discourse containerized on a web server. Thank you.

Problems I have since encountered:

I am currently stalled trying to properly configure app.yml for plugins:

Plugins never install. I noticed LOAD_PLUGINS=0 in the output despite trying to redefine it to LOAD_PLUGINS=1.

Did you do the standard install?

Did you do a

After adding the plugins?

Did you do the standard install?

Did you do a

After adding the plugins?

Absolutely followed the official installation instructions for the web server. I can enter the app and clone repositories into the plugins folder but cannot get app.yml to pull the plugins using ./launcher rebuild app.

Rather than the checkout of v2.8.1 maybe just use the stable branch?

Considering I have a topic dedicated to my upgrade and, likewise, both of your attention, I have a question about tabular data.

I have tables in posts that source static images on the web (that will never change in the foreseeable future:

How can I tell discourse to accept specific heights and widths of images inside a table? Previous versions of Discourse were capable of such.

I believe that was with a different markdown engine, and that’s no longer a legal way to do it. I think you’ll need to convert it to markdown only, which might be a bit tricky. Maybe Rafael has an idea.

Looks like it works already? Don’t forget the quotes.

For the sake of testing and clarification, in addition to quotes you’re saying the images now also require both a height and a width attribute to effectively change the size? See the examples below for confusion about that: 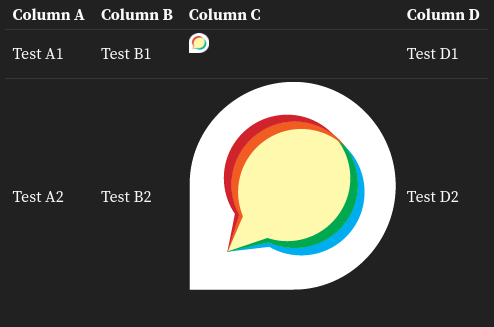 Also, I’ve noticed after rake posts:rebake that larger images are no longer clickable and can’t be opened in the lightbox gallery which are in quite a few posts. Suggestions?