This is a question to admins of discourse sites, and developers of discourse:
I have a long-time user on my forum who has a tendency to attract and/or enter into heated debates. 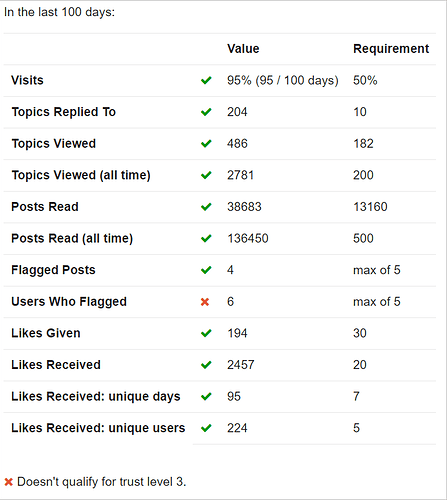 Untill now I have been dealing with individual incidents and flags on a case-by-case basis.
The user does not always explictly break the forum rules in big ways, so usually that results in minor reprimands (“agree with flag, hide post”).

I also get complaints from people who think he (and others) intentionally “flags opponents out of spite”.

I have always hoped or assumed that in the long run, the discourse system would sort of magically constrain the user based on “bad reputation over time”.
Looking back, I’m not so sure I understand the flagging system fully, or that I understand how it is supposed to be used.

I was wondering What do you think of the numbers that I have shared?
Do you think they are normal? excessive? do they say anything at all?

How would you deal with this user, and how do you think the Discourse flagging system is supposed to handle users like this one.

I think this is where having community rules with manually-applied penalties and an ironclad moderation policy comes into play. Good communities can indeed be marvelously self-adjusting, but as you rightly point out, bad behavior can come on a spectrum. I don’t see the total number of posts for this person, but 148 posts that have been flagged & deleted is, IMO, absolutely insanely high. That’s “kick this person out and never let them back in ever” high.

Forum members can at times be like a cross between a rules-lawyer at AD&D and a toddler—they can have a stubbornly maniacal focus on pushing boundaries, and the astounding ability to completely tarpit any attempt at a corrective discussion. The way to deal with them—just like you deal with a rules-lawyer at the table or a two-year old—is to follow up your conversations with consistent, firm action, and to make sure you have a written policy in place to back that action. And never exceptions.

Consider drafting a brief community rules document, or modifying the one already in place, to include something like the following set of points:

Then, monitor the user’s behavior. If they’re maliciously flagging other users whose behavior is not actually breaking any rules, or doing anything else fishy, you drop the hammer.

This isn’t a case of being unfair or overbearing—this is a case where, as you say, community moderation hasn’t quite been able to curb bad behavior. This is why you have mods and admins!

Thanks. I think I agree. like I said, personally have not been too involved with the management of the actual community. (my admins have)

thanks for your perspective

I don’t see the total number of posts for this person, but 148 posts that have been flagged & deleted is, IMO, absolutely insanely high

6000 posts over the course of 2 years, to put the numbers into context

It’s unclear to me if this person has been directly contacted yet. I find that contacting users in a non-confrontational manner to just inform them about their unwanted behaviour can be very effective. No need to imply repercussions or anything like that.

Just point at some examples of bad content/behaviour by the user, and politely explain The Right Way to do it.