Get notified of new topics, but not posts

We use our forum for client requests and then one of the team will pick it up. Before it’s picked up it will be discussed. Not everyone in the team is interested in every request. So they don’t need to know about the replies. But if they are interested, they should respond quickly, don’t want to keep the client waiting.

Given the original reason for adding the more frequent digest options, I think showing TL0 posts in digests should be supported somehow. But for most people who are only getting digests weekly, TL0 posts should still be excluded. Maybe TL0 posts should only be shown if you’ve opted in to multiple digests per day, and chosen to see TL0 posts.

I’m getting digests every 30 minutes from meta right now, and in practice I don’t actually get one every 30 minutes. While I’m on the site, I won’t get a digest because there’s nothing new for me. During the night, there are periods of 3 hours sometimes where a digest isn’t sent. I like the feel of it so far, but if it included all TL0 topics it might lose its curated feel. A per-user option to “include topics from new users in digests” might solve it.

Good idea… let’s live with this a week longer and then decide on some tweaks.

I don’t see digest option in Udacity’s Discourse instance. Is this live yet?

My end goal is as follows.

I want to receive email notification for every new post in a topic I replied to or have marked to watch. I suppose this can be already done.

This is how it works for topics you created it have marked to watch. But if you just reply in a topic, you will automatically be tracking it, not watching it.

I added the option to open the floodgates. Topics from new users (trust level 0) can now be included in digests.

This is a user preference, and there’s a site setting to make it the default behaviour for new users. I would not recommend enabling it for everyone as a default!

I think the better solution here is to let people opt into digests that are sent every 4 hours, or whatever.

I just noticed what seems to be an issue in how the content of digests are formed, which affects this discussion. It seems that only the topics created after the last_emailed_at time are included in a digest, while last_emailed_at is updated when any email is sent to the user.

E.g. I’m observing the following behavior. The user is watching a certain topic and receives notifications via email. Let’s say his digest interval is 1 day and he received a previous digest yesterday at 7pm. A new topic is created at 9am the next day. Then, at 3pm the user receives a reply notification on the other topic he is watching. Now, when the 7pm — the time of the next digest — comes, the topic created at 9am is excluded from the digest because it is created before the user’s last_emailed_at time, which in this scenario happens to be 3 pm — the time of the last topic notification email.

So, it appears that the user can’t rely on the digest for timely notification about new topics.

would like to get a mail when a new topic is made in a category.

I am warming up to this original request. @eviltrout can you take it? 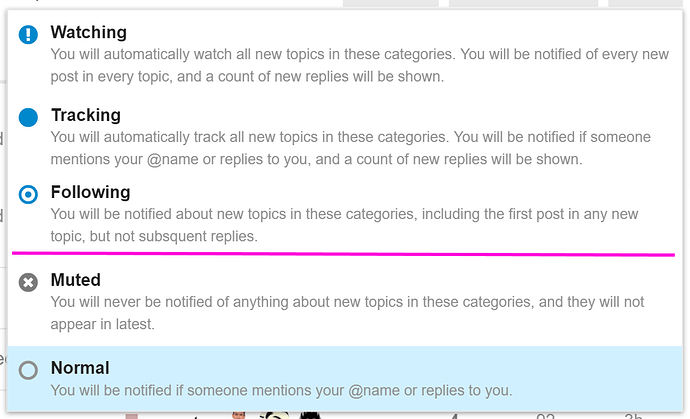 Can this new notification level not be exclusive of Tracking?

If I am understanding this correctly, if I choose to follow a category, I’ll get a notification (and thus an email) for every new topic, but will not receive further emails, nor will I see unread counts on the topic. I would very much like to receive an email for the first post only, while still seeing an unread count when I visit the site, without needing to track each topic after I get the first email.

No, it cannot. Adding Boolean complexity is unwelcome.

The idea is that you haven’t decided if you care about everything in this category, so when you get notified on creation of each topic, at that point you personally decide on a topic by topic basis which you care about. Either by replying which is an automatic track, or an explicit click or tap on the topic’s notification controls.

OK. Then can a one-click option to track or watch the topic be added to the email footer? At the moment, it seems you can visit a topic, stop receiving notifications, and change preferences via the footer, but not start tracking/watching a topic “you are mentioned in”.

I suggest you reply to any topic you are uber interested in, which can be done via email and is an automatic track.

Hmm, let me share my use-case here. Currently, I track all categories on my site, so I can see when I log in what is new/unread. There are certain categories I’d like to get notified when there is a new topic, but not necessarily see every post. However, even though I am notified of a new topic, I still want all topics to have unread counts when I visit the site, without needed to come up with a reasonable reply to each new topic.

I think this is a great addition - being able to track new topics in a category. However, I believe the UI terminology here is starting to get really confusing.

It’s the fact that all three words have a very similar meaning is the reason why it is unclear and easy to get mixed up between them.

Simplify the UI terminology, to use one of these words - I would suggest ‘Following’ as this is the most commonly used of the three in other web apps. A couple of rough mockups of how this could be implemented are below.

If user is not currently following category:

If user is following category: 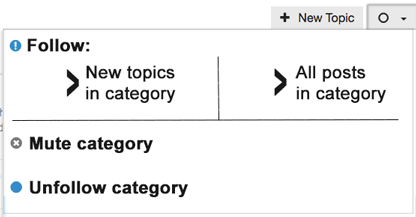 A similar theme could be used for tracking topics. For example:

If user is not following topic:

If user is following topic: 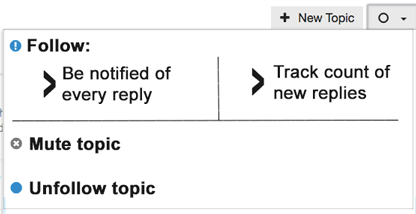 In addition to the above, I believe the tracking button should be changed to be more obvious as a way to ‘follow’ a topic / category. If a new user sees

, how are they meant to know they can click on it to change the tracking status? Why not simply change it to ‘Follow’ - which then pops up menus akin to my rough mockups above.

Hopefully some food for thought. I’m all for simplifying the UI as much as possible

I think if you’re going to base this on “I think these words have meaning X” now we’re having an argument about the meaning of words, which is a slow train to hell. It’s one of the signs that a conversation has degraded into something unsalvageable. Once we drag out “my dictionary can beat up your dictionary”, the discussion is effectively over.

Now. Bear in mind this new state is for categories only and most people won’t see it at all. So for the average user, this will affect you not in the slightest.

That said, It is a new notification state, and so it is true that adding a new state unavoidably adds more mental work in selecting which notification level you want, because the list of choices just increased by one … but as I said, only for categories. I guess conceptually you can think of it like this:

How many notifications do I want about (thing X)?

Once you handle the love/hate extremes, which I think are really quite clear, there isn’t too much subtlety. There is simply:

The default same-old same-old level of notifications everyone else gets, the standard, the usual

OK. So, all that said, I get the gist of what you’re saying – rather than add another named state for people to puzzle out, use additional clarifying words on what we already have. I think you might be right. So here’s what I propose:

You will automatically watch all new topics in these categories. You will be notified of every new post in every topic, and a count of new replies will be shown.

You will only be notified of the first post in each new topic in these categories.

I think for this to work as an exercise you need to write out the name and the description, as I’ve done above. Is that clear?

(Finally, any change to “watch” terminology is off the table. That ship has absolutely

You will automatically watch all new topics in these categories. You will be notified of every new post in every topic, and a count of new replies will be shown.

You will only be notified of the first post in each new topic in these categories.

I think for this to work as an exercise you need to write out the name and the description, as I’ve done above. Is that clear?

I think this is clear, and I also think that this would be a great feature. We’re trying out Discourse as a possible alternative to Mailman and a feature like this is something that myself and others in that trial have looked for but been unable to find.

I think this is clear and solves the issue of adding another named state.

Okay this is now merged into master.

Users can choose their notification level: 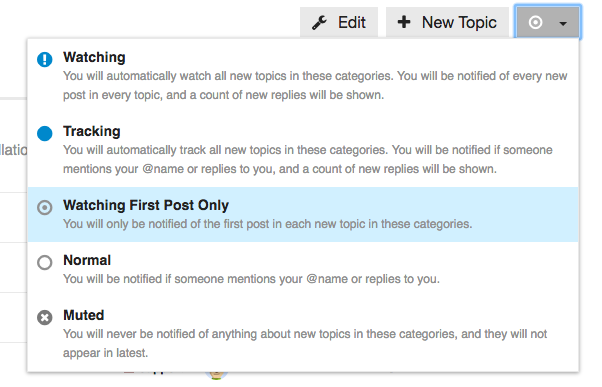 If you do that, when someone posts in that category you will receive a notification about the post:

Let me know how it works out for you all.

Sorry for the bikeshedding but isn’t Watching New Topics Only better than Watching First Post Only?

I don’t think so, if you are watching all new topics aren’t you… watching new topics?

First post is clearer and quite literal about what is going on.