Appreciation and recognition of good contributors are important elements in Discourse. This is why (among other things) we have an option to show publicly that we

Wiki editors also deserve hearts, don’t they? Implementing this shouldn’t be a big deal? In the edit window the same UI element with the same behavior could be added next to the information of the edit.

Wiki edit hearts would count just as much as comments hearts. 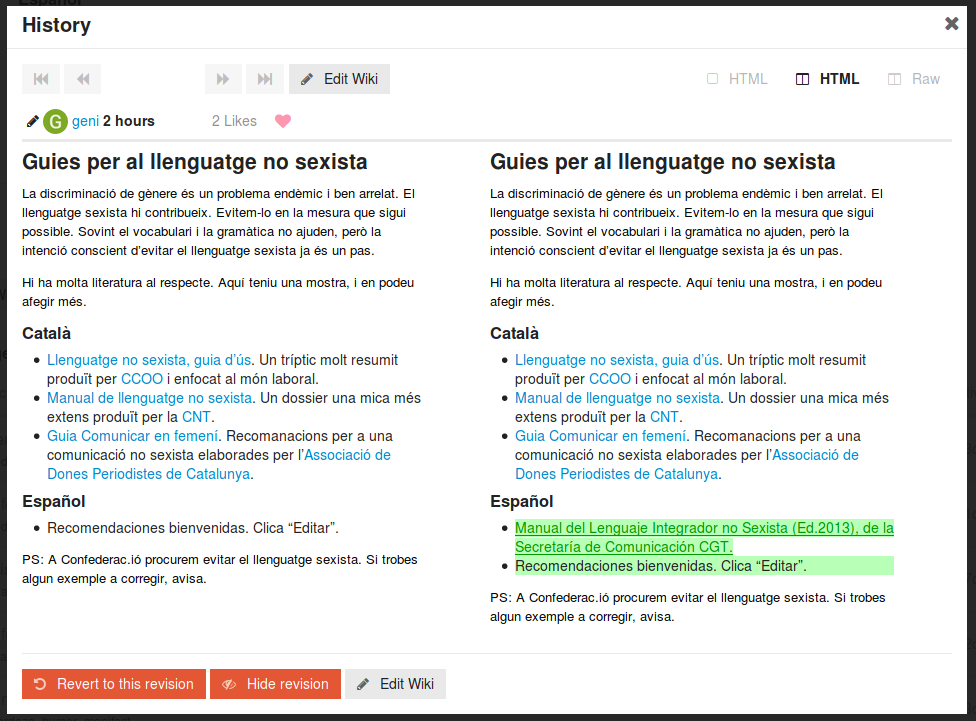 Hiding the like button in the revision history seems confusing to me. If this were implemented, I think the best way would be to build on the idea described here:

I think this is probably the best thread to continue this discussion, apologies if not. @sam, in this thread, you mentioned this idea: I like this idea, and think it could work well in my community (we’re considering moving our wiki from mediawiki into discourse). Is it something that would be considered as a PR to core, or should I be thinking about a plugin? Alternatively, is there now a better solution for allowing people to “watch/track” a wiki post for changes?

So every wiki edit would result in a new “mini-post” in the discussion:

OK, if such “mini-post” would exist, then showing how many likes there would make sense. Still, I think my mockup would still stand for the action of giving thanks.

A sincere wiki “like” implies to check the diff, just as a sincere “like” in a thread implies reading the comment liked. Placing the like button next to the diff is equivalent to placing it next to the comment. Otherwise the UI would be encouraging blind hearts.

But anyway, as long as wiki edits can be liked with hearts that count, I don’t have strong opinions about the UI.