Help us test the rewritten Composer

iPad composer behavior is problematic, composer appears and then disappears immediately (at least in landscape)

The pop up for adding links appears inside the composer instead of the main page:

Here is a fix for the selected text to link
https://github.com/discourse/discourse/pull/3891

I don’t want to ask too much of you all, but what would be the best way to add a simple new button (using a bbcode already existing) ?

For example a spoiler button using the [spoiler][/spoiler] bbcode

Based on the discourse commit and @cpradio plugin, I have something like that :

Is it a good start ?

That’s pretty close. Are you getting an error or anything, if you have it on GitHub, I can pull it down and see if I can get it to work.

A little update, @cpradio made a plugin that works, I was able to add some buttons myself, it’s pretty easy if some people want to add theirs : GitHub - cpradio/discourse-plugin-spoiler-ui: Spoiler Composer Button for Discourse

Minor bug, I don’t know if it’s the composer or the plugin, but the spoiler bbcode doesn’t work on the preview, but works fine otherwise

Also, not really a bug, but an observation. When we used an emoji (via the modal), the old editor added one space before and one after the emoji, not in the new one. Not really a problem though

edit : and finally, a little problem for european users, when we type the euro symbol (€ - shortcut : ALT Gr + E) it also opens the emoji modal.

Why the editor functionality was changed?

I noticed that couple of days ago, the Insert link functionality is broken. Then I started to notice that there are other broken functionality as well:

Basically all previous shortcuts are gone.

Besides that, if you select a text and add a link on that text, the text will be removed. If you press ctrl+k to insert a link, the browser (chrome, at least) will focus address bar, so you will need to move the mouse, click on the URL field, then add the url.

So I already submitted a PR for the link text, but I can’t recreate the other issues here on Meta, so I’m not sure there is anything to fix. Might want to make sure you are on latest.

I think he means, when us use the quote button without any selected text, nothing appears in the text area.

Not really a problem for me, but I think that’s what he meant.

For the code button, the default reaction was the 4 spaces, now it’s the one line version `'indent preformatted text by 4 spaces``. I prefer the new one personnally.

I think he means, when us use the quote button without any selected text, nothing appears in the text area.

Ah, didn’t notice that. I had only used it with selected text.

For the code button, the default reaction was the 4 spaces, now it’s the one line version 'indent preformatted text by 4 spaces`. I prefer the new one personnally.

Yeah, unless you have text, then it preformats your selected text using the 4 spaces method (when multiple lines are selected, if the text is on a single line it seems to use code fences. – cool

I think he means

I guess he means about (old) shortcuts on quotes, code and so on. But then he read this topic and he now understood why things are broken now.

When you guys will decide to normalize shortcuts with other editors, please compare to other markdown editors, not with editors in general (i.e. how the editor on stack overflow works?).

A small suggestion: please try to make a smart shortcuts for bold/italic. This means that if you press ctrl+i, you get the stars. If you start typing then press ctrl+i again another set of stars are inserted, when it should just skip the star.

Would be great if those things could be changed…

So whilst researching the quoted text button and list items only selecting the text that should change (which present a LOT of edge cases if you adjust them!)

It seems to reason that the line should actually read as this._selectText(sel.start + hlen, contents.length - hlen - tlen), for cases where the tailing tag being inserted is not the same length as the heading tag (think [spoiler]my test[/spoiler])

It’s not possible to see the bottom of a topic anymore when the editor is visible. The new editor seems to be layered on top of the posts.

Markdown links appear to be broken:

Markdown links appear to be broken:

No, it simply requires the http

Weird, I guess I never noticed that before. Thanks for clearing that up.

edit: I think I was just thrown off because the editor recognizes URLs without the http bit normally, e.g. www.google.com works fine.

Somewhat related to this topic: does the new composer help in any way regarding the possibility of having seamless embedded Discourse comments?

I’m seeing the same erratic behavior in Chrome on the iPad too.

Here is a screenshot: 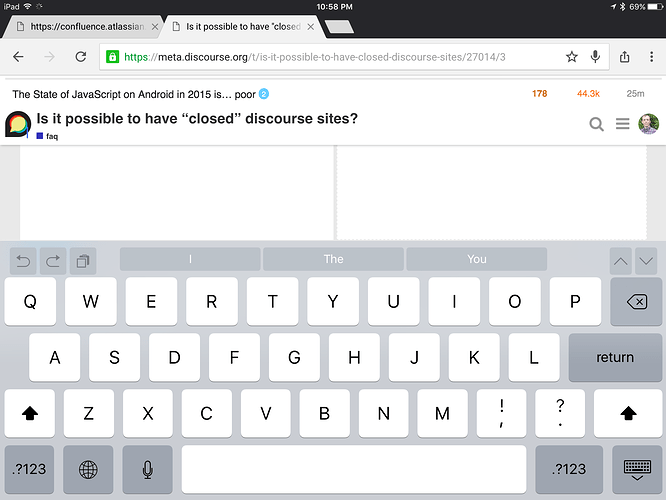