How does auto Highlight all code works?

but it doesn’t work as expected.

As I see it only works if code is indented.
But if that’s true why language recognition?

Could it be forced to recognize language?

Is it possible that first post in this thread https://online-excel-solutions.com/t/preformatted-text-vba-testing/358 is automatically preformatted?

I don’t know if the code highlighting works with indented code blocks. You may need to use three backticks eg. ```vb

I know that.
I meant that this would automatically recognize language and then code it.

Both codes in mine above link are just copy-paste. Without < / >.

In second post it format some parts by itself.

All </> does is indent whatever is selected four spaces.
If what is pasted in has lines that are indented four spaces they will be seen the same as if they had been selected and then indented. A common gotcha is pasted in code with # comments and underscores that get seen as intentional Markdown syntax when they are not.

I don’t know what the “generic” highlighter highlights other than Strings, Ints, and certain words common to various languages.

Where as on my sandbox with it enabled, I get 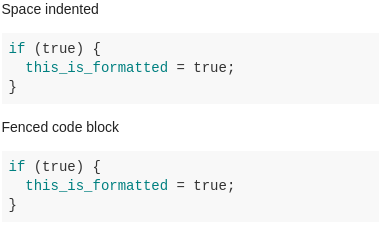 OK, so it means, when automatically set, it will change code block to fancy if space indented?

Yes. That is correct.