"Move" doesn't work if one of the posts is deleted

I had a user coat-tail on an old thread of his with what I considered to be a new question. Even better, he provided the logs in a 2nd followup post.

As I was about to move his 2 posts to a new thread, I noticed the option to combine them. So I did. That left an ugly, unrelated, deleted post in the original thread. So I picked it and the combined post to move to the new thread so that at least the deleted post would be in the proper context.

Here’s what happened next: 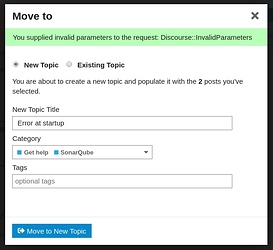 Deselecting the deleted post allowed this to get through to the next error, and left the ugly, unrelated, deleted post where it was originally added.

Related thread: Error is green(?!) and entirely devoid of details

You mean deleted but not suppressed, that is you did the post merge, which deletes one or more posts, and immediately then moved posts? Bit of an edge case.