Are there any plugins that use ideas from this topic/any others that help with long topic navigation?
Also is there something official coming out to help with this in the nearish future?

I looked around for a bit and didn’t see anything about either of the above. Sorry if I missed/for the bump.

Are there any plugins that use ideas from this topic/any others that help with long topic navigation?

Also is there something official coming out to help with this in the nearish future?

Nothing is coming in the nearish future but very likely in the next 12-24 months, its an area we want to improve.

I noticed the photos app in Windows 10 builds a timeline with breakpoints: 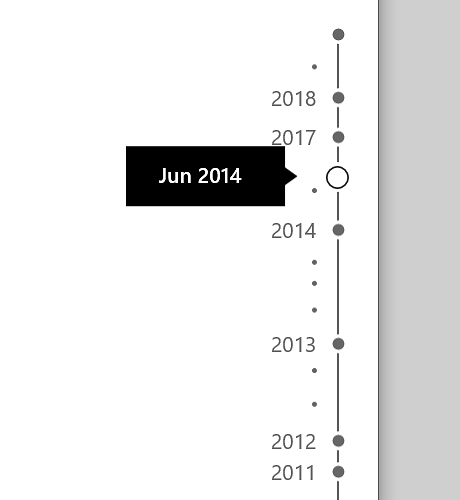 Possibly the second strongest is posts with anomalously large number of likes relative to the rest of the topic; could mark those with a

My forum is about crowdfunding projects and some discussions can last for years with dramatic inflexion points (like before KS, KS start, KS end, on delivery, 1st impressions/use after delivery etc.).

With topics running 1000s of posts, being able to spot those inflexion points would greatly improve the user experience.

Forcing new topics at those inflection points is the right strategy.

And if you can’t recognize those shifts the moment they happen, you can split the topic later.

Conversations about a crowdfunding project (games, in my case) are like a living thing. Going through many stages. With times of joy. And times for hate. You don’t change your child when he speaks for the 1st time. When hé reads his 1st book. Or when he leaveS home. You see it/him as a long, passionnate and emotional journey.

I like your adding support for identifying inflection. That is a powerful feature if it can be represented visually.

I also appreciated your observation that your users want to search the entire conversation since it’s inception.

But that doesn’t mean it will be worthy feature for most of us. If people really want to search an entire chain of split topics then a search option to do this might be a feature to develop in a plug-in. I’d vote for a recursive search that allows each previous topic in the chain to be searched one by one until the first topic. That way I could more easily see the context ie. the reason why the topic was split.

I also don’t agree that a long topic or a long journey represents the reality of a growing child.

Parents are always watching their children move into new things and leave old things behind. So it’s a real problem if I treat my child the same way in their current stage as their previous stage. The same applies to projects. Each new stage is an opportunity to present a clear picture of the key features of the next stage of development and how we are going to plan for it and recognize it. It is counterproductive to treat a project as if it doesn’t develop and never has anything that needs to be left behind.

It does work, and it works well. You do need some discipline to make topic splitting and multiple specific topics work. If your site has no discipline, the whole thing is kinda doomed anyway. Might as well just install a chat system like Discord and be done with it at that point.

Well, you know, that’s 5 years this forum is running. And was even able to run on bbpress before (and that was not a pleasure for me to admin it).

And it works fine. Some topics are getting close to the 10k post mark but they are very specific, one topic = one game. One could think of many ways to split it but the fact is, every time we tried some sort of splitting, it ended very poorly. My users love it that way, with all needed (and many more in excess) informations in one topic about one game (well, indeed, there’s often a second parallel one for group pledges. And that came from user request, they reached their noise tolerance).

Another way to think of my previous request is like a Table of Content for the whole discussion. I know there is a TOC for posts plugin. Yes, you can do it manually and had links to 1st post. But you cvan bet nobody will ever notice those links. Inflexion points, based on time or interest, close to the timeline, could be valuable imho.

Note that I sure can live without it. But I think it could be usefull.

You will have extreme performance problems the longer topics get. Without some discipline, there will be consequences, measured in more expensive server instances (more / faster cpu, more ram, etc)

Interesting use of this in the 538 democratic primary site, note “timeline” with chapter breakpoints on the left: 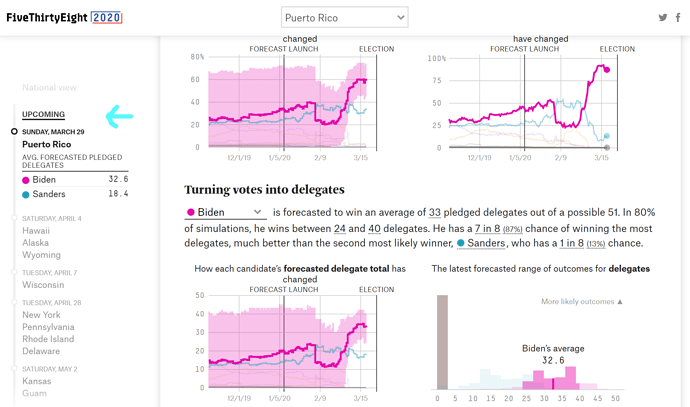 This changes as you scroll down: 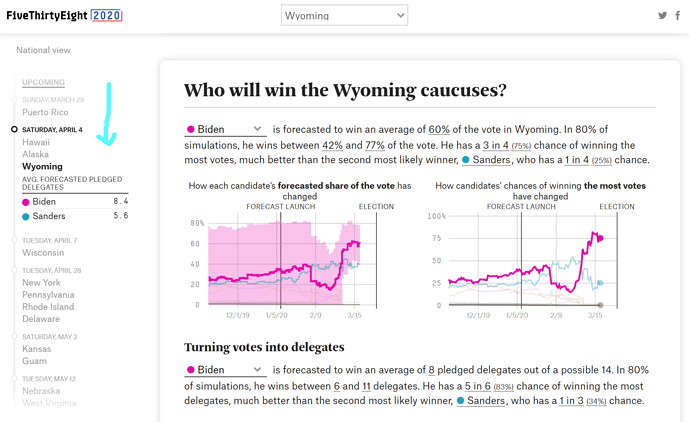 Another interesting idea of natural breakpoints in albums: which tracks are played the most? 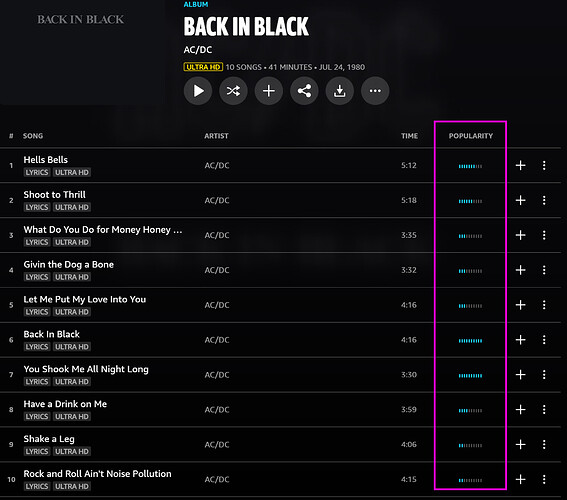 Yet another visual example from Google, this time building a set of deep links or chapter points in a video. 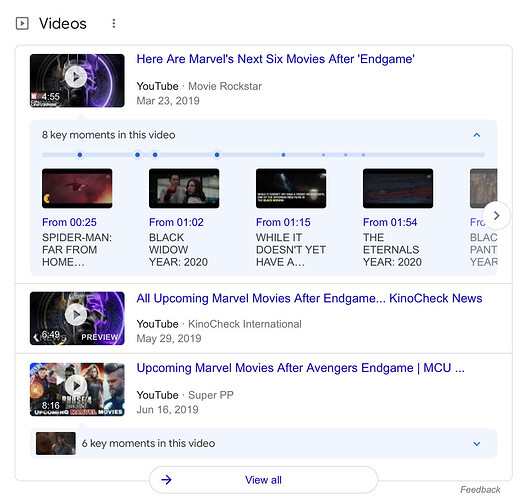 Note that these chapters are manually authored, taken from time codes in the video description!

I’ve been giving this some thought. From my experience with megatopics and non-mega, but slowly updating ones, users hate it if the topics they were watching get closed, even if there are replacement ones.

This suggests two possible fixes, both of which would probably need some help in core or in a plugin.

More details on each idea:

The way I see this working is mod selects a post and then clicks and all before and this triggers a new / modified create new topic popup. The new topic would default to same category, default to existing topic name with start and end dates, and default to creating a locked topic. The first and last (last being a system one) posts would have links to the main topic it was split off from. The existing topic would keep the first post, get a new post in the place of the moved ones (ignoring any other split topic special posts), and otherwise remain the same.

Probably would also want a rake job that fixes quote links in other topics, but that may be trickier.

This one is likely easier to do, but somehow also seems less satisfying to me. For one thing, links of the general form example.discourse/t/_/12345 (that is, going to the topic, not a post) become stale. Such links are likely if the topic is used by external discussion (“Submit ideas for the app here!”). When used, it would close the existing topic, change the title to indicate date span (by default), create a new topic in the same category copying title, first post and all tracking / mute settings. A link to the new topic would be added to the system close topic message in the old one.

Probably want to de-track / watch the closed topic for any user that didn’t participate in it. Scenario I thinking about here: User Elijah, who is active for a couple of months and then disappears for a year, who was explicitly watching a topic, might not care about the two created and closed middle topics that occurred while he was away, but might still be interested in following the lastest version when he returns.

A way to split a topic, or spawn a sequel, that copies user watch / tracking / muted settings to the new topic.

Welcome back, it’s been a while!

I’m confused; we already have this feature as of 1 or 2 versions ago? When a topic is auto-closed after reaching the 10k post limit, a new topic is auto-created and cross-linked to the old topic. Are you not seeing that?

I wasn’t asking for cross-linking. I was asking for “select here and ABOVE” to move to a new topic –or– copying watch status.

Any news on this?

Using the timeline vertical bar for this would be great. May I suggest the post length as a criteria? Some one-liner posts get sometimes a lot of likes but don’t work well as “topic milestones”.

Nothing at the present moment, but we do plan to eventually get there!