Hi everyone, I own and administer what I believe is one of the largest Drupal-based forums on the internet, getting toward 2M posts. Drupal 7 is dying, and Drupal 8/9 are turning into more of a framework for web programmers than a ready-to-use content management system. The new Drupal versions simply do not offer the third-party modules I need for my forum to continue with its basic functions, and thanks to the joys of PHP and Drupal’s many other quirks, the upgrade would be every bit as hellish as migrating to a completely different platform. So I’m going to have to bite the bullet and migrate to something else. I’m pretty sure it will have to be Discourse due to a unique aspect of my forum community’s style: I’m the only moderator, and it’s not my full-time job. So over the years I’ve used the flexible Rules and Flag frameworks in Drupal to create a piecemeal system of community moderation of spam and offensive posts, with automatic post removal and/or closing user accounts at certain thresholds based on the how new the user is and how many users have flagged it and also taking into account the newness and recent flagging activity of the users that flag it. In other words, it’s almost exactly what Discourse has implemented. I’m really glad to see that Discourse has recognized the value of community moderation and has implemented such a comprehensive and well thought-out system out-of-the-box. Drupal 7 was and still is the only CMS flexible enough to allow this sort of custom functionality without being an experienced developer, which I am not. So it’s looking like I’ll be moving to Discourse. However I do have some concerns.

Sorry for the long post. Thanks in advance to everyone for their insight, and many thanks to the entire Discourse project for this excellent product.

Post format conversion: Unfortunately the current forum uses a mix of pure HTML and Textile formatted posts. […] So I’ve thought about just doing some kind of offline find/replace on the database dump file with sed , similar to what is described here. Suggestions or solutions would be welcome.

I just ran across this: 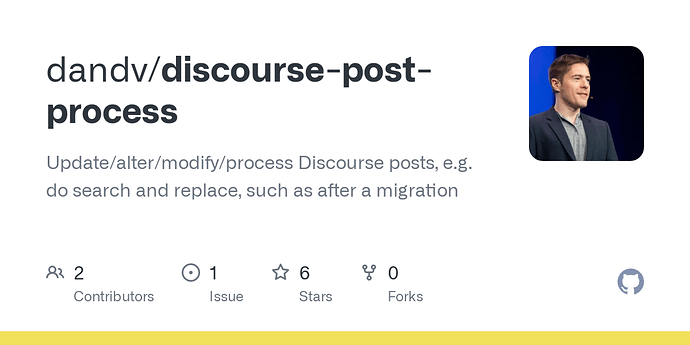 apply a set of regexp-based transformations, such as replacing BBCode tags with Markdown

It was last updated in 2016, not sure if it’s still a relevant option.

Redirecting Old Forum URLs to New Discourse URLs If you’ve moved from other forum software to Discourse using one of our import scripts, then you probably want all your hard-earned Google search results to continue pointing to the same content. Discourse has a built-in way to handle this for you as an alternative to writing nginx rules, using the permalinks lookup table. The permalinks table allows you to set two things: a url to match, and what that url should show. There are a few options …

Is this still relevant? In the Drupal importer script I’m seeing code like:

During the migration will it run in batches? What happens if it hits an error, after fixing it will it continue on or will it require starting from the beginning?

The script typically pulls in 1000 posts at a time.

It keeps track of what has been processed, so subsequent runs can skip data already run. I on scripts I’ve touched I also include an import_after setting that further speeds up subsequent runs by loading only recent data (also useful for testing with just a small subset of the data).

I would need to look more closely to see about whether posts are included in permalinks. They typically are not, but it can be done.

You’ll want all of your uploads on S3, so your backup will include only the database dump. You can’t really do anything to optimize that. You can either let discourse keep a certain number or tell it not to (or just set the number of backups to a big number) and let your rules handle it.

You’ll want all of your uploads on S3, so your backup will include only the database dump

Oh, that’s a very good point. Now that I think about it, I’ll get charged either way for upload storage on S3, whether the uploads go directly (and only) to S3, or whether they’re inside multiple tarballs from the Discourse backup.

And what about using a bucket with no delete permissions for the Discourse backups?

whether the uploads go directly (and only) to S3, or whether they’re inside multiple tarballs from the Discourse backup.

But if they are on S3 then you have only a single copy.

I suspect that it will work if discourse does not have permission to delete, though I don’t know.

But if they are on S3 then you have only a single copy.

Right, and with S3’s insane levels of data redundancy that would generally be considered a responsible way of storing uploads? I haven’t fiddled around with S3 options recently, but I believe they also have lifecycle rules to recover deleted files for a time period? I’m thinking in the event that the uploads somehow got deleted due to a mistaken call from Discourse, be it an (unlikely and massive) coding bug or user error. Or a hacking event, circling back to my original concern about delete permissions on the bucket.

Yes, you can turn on versioning so that files are not deleted when they are marked as deleted. If you don’t care how much space you’re paying for, you can do that. When Discourse deletes a file because it’s no longer used, it moves it to a tombstone folder for a while before deleting it. I recommend that you trust Discourse to manage the files. I don’t know if disallowing delete access will break anything.

You can put backups on a separate bucket with different permissions (but same credentials) if you want.

Question for @pfaffman or anybody else that puts uploads on S3 – I know it depends on a million factors, but do you have at least anecdotal information on the charges for bandwidth and S3 requests for a medium-large forum with its uploads on S3? Thanks a lot!