I have been thinking that this should be a user preference.

It is already in a way isn’t it? I have my browser “bookmarked” to my preferred landing page.

That really isn’t the same at all. You have to remember to use that bookmark, have it bookmarked on all the devices you use to access the forum and still if you click the logo it’ll take you to the “wrong” page.

I have been thinking that this should be a user preference.

However, if you make it a user preference in the sense that it would be a setting that hidden somewhere in the personal preferences menu, I reckon most users would never find that setting.

If you simply use the “last used” view, people can intuitively discover what works best for them, without have to explicitly configure any settings (easier)

Several power users of our Discourse installation think that /categories is best for new users to discover what kind of conversations are happening, but that they’ll eventually start to prefer /latest and after that decision, it should be the default for those users.

Having this exact same “problem” at Stack Overflow, my previous project, I can tell you that both solutions will leave about 50% of the people unhappy. Automatic can confuse people and mess up default home pages, Manual is work for the user.

This is usually a good sign that the setting should be a user preference.

There are also other topics on this here already, with lots of discussion, that reached the same overall conclusion.

There are also other topics on this here already, with lots of discussion, that reached the same overall conclusion.

One thing you can do, as they do on community.imgur.com, is make it so that the initial page is catgories, but all subsequent clicks on the home image take you to latest.

Here’s that code, since @ljpp asked for it, if you want to put it in Admin, Customize, CSS/HTML, </body> on your site:

BTW, I am very interested whether the user selectable home screen or this “remember the view” is on the development road map?

Me and my community love Discourse (<10% resist after migration from SMF), but this topic keeps coming up. The Latest view serves active regulars well, but may not be very welcoming for a non-frequent visitor or a newcomer.

We are just pondering our options with the staff, them being Latest, Categories or the Imgur way.

That said its not slotted for any release quite yet

While you are at it, the setting might need to be separate for Mobile and Desktop views. On limited mobile display real estate I find the Latest much more better starting point than Categories, but on the desktop things can be different.

FYI, I ran a vote on my userbase whether we should use Latest or Categories as default. The result was 50/50, so not much help for decision making.

Here’s an approach I can recommend to fellow Discourse admins, who have ongoing debate/concerns about the default view.

As I wrote above, after first two-three months my users were heavily split regarding the default view 50/50. That was not the end of the story however.

As the discussion regarding the views continued, couple of weeks later I set the Categories view as default for a week and then had another vote. The results changed dramatically, as Latest view crushed the Categories in votes (90/10 or so), and I started receiving requests to immediately revert back to Latest during the trial.

When we suddenly switched to Categories as default, the users quickly realized the benefits of Latest, especially in mobile. Nobody has been romanticising our decade with the SMF anymore, and have been happy campers ever since.

Hi Sam,
Any news on this feature? Is it still on the roadmap?

Our community is also split between latest and categories, and this feature would definitively solve the issue.

Not on the roadmap at the current time.

Thanks for the reply @codinghorror.

If we implement something similar for our Discourse community, we will keep you updated, un case others are interested.

I am putting a #pr-welcome here on a combo box in the user interface section. 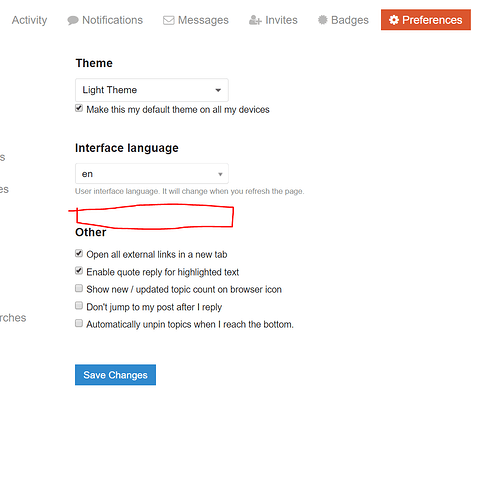 By default you pick whatever the forum admin picked, but you can amend it as you see fit.

If changed then going to home page of the forum or clicking the logo will take you to your preference.

FEATURE: Allow the user to select a custom home page

Thanks, this is now merged, deployed and announced:

Users can now set their own preference for their homepage. If you’d rather land on New instead of Latest when going to forum.example.org you’ll want this setting. [27] Head to user preferences -> interface and select the home page you want Implemented per: Remember the selected view / tab on homepage

to @notriddle for implementing