Continuing the discussion from Very secret info and email notifications:

“Secure email mode” site setting ensures that no content is leaked to the outside via emails when the site’s content is sensitive.

15 Likes
Is there a way to disable including the post body in email notifications?
Images broken in emails due to Discourse being behind a private firewall
codinghorror (Jeff Atwood) January 24, 2017, 11:38pm #2

Mailing list makes no sense in this mode, so I believe we can expect that it will be disabled.

I would still have comprehensive protection in place; if mailing list does get set, it will contain nothing but “a new post was created, go to the site to look at it”.

How about mailing participants the usual emails but encrypted with PGP, if they’ve uploaded a public key to Discourse?

This is how Bugzilla handles it, without a PGP key:

And with (of course, I use Thunderbird to actually read the decrypted contents of the email):

I think this would be awesome but I worry that it is a bit too ninja for the majority of users.

PGP support seems like plugin territory to me – but core should at least make it possible for a plugin to keep the content even in secure mode, for exactly this reason

We will not be doing anything with PGP in this spec.

A single site wide admin setting to enable/disable secure email mode is a good starting point but perhaps a bit draconian for most sites including ours. We have many users accustomed to using email to participate in discussions and we also have many topics that are public or, if private, not worthy of this level of security. It would be a shame to lose all that - though on the other hand it also might also lead to more engagement since people would be forced to start logging in.

Here are some other possible ways to bite this cherry

I’m also very interested in a secure email option (I was redirected here after asking about it in a new thread). I’m a little surprised it wasn’t available, given how feature rich Discourse is :). Other web forum software kind of have this by default, i.e. “there is a new post in thread X” … though I’d like even the thread name to be avoided. Would be happy with just a link to the thread and to the new post.

Also very opposed to anything PGP, unless it’s optional.

“Secure email” … isn’t that an oxymoron?

Just a note for when this is going to be implemented. The URLs should be sanitized too. For example, currently they contain the topic title which in many cases is revealing, they should be replaced with http://discourse.example.com/t/123/99 for topic id 123, post id 99 which already works fine.

Excellent point, @falco will keep that in mind as he builds it out.

“Secure email” … isn’t that an oxymoron?

Not if “Secure email” would mean what I expected when I opened this thread: The ability to upload my S/MIME public key to discourse and received encrypted emails in the future.

The RFC title should be “Void email mode”.

I’m handing this to @eviltrout so we can try to get something in this week and clear it off the 1.8 #releases list.

I would scale back the requirements a bit:

Digests will only have the big numbers section.

Perhaps just don’t send digests with secure email mode on, I’m not entirely sure what that would get you. And it’ll be simpler!

I’ve just merged in my first attempt at this. I ended up renaming it to private_email instead of secure_email following some feedback from the team. I think the new name works better because it’s about keeping details private rather than actually securing email.

^ oops I just realized the commit message was wrong. The key is private_email despite that message which I cannot update now because our master doesn’t allow force pushes

Here’s some screenshots of what emails look like when this feature is enabled. Whenever the Topic Title should be shown instead we show it as “Topic #ID”, and we remove all context posts and excerpts:

Inviting a user to a topic:

Receiving one of the many topic notifications (reply, @mention, etc): 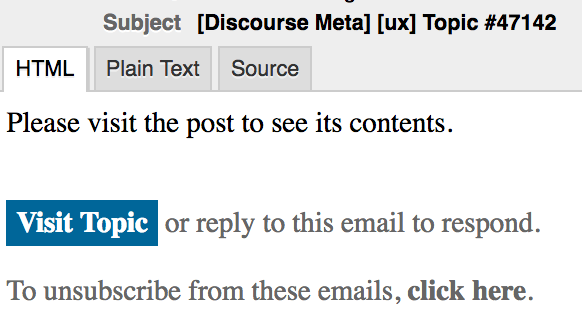 I’d love for people in the community to help us test this on their forums. I should warn you that Discourse has a lot of email templates and it’s possible I missed some, so it should be considered not 100% private until we’ve had some users test it out and report bugs.

I don’t want to scope creep, but they look terrible

Part of the problem is the templates they’re based on just don’t look as nice as Facebook’s. I think we’d have to add all new templates to look as nice.

So to be clear - this new feature functions as described in the OP? It covers all content on the site even topics in public categories?

Yes, right now if that setting is enabled all emails will be “privatized”. The links are still to the topics by ID, but the slugs are removed.

this is now complete per:

I’ve just merged in my first attempt at this. I ended up renaming it to private_email instead of secure_email following some feedback from the team. I think the new name works better because it’s about keeping details private rather than actually securing email. https://github.com/discourse/discourse/commit/bf9c4a7828c3c491a1f0cf3f33517806bb06c904 ^ oops I just realized the commit message was wrong. The key is private_email despite that message which I cannot update now because our master does…