If I go from the post back “up” (for want of a better phrase) in the hierarchy, I see a tick icon against the topic, but only if the summary view is that of a sub-forum, e.g. it doesn’t seem to appear at the main root forum level.

Is this by design or something which is configurable?

Yeah, the icons appear fine on the latest view but not on the category view.

By design or a blip?

By design or a blip?

Blip, that category design is new

Let me try a fix.

Phew! I always feel like I am asking for the moon on a stick

Any successes with this @Falco?

Just wondered if there was any news on this one as of yet?

Are there any updates on this one? I saw you liked my previous query but didnt say whether there was a fix or if one was coming? I thought from your initial reply that it was a “quick” thing but I may have misinterpreted your replt and obviously dont want to keep hounding you if its been logged somewhere as something to fix.

The fix is in and will deployed this week to your instance:

Hey @Falco- thank you so much, really appreciate the update and obviously the fix!

Just wanted to pass on my thanks to @Falco and anyone else involved. I have seen today that the Solution icon is now appearing, and, when closed, next to the Closed icon also -

Many thanks - really appreciate this

Just wanted to let you know that I spotted a minor issue, the solution icon doesn’t appear on the categories view on mobile. Desktop is fine, but not on mobile. It does appear on the other views as expected.

Here’s a screenshot to demonstrate; 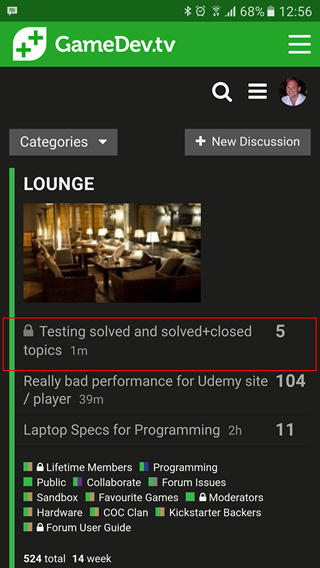 I had already closed the topic and had to re-open it and close it again, as before this it didn’t show up at all on this view, despite being the top topic on the desktop view of the same. Not sure why.

Just noticed that the Solution icon is now also missing from the topic title itself when you click in on it, despite it still being marked as solved on the specific reply? A padlock does appear if it is closed.

Thanks in advance for an update

Found another minor issue with the Tick icon not appearing for solved posts on the users activity page when filtering by solved, e.g

Padlocks appear for the closed topics. No Ticks though.

Found another minor issue with the Tick icon not appearing for solved posts on the users activity page when filtering by solved, e.g

Padlocks appear for the closed topics. No Ticks though.

I think it’s not an issue, you’re looking the solved topic list and you or everyone else click on Solved to see it.
Add the icons can be a bit redundant

I absolutely hear what you’re saying, I suppose I was just thinking from a consistenct perspective. If there was an option for “closed” presumably I would see all the padlocks at the moment etc.

Maybe but historically we don’t do this as it is a bit redundant. Look at the new tab, you don’t see new indicators on every topic.

Okey dokey, was just something I spotted last night.

Just a note of thanks for fixing the tick not showing on the mobile devices. Not entirely sure when it got fixed as I’ve only just checked / tested it, but guessing it was somewhere in the last couple of months.

Really appreciated - thanks to all - wonderful support as always