The newest version makes opening the rating topic too slow. for example if other topics would open in two seconds, rating topic opens in 5 seconds.

Can you give me an example of this? In my own testing on localhost, and on https://discourse.angusmcleod.com.au, rating topics load at the same speed as any other topic.

on the other hand is there an option to remove stars from below topic title and just let them be inside the topic?

here is all our rating topics.

you can open this one since it is the most rated topic.

you can open this one since it is the most rated topic.

Nevertheless, I’ve made some performance improvements. The first time you load the topic you won’t notice a difference, but subsequent loads may be faster, if the ratings plugin is having any effect on the load time.

Let me know how it goes.

but as I told previously, it was ok until some days ago I updated both discourse and this plugin to the latest version.

I updated the plugin, but unfortunately it didn’t have any effect imo. What is it that takes the most process in this plugin?

If it is calculating the average rating, maybe you could cache the value for, lets say, one day perhaps?

It could be a disaster for rating topics like mine that rapidly grows in number of posts.

However again I need to say that this problem occurred very recently in my last update (discourse core + all plugin). So maybe its because of one of your new commits, or even commits to the core discourse that caused the problem?

However again I need to say that this problem occurred very recently in my last update (discourse core + all plugin). So maybe its because of one of your new commits, or even commits to the core discourse that caused the problem?

Aside from the changes I just made, none of my commits in the last few months to this plugin would have had an effect on performance. They were style and translation changes.

So if there has been a noticeable deterioration in performance in those very large topics in the last few days, it is probably something core related.

I can take a look in more detail at what might have caused this in core Discourse later this week, but you should raise this with the Discourse team.

*edit @parisa You may want to have a read of this topic: Performance improvements on long topics?. Another host with a topic of a similar size (i.e. 4.5K posts) has the same issue:

Whats the performance impact of long threads? I have one that has escalated to 4.5K very rapidly and will keep escalating for at least 36 hours. Expecting thousands of messages, server is screaming. Will it help anything to close the thread and start a new one, a “part 2” to continue the discussion? Ping @codinghorror, @sam

So if there has been a noticeable deterioration in performance in those very large topics in the last few days, it is probably something core related.

Yes you are right. I think I found the problem. Its the new mixed text direction feature.

Quick question: To rate a topic do you need to post in it - or can you rate without making a reply to the topic?

Im asking as I would like to add a book review section to my site. Im not sure what is best: being able to add star rating with or without adding a reply/reason…

Now I have installed this great plugin.

I have a question to the styling

Maybe instead of not showing “no ratings yet” it would be better to show a type of “be the first to rate”?

I would like that if it is rated then show the stars. If not, show nothing. I dont want a list of “No ratings yet”, is that possible?

Could “7” and “17” in the blue circle is normally placed after the title. Is that possible?

I will take at look at both issues tomorrow.

Else show the icon for no stars yet (5 empty stars).

The mix of text and grafic is not eye candy, I think

I’ve removed the ‘No ratings yet’ label from the topic list. As you allude, it’s not really necessary there. That also fixes the unread count alignment

It’s still in the topic itself.

You can edit the text itself by editing the translation files in Admin > Customize > Text Content. Search for “no_ratings”. 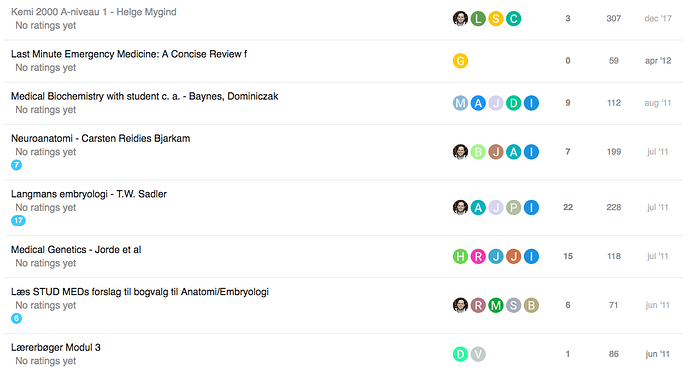 Any plans to solve this?

Apologies, this got left off my list. Now fixed:

And the rich data thing is neat!! Thanks

How add rating effect all category?

This plugin has to be turned on for each category you want to use it in. I don’t think it would make sense to have a site-wide setting.

Is it possible to have an option to enable this plugin only for group, staff for instance? Regular users should not see stars anyway.