This follows on some previous discussion on unlisted topics. My use case is that Discourse is our company message board for most internal communications, i.e. just among the employees of a company.

We’re quite an open company, but we have 30+ people who can read our staff message board. Most of the time, we want everyone to see everything, as soon as its posted. But sometimes we want to use Discourse to talk about something among a small group before making the discussion accessible. For that, Unlisted topics are perfect (and that matches @sam’s stated use case Invisible topics are not invisible).

Unfortunately that doesn’t work at the moment because not everyone can create an unlisted topic (as per previous discussion above). You have to create the topic, THEN unlist it, but that option is only offered after the notifications have gone round. So that only works if you are a member of a privileged group - i.e. you create the topic in the privileged group, then unlist it, then move it. That’s also a lot of clicking for something that I’d like to be routine.

that unlisted topics don’t appear in the site search. I appreciate that unlisted topics are not especially secured, but the defaults support the use case of “you can’t find them unless you dig”. In the same way e.g. our company email is on a shared server, and some people have root/admin rights to that server, I already trust those people not to dig around, and I’d trust the relatively light security defaults of an unlisted topic.

To make this useful to our company, the feature would look like this, whenever I create a new Topic:

So this screenshot implies at least three changes:

2 - is a big deal, because it makes the UI more complicated by default. It’s probably something that needs enabling as a new board setting, and defaults to Off, because it seems like too much of an imposition on lots of people that don’t understand / care for it.

3 - is another new feature, automatically listing unlisted topics after a certain amount of time (e.g. 7 days after last post?) Almost all the discussion I want to have on our staff forum - i.e. in a corporate context, anything truly private doesn’t belong there, and is already better served by email. But most of the time, I do want all our discussions to be public eventually. Making that process automatic makes sense, otherwise we run the risk of losing an interesting older discussion from searches.

But I can see that it changes a potentially compact two-way UI option into a longer-winded bumper box. e.g. without that feature, you might have a toggle switch or a checkbox or something smaller.

Alternatively you could ensure that unlisted & open discussions retain priority in the thread listing for the users that see them, e.g. listed after pinned topics, so as to remind people to either close or list them.

I imagine that “ability to create unlisted topics” is a privilege, or a board-wide feature, since not everyone would want the clutter (and then there’s another setting). So I hope I can see the costs of this feature reasonably. But I’ve tried to think about what the minimum number of changes would be, and I’m certain that implementing above would result in less email and more Discourse discussion at Bytemark.

If any developers had bandwidth to think about this, had any questions about our use case, I’m happy to elaborate on anything at all. We love Discourse, and just want to use it more

Couldn’t you use PMs for this? Message the private group, talk about it, and then move/convert it to a Public Topic (new feature that came out a few weeks ago)

Thank you, that is brand new information

I’ve asked for an upgrade, and will see if it solves my use case.

We could easily add it to the gear icon, we already do this for whispers which are conceptually almost identical. Can you take a look at adding this @tgxworld it seems maybe easy?

OK we upgraded and the PM -> public topic admin function does operate exactly how I want, thank you @cpradio. 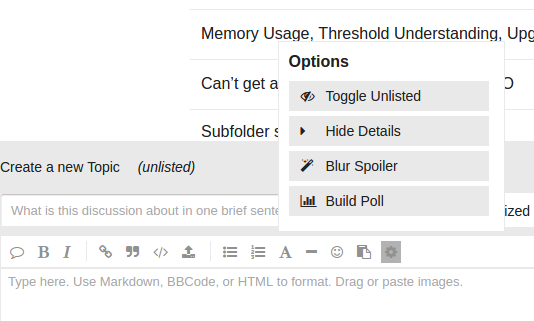 Thanks! Looking forward to trying it out in a release, though the private thread -> public also fits my use case.

We’re quite an open company, but we have 30+ people who can read our staff message board. Most of the time, we want everyone to see everything, as soon as its posted. But sometimes we want to use Discourse to talk about something among a small group before making the discussion accessible.

Doesn’t Shared Drafts cover this use case more precisely? Do we still need this post-as-unlisted hack?

Thanks for the prompting me about this new feature which I’ve just tried out.

It doesn’t cover our use case because the groups of people who might want to collaborate on a thread might be different. e.g. for one post it might be just me & the company directors, for another it might be with marketing and NOT the other directors. Both drafts would eventually become public, but I’d want different (often gradually expanding) groups of people to be able to see them.

So e.g. here’s a typical workflow:

I see, so this covers the “let random people see it” use case. That’s fair.

Is this still available and if so how is it enabled?

It is still available, nothing to enable. Staff (admins/moderators) can toggle unlisted when creating a new topic via the gear icon in the composer. 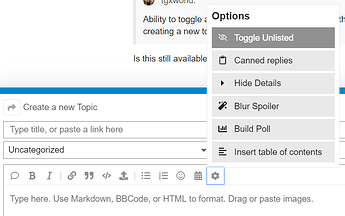 Ah ok, I was wondering if it might be an option for us normal users since the ability to add members to group pms is not working at TPM and apparently whoever supports it in development at TPM is going to be out for quite sometime…

On this, is there a setting that would allow unlisted topics to be created by users at certain trust levels?

There is not, no. And I do not believe there are any plans to add such a feature. Unlisting is a staff (and TL4) feature.

Get to trust level 4 (manual grant only, so talk to staff on your Discourse instance) and you can do it.

Thanks, it might be useful to allow TL2 to do it as well but require moderator approval…

Also, a nit. Would be useful to include them in a persons bookmarks, seems that the “unlisted” aspect of them applies there as well…

3 Likes
How do I archive (or close) a topic without bumping it?