I have noticed that the system automatically blocks some new users. These appear to be normal users who don’t have the same IP as anyone else and in most cases haven’t posted a single thing. Why are these users blocked?

Chances are they are either posting extremely fast, such as clicking reply, pasting something and hitting the reply button within 3 seconds (this is a site setting).

Or, they are getting picked up via the Needs Approval queue.

So…the other day (well, 14 days ago, but I forgot…) we noticed that a user on Stonehearth was blocked, and we can’t figure out why! For the Discourse devs, here is the PM where we discussed the randomly blocked user: http://discourse.stonehearth.net/t/did-anyone-block-a-user-lately/20556?u=jomaxro Both moderators (myself and @8bitcrab) and admins (@sdee and @brad) on the site checked the logs, and we confirmed on Slack that no-one initiated the block manually. No posts appeared for approval …

If they get picked up by the needs approval queue does the system block them?

Yes, until the post gets approved or the user manually unblocked.

For fast typing, they are simply blocked (I think, I don’t think it goes to the approval queue, but I can’t promise that). I can’t say that I’ve ever come across that scenario in our instance (or at least I don’t think I have)

That’s crazy! We should at least be notified.

This is 100% totally incorrect.

What generally happens is, mods decline the new user’s post for whatever reason and thus they stay in a blocked state. What is the correct way to handle a new user where you have declined their first post, but somehow decided not to destroy their account as a spammer?

I assumed there is more logic than typing speed to make posts show up in Needs Approval and there isn’t any way for me to know which of the logistical parts are what invoked the post to go to the queue. Maybe speed is the only factor, which would surprise me, considering the data I’ve seen hit the Post Approval queue.

I also mis-remembered the logging change that occurred recently that was entirely due to speed of reply and blocking users.

To be clear this is what a blocked user looks like, notice the “crossed out / no” symbol next to their name. 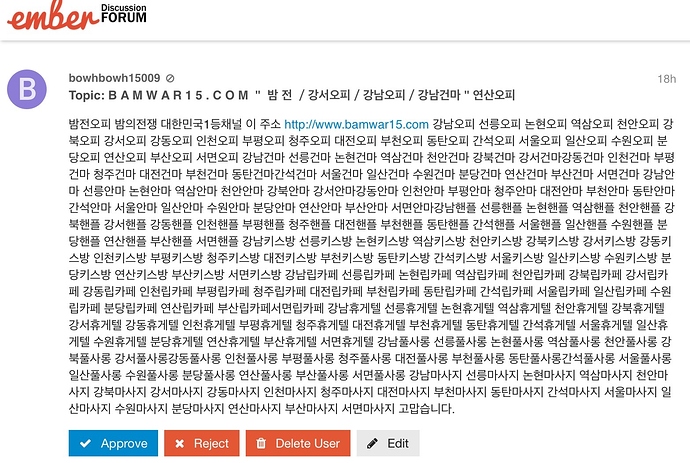 Rejecting their post here will NOT unblock that user… and blocked state is on,y really automated on new users making their first posts, a time when we evaluate the user’s posts closely for spammy characteristics.