Users per Trust Level -numbers not updating on admin dashboard

I run the latest docker install and after being frustrated for a looong time about how my users aren’t getting levelled up, I noticed that they actually are but the numbers on the admin dasboard are just stuck. They have been unchanged for at least weeks now, but if I look at /g, it seems to show the current real numbers. (Or at least the numbers on the group pages have evolved.)

Is there a way to force reset those admin dashboard badges or somehow debug the issue further? I love the admin dashboard page as it’s so information-rich so I’d very much love to see the trust level numbers from there as well

If you can run a rails console : Discourse.cache.clear should update it, it shouldn’t be needed though. Will investigate later to see if I can repro.

So my config is app.yml, I did the following:

then from the commandline:

…but the stats are still different on admin dashboard and on groups page. They just show different number of users. See attached screenshots. 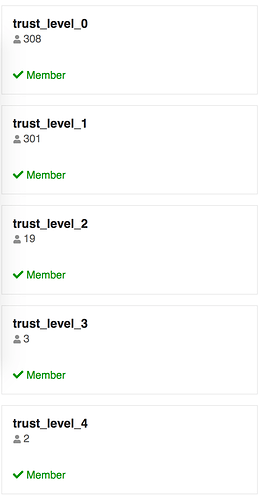 Dashboard numbers are exclusive, while groups are inclusive.

You have 3 users in TL3 but two of those are also TL4.

Dashboard numbers are exclusive, while groups are inclusive.

I’m still a bit baffled by the dashboard numbers staying the same despite new users joining via SSO, but maybe that’s just my flaky memory and not an issue with the system

Thank You for speedy responses