What would you like to see on your Discourse 2.0 Admin Dashboard?

Basically, everything they show is very helpful and informative for someone focusing on growing a community

I think a good metric would be the number of unique contributors.

I’ve been working up a localhost PHP script that works with the Users CSV export file.

One thing that I think has potential wide spread usefulness is what I’m calling “longevity” or “retention”. So far it:

So far it is only an overall “snapshot” and isn’t intervals, but nonetheless gives interesting results.

I may have missed a comment about this, but here goes. While I realize I can get some similar data from my analytics, the following would be great to be able to access from the admin dashboard.

Under the “Top Traffic Sources” and “Top Referrers” section, it would be great if you could click to see what topics are having the highest traffic for that given point or month. It would also be great to be able to see a longitudinal history (longer than 30 days) for those two sections as well.

Any news or prototype of the dashboard?

Sure. Here is a hifi prototype that @awesomerobot did of my initial design.
@joffreyjaffeux is currently working on a v1 which will be shipped with the 2.0 release.

That may mean that not everything you see here will be included in the first instance but we’ll iterate.
Also note that there will be a separate moderation dashboard in the future. 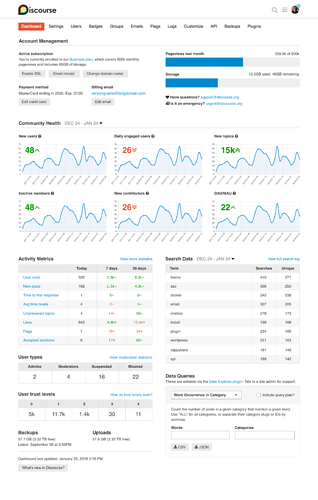 This is a fantastic start @awesomerobot / @HAWK / @joffreyjaffeux I am assuming most of the above metrics will be available for non-hosted, except for obvious ones of course

Yup, that’s the plan. And thanks.

New dashboard looks great - I like the format for the community health metrics, as those charts show a lot more detail than just “up” or “down” from a previous period.

Including a section for data queries is also great. Does Discourse ship with any pre-loaded queries in Data Explorer? It looks like it should be a great way of helping CMs to start exploring their forum data, as I’m guessing that many people don’t venture into the plugins area very often.

Does Discourse ship with any pre-loaded queries in Data Explorer?

Not at the moment but I like this idea.
Impt to note that DE isn’t available on Standard hosted plans we we need to figure out how that looks.

Is it possible to add a hook which identifies if the plugin is installed (for self-hosted) and loads it on the dashboard? In addition those preloaded queries would be great to include the queries for those graphs

Important to note that I considered doing that while writing it, but couldn’t come up with a good list of what to pre-load.

What I am realy missing for my self hosted instance are some hardware information, like memory, diskspace and cpu usage. That would be awesome.

Important to note that I considered doing that while writing it, but couldn’t come up with a good list of what to pre-load.

All good, that’s my area of expertise. Although TBH we used to measure pretty different things only a couple of years ago. The things we used to KPI ourselves on are now considered vanity metrics.

That’s outside of our scope I’m afraid. We don’t have a reliable way of providing that information across all instances.

That’s outside of our scope I’m afraid. We don’t have a reliable way of providing that information across all instances.

That’s where monitoring with Icinga or Prometheus kicks in. You’d also want to ensure that Docker is running, and many other things in the background. I do understand that CPU, disk usage and memory is more easy to find out about but always consider that the application is running inside a container. Which runs isolated and may not necessarily fetch host system information that easy.

Here’s an example of which additional services I do get notifications for. One may consider adding such as a custom URL into the Discourse dashboard, maybe. 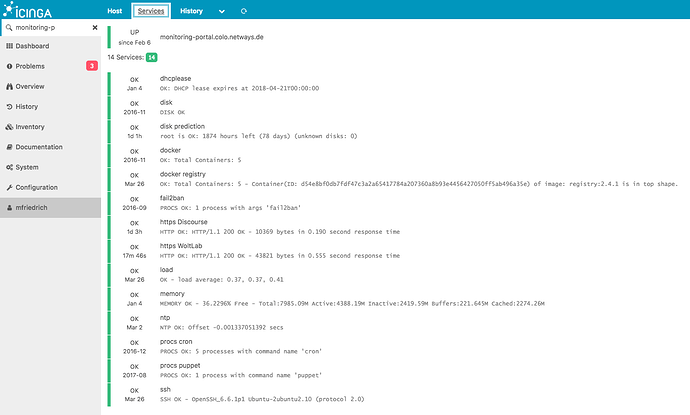 Maybe one could collect some metrics from inside the running container, I am not that deep into the Discourse backend yet. Would be interesting though, also to have them exported via the Prometheus exporter plugin.

Not what you’re asking for, but Digital Ocean will show that on their dashboard.

Digital Ocean will show that on their dashboard.

That would recommend using Digital Ocean as hoster, that no solution for me.

What I dont want is complex monitoring, just the possibility to take a quick look and see that my system is or will not out of ressources. But as it is not at the scope of discourse, its ok for me. Was just an idea.

I like that idea, some sort of self-monitoring. Do you know Graylog (for logs and event collecting) … this also has a memory usage indicator. Differs from the stack though, Java has access to these metrics. I’m toying with the idea to look what’s possible with Ruby here, but it will take some time.

I’ve seen that this is now in Git master (experimental, cannot get it to work in prod right now).

Since I’ve also read about PostgreSQL 10 as backend, I was wondering if the inner components versions could also be displayed in the admin dashboard. Like PostgreSQL 10.x.y, Redis 4.x, Ruby 2.5.0 and so on. This would allow to identify specific build versions better, and help with troubleshooting. Although I do understand that this requires queries to many backends, and likely should be cached somewhere in the database during upgrade/installation. Just an idea

We have redesigned our admin dashboard at /admin [dashboard-design] In the next days I will be finishing this and moving towards a v1 which will be in the next Discourse release. Please refrain yourself to write a long bug report for a few more days, I will post it when I think “it’s done”, but do try it and please give us an early feedback on what you can try and this mockup. I’m very excited to finish this and give you this new dashboard. One of my personal goals with this revamped dashboa…