A better "site not available" page

I just loaded this Disourse site and got this: 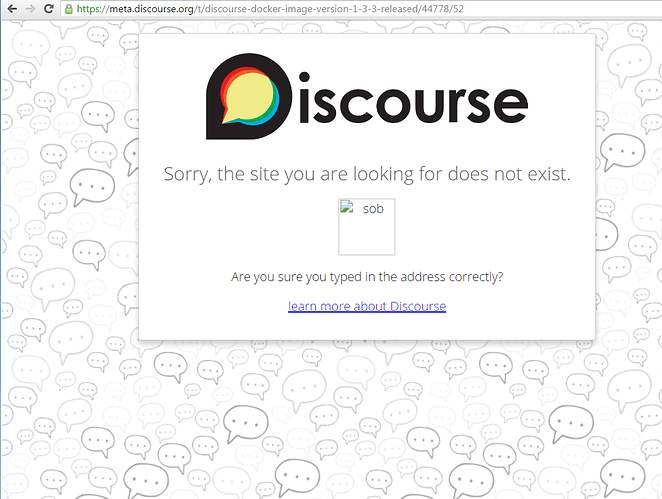 (I am not asking what happened here - I presume you were rebuilding the docker app or something, it doesn’t matter.)

My query is: How are you achieving a nice error page like this? When I rebuild the app, I just get “502 Bad Gateway / nginx”, something like

It would be very nice to have a better “site offline” message. Perhaps this isn’t the purview of Discourse (since if the app is being rebuilt, the webserver is offline, right?), but if any pointers would be appreciated.

We serve the “offline” and “site not found” pages out of haproxy, which runs in front of all our sites (and doesn’t get “rebuilt” in the same way a Discourse instance does). You could teach nginx a similar trick, with the error_page directive and specifying a custom (static) page to load whenever a 502 would otherwise be served.

I’m running such a setup on two instances. Actually, it was quite easy:

My outer nginx is configured as described here, and then I simply added an error_page directive and a location for the error page itself:

You might want to set up a nice-looking discourse_offline.html – unluckily, I only have an ugly one

This will not take care of the 502 Bad Gateway served by Discourse itself while it is starting up, though.

Would you be interested in writing a #howto for this? I believe @erlend_sh could even sponsor it!

I might be able to squeeze that in over the weekend, but I cannot promise anything.

How about an edit to the standard Discourse app, in which as soon as nginx is starting up, it serves a nicer “hang on a sec…the site may be under maintenance…try again in a moment” message, instead of the unintelligible (to the average user) “Bad Gateway 502” message.
Then after, say, 1 minute, the default 502 error can be served (in case there really is a bad gateway).
Not sure how to go about this though.

I’m building a #howto for this soon-ish – hang tight

We now have instructions for this:

This guide is intended for advanced users, who are already using nginx outside the docker container. By following this guide you make your setup more complicated and will loose some speed benefits like HTTP2 if you’re not running Ubuntu 16.04 or later. Proceed with caution! When Discourse is rebuilding or starting up, your users will usually either see an error message from their browser… [image] …or a not-so-nice 502 error message from Nginx: [image] If you’re a perfectionist l…