thanx on great plugin.
Unfortunately not working for me.
I am on 1.7.0.beta1 version
I did install it only on containers/app.yml
without editing settings.

It is installed and activated on admin menu.

When I type IMMO nothing happns.

Is this still working @tgxworld?

This plugin is definitely broke. Dialects work differently since the completion to ES6
https://github.com/PoloGT/abbreviation-discourse-plugin/blob/master/assets/javascripts/abbreviations_dialect.js

We are shipping this to a customer, so we have to fix it @sam @tgxworld

So i have this code in a file called abbreviations.js.es6

is giving me some headaches. Can someone give me some advice on how to reach Discourse.SiteSettings from there?
It works in the client, (i.e the preview window), but when I try to save the message that line gives an error, there is no way to save the message. 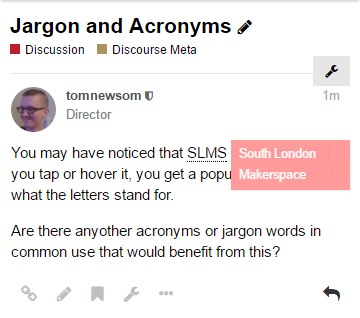