I remember there was a great topic once explaining the usage of the poll-plugin, but even after searching the forum for 15min I can find it (found a reference to it, that leads to a 404 though). So in case that is already implemented, please let me know how to activate it and move this out of this section

Love the polls. We are using it internally to gauge interest and make participation easier. It also acts as a replacement for doodle. One thing we are using it for is to easily pre-organise events, for e.g. asking who’s gonna come and what food they want (and having emoji in it, makes it awesome): 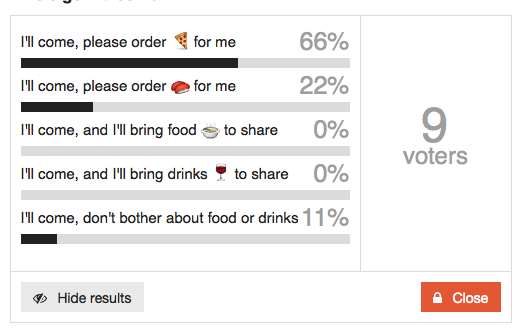 However, the “relative” counts are really irrelevant in this case for us. So when looking at the results, to figure out how much pizza/sushi to order, I have to make the reverse calculation. It’d be great, if I could configure the poll to use absolute instead of relative numbers on a case-to-case-basis.

I remember there was a great topic once explaining the usage of the poll-plugin, but even after searching the forum for 15min I can’t find it (found a reference to it, that leads to a 404 though).

I guess this is the new canonical guide:

On the blog? Really? Is that where I am supposed to search for official feature documentation now? What’s the how-to section for then?

Anyhow, Thanks, @erlend_sh, that’s exactly what I was looking for! I see it doesn’t have support for absolute numbers atm ;).

At a minimum we would be fine with a PR that add a “title” attribute to .percentage that describes how many votes total there are.

Maybe also a “hint” to work in “total” mode, but that is up to @codinghorror to decide.

I think adding a “results” attribute which defaults to “percentage” but can also be set to “total” shouldn’t be that hard. Most of the work is done client-side anyway.

Would a PR doing that be accepted?

Of course it would be

We just came across needing this with a vote of over 100 people where we needed the actual numbers and didn’t realize this was an issue. If this gets rendered in the could someone point me to where this gets done in the code and I could try taking a look at it?

If you have the data explorer plugin installed, you can use a provided query at /admin/plugins/explorer?id=-16 to get the full results.