I’d like a group to be visible to Admins & Moderators and group members. Initially I had set the group’s visibility to “Group owners, members”, but this excludes moderators. The next closest option is “Group owners and staff” – this allows moderators to see the group, however, then the group is hidden to group members themselves.

So it appears there isn’t currently an option that would allow just staff (moderators and admins) and group members (and presumably group owners as well) to see a group.

I was curious as to if you found a way to do this? Any progress? I’m in the same situation as I would like moderators to have access to view all Groups but not be Admins. Does anyone know if this is possible? 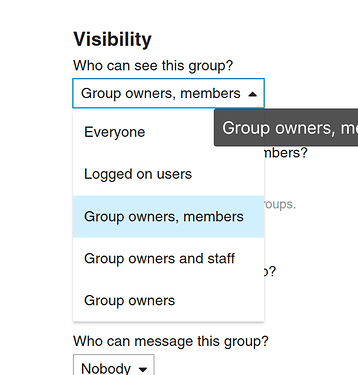 This is certainly odd on a few fronts.

Not matter what you do “admins” are going to have access. The word staff there is a bit misleading.

I guess I support changing it to:

It seems super odd to lock moderators out of the group visibility except for extremely rare cases.

@codinghorror you good with this change

I am not sure we need one more option here.

It is changed in the below commit.

FEATURE: moderators allowed to view groups which members can see.

Sorry I’m late to the game here but I’m not sure if this is right anymore with the introduction of SiteSetting.moderators_manage_categories_and_groups. Should we only allow moderators to see groups with a visibility of Group owners, memebers only if that site setting has been enabled?

@jamie.wilson Do you have any thoughts about this since you have the full context surrounding SiteSetting.moderators_manage_categories_and_groups.

The site setting doesn’t, and shouldn’t, impact group visibility. If the setting is on, moderators can only manage groups they can see. Just like it worked with categories before the setting was renamed and expanded.

Ah icic. I had the impression that if the site setting is turned on, group moderators are allowed to manage any group which isn’t the case as you’ve pointed out.

Right… This leads to a possible scenario where a moderator could make changes to a group such that they can no longer see/moderate that group.

(If a moderator was to make such a change by accident, they’d have to get an admin to change to the group visibility settings.)