Sometimes when I impersonate someone (albeit, not very often) I forget and keep trying to do admin type things and then realize I’m in someone elses account.

Another downside of the current process is that you have to click on the users avatar. I was impersonating a users that had 5 new notifications. When I clicked his profile, so I could log out of his account, it marks those notifications as read and no longer shows the (5) badge showing he has new notifications. How sad for him, when he returns! Hopefully he got some email notifications that will pull him back in!

Another community that I built and currently manage, is on the Higher Logic platform. I can’t tell you how much more I enjoy using Discourse than Higher Logic. But, now that I have that out of the way, I will say that I do like their method of impersonating users… 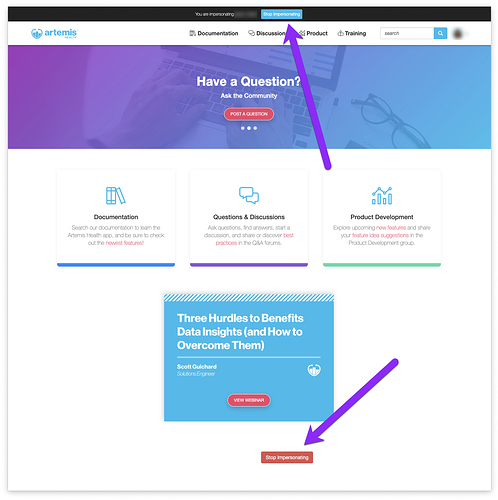 There’s a bar at the top of the screen, providing a constant visual reminder that you’re impersonating and a button to STOP, as well as a little orphan button at the bottom of the screen allowing you to STOP.

I don’t think they need both buttons. Top of the screen is sufficient.

I love @John_Lehmann’s suggestion with a more bold/obtrusive bar that stands out so you remember to get out of the user account before posting and doing other stuffs.

Not critical by any means.

I just came to meta, to see if there was a plugin for this, or something.

Just ended up needing this today. I use the impersonate feature to post category guidelines, or other pinned topics or replies in them under the @system account. What I currently do is post them under mine, then change ownership to @system, but what if someone has the topic set to watching, then they would see that it was me. I’m not necessarily trying to be anonymous when posting these, although, I just don’t want those posts under my name. I could make an alt whose purpose is to post these, although I would have to log in from a private window each time, which is bad ux.

I’d also like to be able to revert to my user account when done impersonating. This is possible with all of the implementations I’ve used for this feature in WordPress.

I agree, it’s not essential but it’s a huge change and I don’t think that putting a banner at the top with the logout button is so complicated… we could probably make a plugin but surely a simple change to the core would be better.

Impersonate was always a super sharp tool that was implemented as kind of a hack.

A non-hacky implementation may be significantly less creepy and far easier to justify as a default feature Discourse has.

Overall the feature is very useful for debugging things, but acting on behalf of someone else is super dangerous.

@sam agree sorry for the tag, but I’ve been randomly bringing this up for years and it’s a big deal for some. Impersonate is the one feature that makes user privacy a serious concern with Discourse, especially if using Discourse for an internal (work) communication and collaboration platform.

We have used it in the past, and are bringing back a discourse instance for use in our union. Not for the membership, but for the elected officers. For the time I administered the old instance, I was a regular representative like most. I’m now in leadership/administration of the group, so my role in the organization would not be at odds with a discourse admin’s abilities to see all materials within all categories. But it did then…

Our executive group had serious concerns with an admin having the ability to view their discussions within their (executive) privileged category. I hackily solved by hiding it from non executive group members with CSS (including hidden from admin), and pointing out how to view the logs to see if I ever disabled the specific theme component called “user privacy”.

The other MAJOR concern was an active representative who is an discourse admin (again rather than an a contracted IT guy) could just impersonate another user, read private messages, and tinker around in someone’s personal settings and goods.

All I can say is it would be great if there was possibly a way to focus on admins not having global viewing privlidges, but rather more of site administrative access, defaulting to only see contents they are assigned to. Plus a clear notification system to designated for all users to highlight if the admin staff is tinkering with this kind of stuff.

Call it something similar to discourse teams, maybe discourse professional. Something that’s not meant as much as an Internet forum but more of a business knowledgeable, collaboration and communication platform. Discourse would SHINE in this role, provided the admin eyes on everything capacity can be limited/curtailed or eliminated. (most centrally impersonate and reading messages vis profile/messages tab).

I found this the other day, where I have many private categories that show up to me as an admin, yet I wanted to see the how the topic list would look to someone at a T0, T1, etc., level.

Maybe this feature already exists and is separate from the impersonate function, I guess that beyond this, I’m not sure what else people use impersonate for.

Would this function suffice for most?

There’s so much on this subject over in The Impersonated user should be notified that they are being Impersonated. I still agree with the conclusions arrived at there. tl;dr it’s a rabbit hole, admins can do everything, if you don’t trust admins don’t have admins.

I also like the idea of an admin setting to disable impersonation, default disabled. Doesn’t even need to be a hidden setting but having the setting, like backup restore, will lower the risk that someone will get in the habit of impersonating another user or do it by accident.

Impersonate is the one feature that makes user privacy a serious concern with Discourse, especially if using Discourse for an internal (work) communication and collaboration platform.

I still agree with the conclusions arrived at there. tl;dr it’s a rabbit hole, admins can do everything, if you don’t trust admins don’t have admins.

If they have control of the system they have access to the data. You need admins you can trust, and your users need to be educated that there’s no expectation of privacy. That’s true of all software being used for communication and collaboration, even if you’re employing encryption across the piece.

You can’t even truly audit access to categories and PMs, any determined bad actor admin with root access can just grab a backup from the filesystem and read them directly from the database.

This is a great point. There are probably still some cases where impersonation would be useful, but this would almost entirely eliminate my need to impersonate users.

There are probably still some cases where impersonation would be useful

Everytime when an user have some strange issue that admin or his/hers pseudo-users can’t find or no other or just few users report.

Privacy is a relative question. I claim most of forums are in situation where an user doesn’t have anykind private info. So, impersonating should at least be an option. Automatic notice when it happens is not bad idea at all, even it is quite often unnecessary — but it is more open solution.

For the record, a trust level impersonation has been suggested here:

There have been a few times recently when I needed to see what something looked like from the perspective of a non-privileged user. What I’ve done was find an example user & “impersonate” them. When I’m done, I have to log out & back in. It would be nice if I could stay “me” and just temporarily downgrade what I’m seeing.

I think that’s fine, I always viewed this as a developer debugging feature, not a real “feature”.

When you’re impersonating somebody and you’re done, you have to sign out, the log back in and complete 2FA if you have ti setup.

Instead, in the user menu there can be a button that says “Stop Impersonating”, and when you click it, you will be logged into your account.

I personally think this would be a very helpful feature when impersonating.