Note, that Cache-Control headers are missing in the response headers

Ideally, the web server should return the following HTTP headers in all responses
containing sensitive content:

That is a library called logster.

You can send a PR to GitHub - discourse/logster: Log viewer UI and framework for rack

I want to add headers for this route. 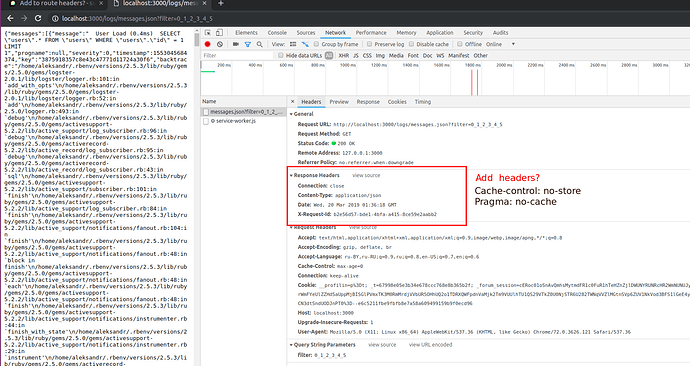 Yes, I got that. The entire /logs route is handled by the aforementioned library, so you will have to hack on it.

can i override methods from my custom plugin?

I think this will help in resolving the issue
add to nginx
location /logs/messages.json {
}

How to do this through middleware?

You could submit a PR to discourse_docker that added those headers via nginx (note: I have nothing to do with accepting a PR, but this seems reasonable).

And there is no easy way for example?

You have already identified the solution. You don’t need a plugin. Adding a few lines to your app.yml is easy and requires no plugin.

See Subfolder support with Docker for examples of how to modify the nginx config in the yml file.

How do I add these settings in app.yml?
I could not get

The Hour of the Dead was when men died. And when a man died, they sent him home by clacks. Moist’s mouth dropped open. ‘Huh?’ ‘That’s what they call it,’ said Harry. ‘Not lit’rally, o’ course. But they send his name from one end of the Trunk to the other, ending up at the tower nearest his home.’ ‘Yeah, but they say sometimes the person stays on in the towers, somehow,’ said Jim.’ “Living in the Overhead”, they call it.’ A lot of what travelled on the Grand Trunk was called the Overhea…

Great! Glad you got it!

Hey @falco. Does this seem like something that should be added to the web template?

Hey @falco. Does this seem like something that should be added to the web template?

No, that should be handled in the library code.