Unicode 9 added a :shrug: emoji which I’d love to use right about now. http://emojipedia.org/shrug/ indicates that it’s available in all five of the standard sets available from Discourse (Apple, Google, Twitter, Emojione, Microsoft/Win10).

I’d love to see Discourse adopt all of the new stuff in Unicode 9.

Discourse 1.8 is supposed to include newer Unicode stuff, see #releases

The current emoji set is the Unicode v3 release. Shrug is v4. I expect v4 will be part of the work done in Discourse 1.8, but I’m just an observer here.

We do plan to upgrade emoji, personally I find having skin tone support to be something super important.

I do not think it will make the upcoming release but very likely the next one.

Twitter has a pretty excellent emoji selector with skin tone support we should totally emulate. 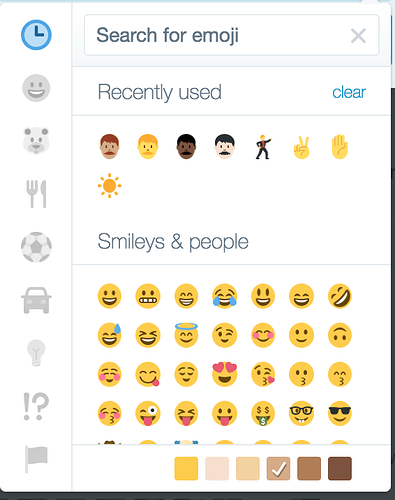